A superb sunrise and clear blue sky.....Brents calling, Oystercatchers piping, Wigeon and Shelduck flighting and pair of Red Breasted Mergansers chasing each other in the harbour entrance. On 'new island' just north of the main channel a pair of Peregrine Falcons watching every move...seemingly unnoticed by hundreds of Grey Plovers and Dunlin feeding on the mud nearby. These are probably the pair that nest regularly on Chichester cathedral but I have not seen them on this, their favourite resting spot for a few weeks...they have probably been pre-occupied with their preparations for raising another brood this year.
Posted by Pagham Birder at 8:38 AM No comments:

SPRING IS IN THE AIR ? 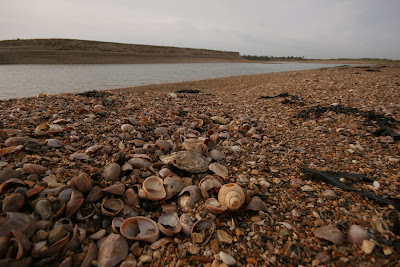 A warm, still morning created the sense that Spring can't be far away. The Skylarks were singing and even a pair of Ringed Plovers were engaged in display flights as they chased each other across the beach. Brent Geese and Wigeon are still present in large numbers but the Brents seem to be breaking up into smaller groups rather than they have been previously when feeding as a couple of big flocks. Dunnocks are in full song and Chaffinches and Blackbirds are beginning to air their lungs....yes, Spring must be on the way!!
Posted by Pagham Birder at 10:52 AM No comments: 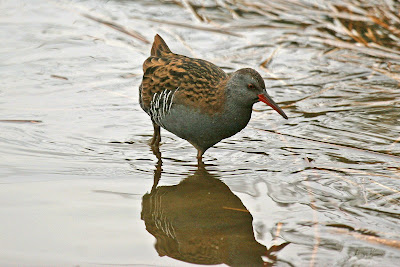 <
Yesterday was a day off from school for my 7 year old grandaughter and we spent the day together birdwatching. As we were feeding the ducks at the far end of Pagham Lagoon and as I was looking at the Tufted ducks and a drake Pochard she quietly announced that she was watching a Water rail! Not really believing she was seeing this very retiring bird or that she would even recognize one I turned and looked to where she pointed and sure enough there was a water Rail skulking in the reed bed! We waited a short time and as it ran nervously across a patch of water I was able to get a record shot of the bird before it was lost to site in the reeds. What a lucky siting and thank you Jasmine.
Posted by Pagham Birder at 10:22 AM No comments: 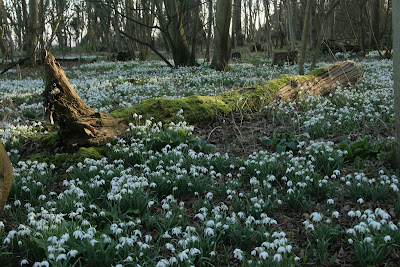 A four day visit to the Suffolk coast produced an amazing 89 species of birds. The highlight was undoubtedly the Great White Egret which had been in the area for a few weeks. We first met up with it at its roost site in trees surrounding The Meare at Thorpeness later seeing it on the Levels at Minsmere. A superb drake Smew showed well on East scrape at Minsmere together with a single Ruff and a Spotted Redshank and a Water Pipit was present in the adjacent 'Tarpan' field. The weather was cold, sunny and dry and the Snowdrops in Dunwich were beautiful...see above image.
Back at Pagham this morning the Mediterranen Gulls have become quite noisy and some are now in superb summer plumage although the majority are on the change from winter to summer and look a bit untidy! Four Goldeneye were present on the Lagoon accompanied by six Tufted Duck and two Little Grebes.
Posted by Pagham Birder at 11:44 AM No comments: