It was good to note both adult Peregrines and their 3 juveniles on and near  New Island this morning.

The summer 'resident' Brent Goose, Curlew, a single Whimbrel and a few Oystercatchers, Dunlin and Ringed Plovers were the only birds of note from the Spit hide (yet again reeking of beer with at least 60 discarded empty cans ++ )

More of the same!

Moths in the trap this morning  included;


Posted by Pagham Birder at 8:18 PM No comments:

A friend returns from Australasia.


Yesterday a friend who has been visiting relatives on the other side of the world touched down at Heathrow last night after a very long flight. This morning  a Black Swan had arrived overnight on Pagham Lagoon. What a strange coincidence.


I can't ever remember seeing a Black Swan on the Lagoon before...only from the North Wall or in the harbour.

Quiet on the bird front...

...but a good night for moths...here's one of many trapped overnight and released this morning. 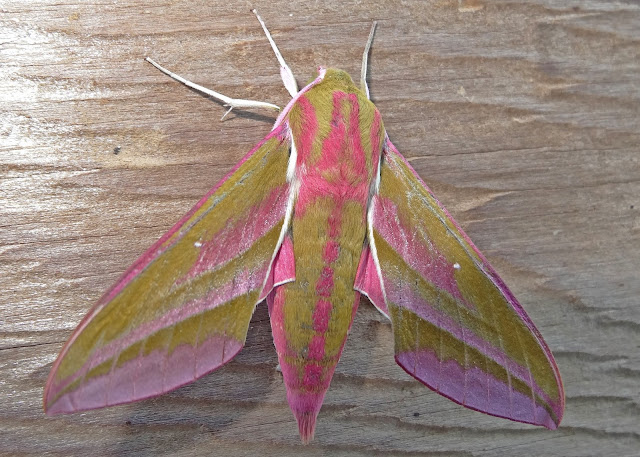 60 Oystercatchers flew into the harbour in a flock first thing this morning. Sand Martins and a few Swifts on the move during the morning.

Posted by Pagham Birder at 7:43 PM No comments:

Yesterday I mentioned the summer plumaged BT Godwits but as I didn't have my camera I returned this morning to capture this fine example....
Here are some of the others.... 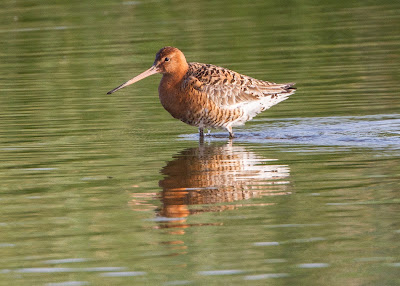 Posted by Pagham Birder at 7:14 PM No comments:

Back to Pagham from a quick continental break.

I have just returned from a 'non birding' holiday in Holland and Belgium and first thing this morning paid a visit to the North Wall. I was interested to note that Jim Western had reported  hearing/seeing a  Grasshopper Warbler but alas no sign of it this morning. As it happened I met Jim on a walk to Medmery, loaded with plenty of water....rather him than me on a day like today!
However, it was a superb morning and still quite cool when I arrived at 7.00am...Cettis and Reed Warblers were very vocal. A dozen Black Tailed Godwits were feeding in the pool, resplendent in summer plumage! A few were sporting rings. The only other waders I saw were 2 Dunlin...also in summer plumage and 10 or so Lapwings and two Redshanks. A Greenshank was calling in the harbour.

Back up to the Spit hide and the only birds of note were 22 Curlews.

In the garden a surprise....the Mallard had laid another 3 eggs in the alley way but the bird was nowhere to be seen. Like the 2 laid previously this year I suspect nothing will come of it and doubtless the eggs will disappear one night probably to a fox or rodent. 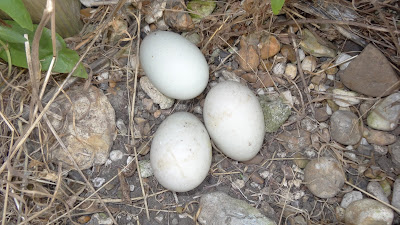 Incidentally, although not a birding holiday it is difficult not to note the various birdlife. It generally seemed very quiet but a lot of Black Redstarts were noted in both town (Verviers) and countryside (High Fens in Belgium); Buzzards common and just one Red Kite. In Maastricht whilst watching an outside concert the 'screaming' of hundreds of Swifts overhead was indeed memorable! On the way home two Common Crane were seen just west of Dunkerque.

Posted by Pagham Birder at 4:35 PM No comments:


Birdlife was minimal but a Spit walk  showed  'work in progress' on a number of fronts. The Environment agency continue drilling to the west of the lagoon..

Posted by Pagham Birder at 3:08 PM No comments:

At 9.00a.m.  this morning the beach was alive with Sand Martins. Scores were using the far end of the Church Norton Spit as a resting place and every so often they would all take off, feed over the water and then return to the pebble beach...at least 200+ 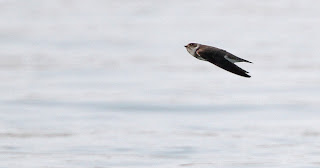 It wasn't too long before they were disturbed by fisherman and departed.
Posted by Pagham Birder at 10:28 AM No comments:

Little Ringed Plover on the Lagoon

On the beach at 7.00am, and on the shoreline a Whimbrel and a Common Sandpiper just outside the bungalow. A stroll up to the hide ... the Peregrine was in the usual spot on the saltmarsh and then, as I returned past the Lagoon, a Common Sandpiper called and flew along and landed almost in front of Laguna and was joined by a Little Ringed Plover.This is a first for me at this location but alas, it was soon disturbed by a dog walker and flew to the other side.
In view of this I thought the North Wall might be productive but the only waders were a Common Sandpiper and a fairly confiding Curlew. 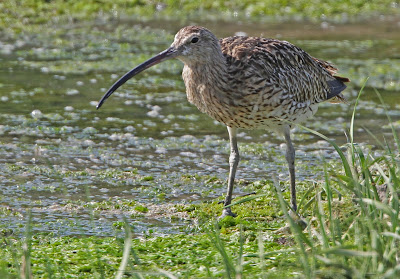 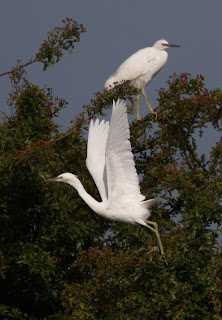 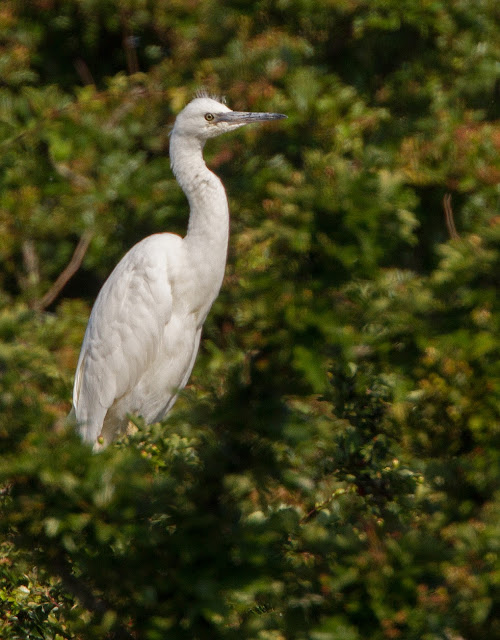 ....and a rather motley Heron appeared between the sluice gates as I left. 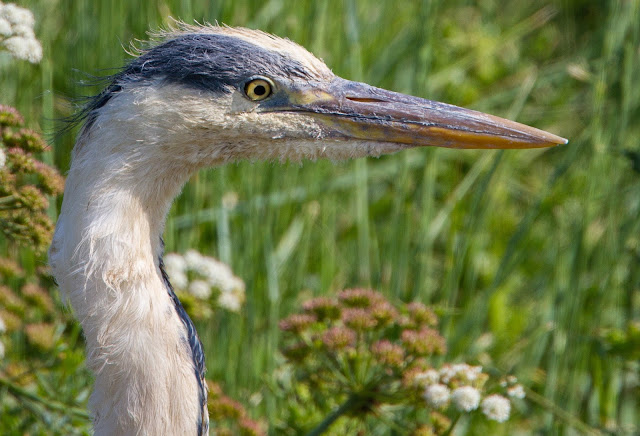 Posted by Pagham Birder at 2:14 PM No comments:

Out at 7.00am to check the harbour for the reported Spoonbill but apart from more Swifts over the lagoon and a hunting Peregrine there was little of interest and  no sign of the target bird.

However, early afternoon it was reported on the North Wall viewable from the sluice. So, armed with camera, I arrived at the Salt House and there, in the middle of the harbour a  pin prick of a sleeping creamy white bird which, with bins was the Spoonbill. Photographable?...well no!
.... here's the proof!
Having lugged the camera to the Breech Pool what could I photograph?

A Shelduck with four youngsters the other side of the pool...

and then I was reduced to Magpies! 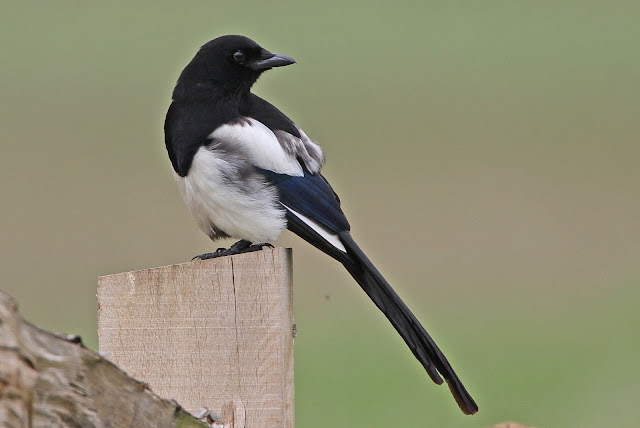 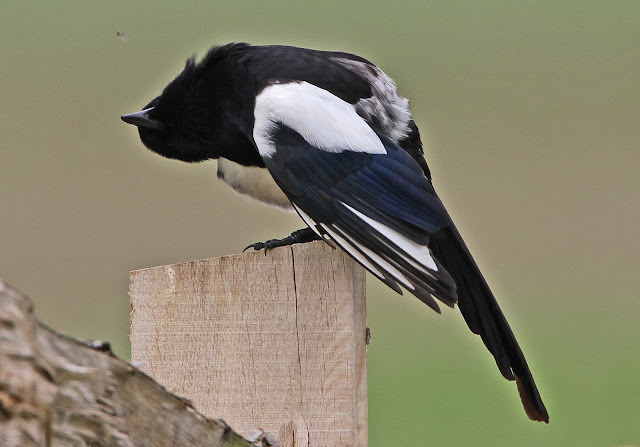 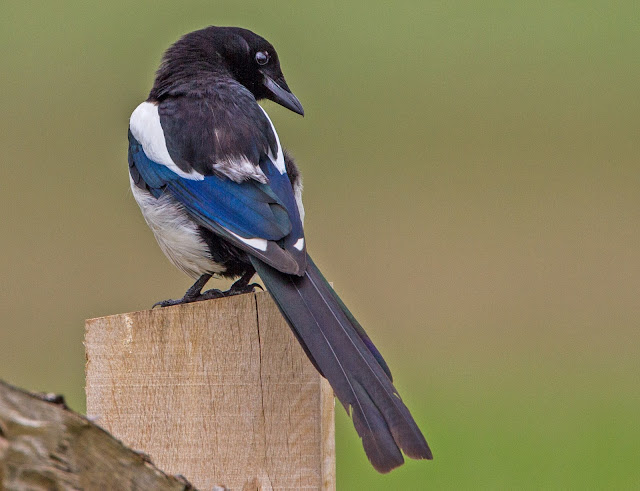 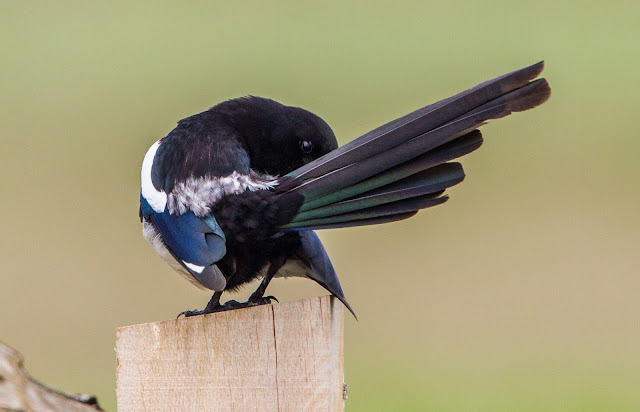 ...but hang on, if these were rare we would be bowled over by their plumage...just look at these tail colours and the general 'exotic' look of the bird.! Enjoy Magpies!

Posted by Pagham Birder at 7:03 PM No comments:

Scaup, still on the Lagoon.

An early morning visit to the North Wall... Cettis, Sedge and Reed Warblers very active and very vocal, a Turtle Dove purring in the Honer Farm trees and then two calling Avocets  flew in and started feeding on the mudflats just in front of me (no camera,of course! ).

Back to the Lagoon a little later (with Camera!)where the female  Scaup was still accompanying the Tufted Ducks..

The Childing Pinks were late in blooming this year and the one's I have found are much smaller than last year....presumably because of the late spring .If anyone wants to see a few,  check just below  the old No. 10 trail post just before the lone apple tree on the way to the Spit hide. 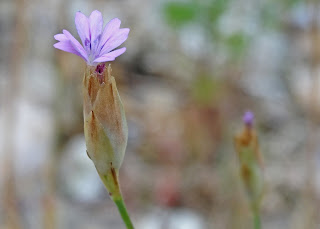 Posted by Pagham Birder at 3:06 PM No comments: