Posted by Pagham Birder at 1:57 PM No comments:

A brisk, cool, windy mornings walk around the Pagham Spit produced a Whimbrel in the Little Lagoon (for the third morning running), 2 Wheatears along the path, a Willow Warbler in the gorse, and, star of the show a Whinchat clinging on to a slim thorn branch and being battered by a force 6!...it looked pretty tired and was not too fussed about my close approach (no camera, of course! )
Posted by Pagham Birder at 12:11 PM No comments:

I missed the reported Osprey yesterday but was hoping it may have been hanging around somewhere in the harbour but alas...no sign. A walk along the North Wall produced good numbers of Redshank and Black tailed Godwit, a single Spotted Redshank, a few Wheatears and a single Whinchat.

A Whimbrel was splashing and preening in Breech Pool and numbers of Teal are increasing.
Coot numbers have increased on the Lagoon and Little Grebes seem to be static at 8 in total.
Have just returned from a week on the Isle of Wight and although not a birding week did visit the RSPB reserve at Brading when the highlight was a Hobby accompanying 3 Buzzards. 6 Common Sandpipers and a Greenshank were present  at the Hersey Reserve near Seaview. 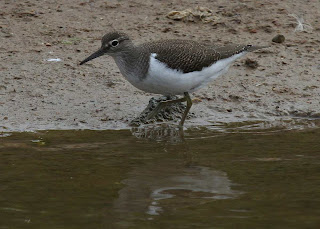 One of six Common Sands at Hersey 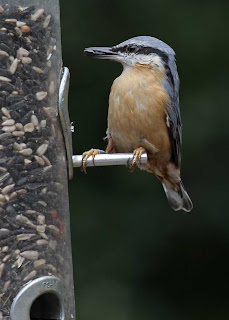 When returning, we visited  Blashford Lakes and watched a very active and obliging Nuthatch on the feeders...and got a decent photo!
Posted by Pagham Birder at 8:35 PM No comments:


Willow Warbler in a Blackberry bush 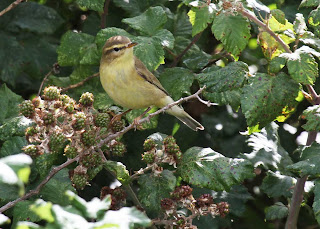 Whitethroats and Lesser Whitethroats were feeding avidly in the gorse with Wheatears throughout the beach and a single Whinchat near the Little Lagoon. There was a report of a Marsh Harrier and a Hobby but I missed both! Mediterranean Gulls are becoming more numerous and wader numbers are increasing...mainly Dunlins,Ringed Plovers and Turnstones.
A Seal had hauled itself up on a mudbank in the harbour,
Posted by Pagham Birder at 1:31 PM No comments: 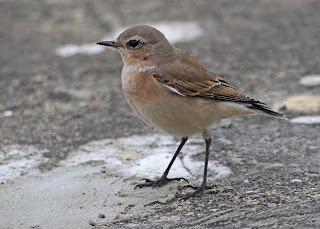 At 11.20am today the first returning Wheatear of autumn suddenly appeared on our patio and proceeded to eat ants just 10ft in front of the double glazed door....hence above image!

This morning there was a Willow Warbler and a Whitethroat in the bushes near the Lagoon so hopefully this is the start of some interesting sightings.
Posted by Pagham Birder at 12:15 PM 2 comments:

Having been watching a Ringed Plover on its nest for the past 10 days or so I was very upset to note that the nest had been trampled over the weekend. As far as I am aware despite several pairs attempting to nest on Pagham Spit none have been successful.

A public 'drop-in' had been organised locally by the West Sussex Council and the R.S.P.B. to gauge local reaction to the possible takeover of Pagham Harbour by the RSPB.
This could have have some distinct conservation advantages and it will be interesting to note developments...see http://www.westsussex.gov.uk/ccm/navigation/environment/the-west-sussex-countryside/the-coastal-plain/pagham-harbour-local-nature-reserve/

8 Little Grebes arrived overnight....6 on the Lagoon and 1 on the Little Lagoon.
Linnets are forming some decent sized flocks and foraging for seeds on the abundant Vipers Bugloss. (2 flocks of 20 and 30 birds)

Incidentally I caught a fish last week which I believe was
an Allis Shad and if confirmed would prove very unusual and a first for Pagham. Could anyone please confirm.It weighed in at 1lb 12oz.
Posted by Pagham Birder at 3:11 PM 1 comment: