As I looked out of the window on this bitterly cold frosty morning I was surprised to see a Sandwich Tern fishing just off shore and flying East towards the old Mulberry Harbour 'wreck.

It may be of interest to note that each morning a few hundred Brent Geese fly over our bungalow and head east presumably to feed off Climping...at about 4.45pm they return overhead to the harbour....noisily!
Posted by Pagham Birder at 9:54 AM No comments:

On the sea a single Slavonian Grebe. The shingle bank attracted a dozen or so Mediterranean Gulls and the
Goldeneye had transferred to the harbour from the Lagoon except there were now 6.
On my return to the bungalow I disturbed the resident Sparrow Hawk as it made off with either a Blackbird or Starling from my feeding station! Wretch!
Posted by Pagham Birder at 12:52 PM No comments:

Its getting colder here in Pagham Harbour

A cold frosty morning ...plenty of  waders and ducks. 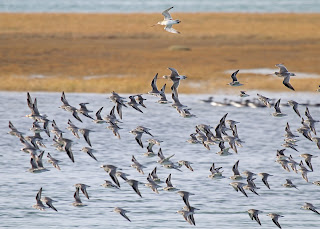 Knot flock accompanied by 3 Bar Tailed Godwits, which are much less common in Pagham than the usual Blackwits.
Posted by Pagham Birder at 1:33 PM No comments:

A Jewell of a Bird !

All the usual about this morning with the Peregrine in its usual spot on New Island and the Brent and Wigeon all floating into the harbour  with the the incoming tide....but this mornings highlight was this Kingfisher showing off its iridescent colours in the sunshine. 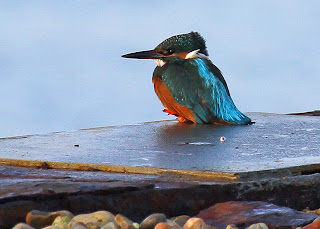 Posted by Pagham Birder at 10:27 AM No comments:

The Seashore this morning.

A pleasant but colder morning and as the tide was coming in at about 8.30am many gulls and waders were feeding along the weedy foreshore. The most interesting was a single Purple Sandpiper feeding alongside Turnstones, Redshank and Grey Plovers.
Most of the gulls were Mediterranean Gulls and as I approached they made off towards the shingle spit  like a cloud of large white snowflakes (I've gone all poetical this morning!....I'll stop now before I get carried away! )
Posted by Pagham Birder at 9:32 AM No comments:

A quiet,still winter morning...not a ripple on the Lagoon. The 5 Goldeneye still present ...all asleep except this drake.

Still some big wader flocks about  and as it was coming up to high tide a lot of movement as their feeding grounds gradually disappeared.

Posted by Pagham Birder at 4:12 PM No comments: 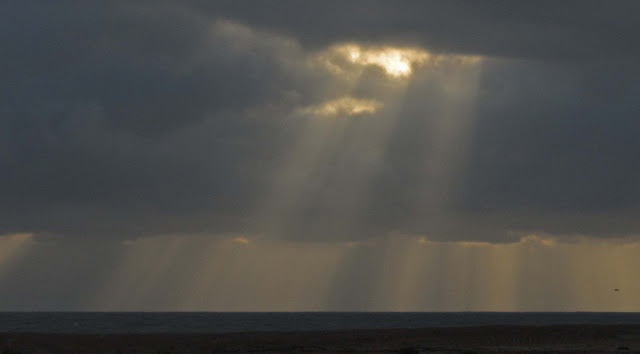 ...but plenty of birdlife, both in quantity and quality.
The image above shows just a portion of the c1000/1200 flock of Black -tailed Godwits wheeling in front of the spit hide...an amazing site and the chattering calls of a thousand plus birds just incredible.  Another flock of about 350 Knot on the shingle bank plus big flocks of Lapwing and Golden Plover plus smaller numbers of Grey Plover, Turnstone,Oystercatchers and a group of 9 Avocets swimming like ducks near the saltmarsh.

Duck numbers are still increasing with Wigeon in poll position but with good numbers of Teal, Pintail, Shoveler and a few Red Breasted Mergansers and now 5 Goldeneye on the Lagoon with Tufteds and 3 Pochard.

Later in the morning I visited the north wall and was pleasantly surprised to find a Black Brant with a small flock of Brents close enough to photograph with my p.a.s. compact.

Posted by Pagham Birder at 9:31 AM No comments:

Yesterday afternoon I noted a pair of distant odd looking Ruddy Shelducks but hoped for a better view early this morning. Alas no sign of them but 6 tired looking Greylag Geese hunkering down out of the wind in one of the nearby channels. Since early morning it has blowing a hooley with heavy rain...not birding weather!
On reflection I beieve these RuddyShelduck may have been escaped hybrids...anybody any ideas?  Regrettably too far away to photograph.
Posted by Pagham Birder at 3:43 PM No comments:

Avocets and a Kingfisher

Early morning in the Spit hide revealed 4 Avocets feeding in the middle of the harbour and late afternoon produced a Kingfisher squatting on the rusty metalwork overlooking the Little Lagoon.

Posted by Pagham Birder at 7:30 PM No comments:

I am always amazed at the regularity of some birds to turn up year after year in the same place on almost the same date ...certainly within 7/10days . The Short Eared Owl has been returning for several years to Pagham Spit and I was pleased to see that this year is no exception and as I made my way over the beach early this morning I unintentionally flushed the bird which then made its way north across the harbour
PS..Yesterday afternoon I found a late Wheatear near the Little Lagoon
Posted by Pagham Birder at 5:22 PM No comments:

In view of the attrocious weather of the past couple of days I having been thumbing through some of my images taken throughout the year and have a question mark hanging over this warbler photographed in the S'albufera reserve in Mallorca during the first week of October. It was feeding actively in the reedstems and initially I thought it was a Great Reed Warbler (imm) but having looked again I am not sure. Can somebody please help...many thanks. 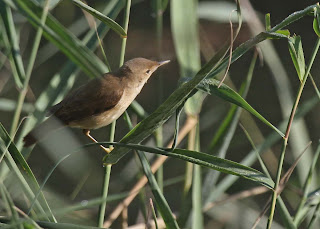 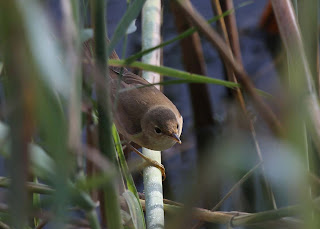 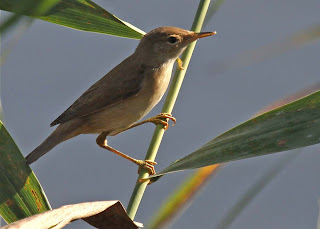 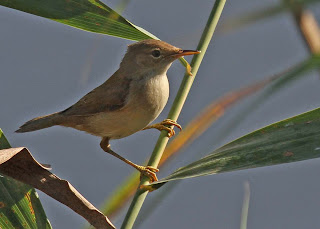 I did manage to get up to the harbour entrance to see that the work  was completed on the sea defences! I was told that it was a 'health and safety' precaution to prevent chilren putting their hands through the rusty holes. The chaps had been sent from Nottingham and spent 2weeks in a hotel to complete this mission!!! 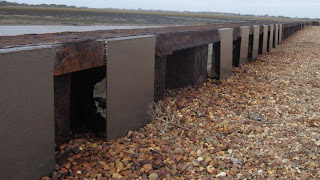 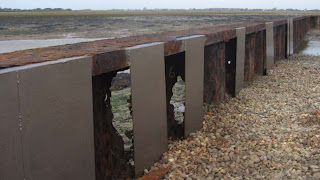 Purple Sandpiper on the beach

Yesterday there was a considerable movement of Brent Geese throughout the day, some coming into the harbour but many flying past towards the west. It continues today but there are less frequent 'flybys.'


The highlight today is a Purple Sandpiper foraging along the tideline at high tide...my first this Autumn. With patience I was able to approach to within 5 metres or so and got a few images...here are some..... 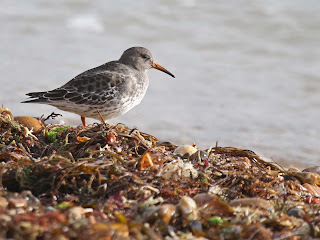 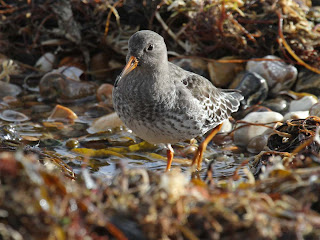 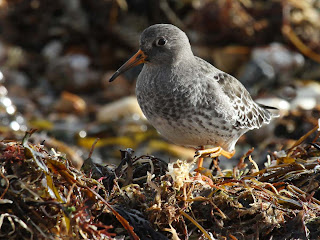 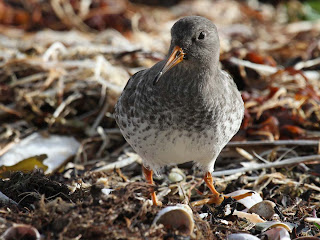 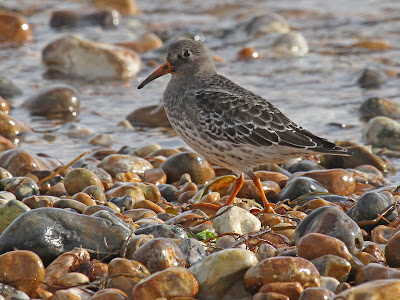 Posted by Pagham Birder at 3:40 PM No comments:

A Black Redstart was reported yesterday in the caravan site alongside the Lagoon but I had no success in tracking it down...I just hoped that this villain of the peace was not responsible....
Two drake Pochards were on the Lagoon yesterday but they too, seemed to have disappeared. A Water Rail was calling in the reedbed at the far end of the Lagoon and there was no shortage of Little Grebes. 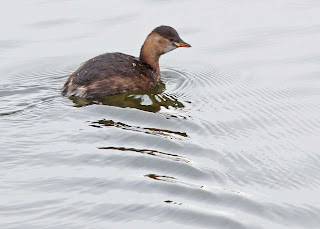 Time was short today so I headed  home quickly but noticed a Knot flock of about 250 birds  wheeling over the shingle bank and 13 Goldfinches were on the niger seed feeder.
Posted by Pagham Birder at 6:56 PM No comments:

An early visit to the spit hide revealed no movement of wood pigeons today but a splendid HenHarrier....ringtail, flew across the harbour putting up waders and gulls!
A visit to the North Wall later produced a flock of approx 220 Golden Plover, Grey Wagtail and a very vocal  Cettis Warbler... yet despite this I still couldn't see it!
A few of this morning pics!


Posted by Pagham Birder at 8:37 AM No comments:

2 late Swallows flew along the beach westwards at 8.30 this morning...will these be my last?

A Seal in the harbour.
Posted by Pagham Birder at 6:57 PM No comments:

It was a damp and dreary start to the day but nevertheless several hundred Wood Pigeons were moving west.
It is not unusual to see thousands, if not tens of thousands of pigeons moving west during early November days and I suspect a lot more will be on the move .
Work started last week repairing the sea wall at the harbour entrance but I am not at all certain that the repair job will work.
Surely this can be improved upon!!!

Posted by Pagham Birder at 7:41 PM No comments: