Nothing exciting but we have never had a Reed Bunting in the garden before. Besides that, there were 2 Chiifchaffs in our one and only tree and although a dull and dreary morning, I  thought these visitors were  a sign of a good morning with migrants in every bush!

How wrong can you be!!

A single Wheatear, 2 Robins and about 6 house Martins overhead.

I took the camera just in case and jacked up the ISA to 800 and felt obligated to take a few shots so here they are....


Posted by Pagham Birder at 3:36 PM No comments:

Just back from a week in North Norfolk and an early morning walk to theSpit hide felt decidedly Autumnal...a big drop in temperature overnight and a brisk north easterly! A Chiffchaff and a Wheatear were present along the pathway and my first Stonechat for some while hopping from post to post.
When we returned late afternoon yesterday there were a good 50 House Martins flying low over the beach heading East.

Norfolk was interesting but we dipped out on the Arctic Warbler (present up to the day we arrived in Holme and an elusive  Barred Warbler). However a visit to Cley produced a few close ups of Bearded Tits...always a spectacular bird to see! 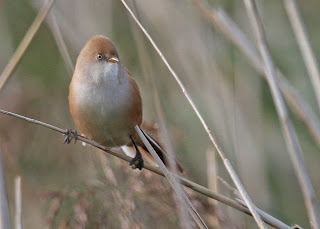 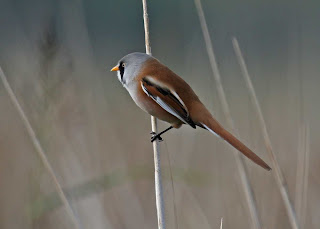 The Dartford Warbler is still here

A windless morning tempted me out at 7.15am to see if the Dartford Warbler was still around as yesterday was exceptionally windy and it would have kept its head down
.


A Little  Egret flew up  and the early morning sun showed  its bright yellow feet briliantly!

Posted by Pagham Birder at 8:42 PM No comments:

A good selectiuon of species this morning! 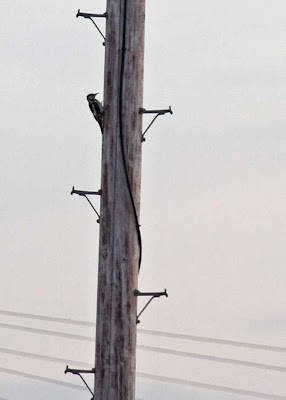 As I started my early morning sortie I was alerted by the call of a Great Spotted Woodpecker and there it was on the telegraph pole outside the  bungalow...there are no trees on the spit so I suppose this was next best!

A kingfisher was present on the Lagoon (although too far away for a photo) and Chiffchaffs were darting in and out of the bushes
. 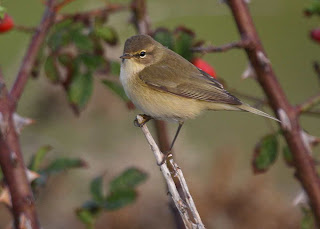 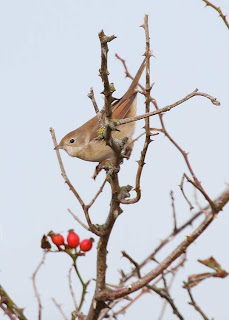 ... whilst  a single Whitethroat permitted a close approach

Not a bad hour for a few new images.
Posted by Pagham Birder at 10:28 AM No comments:

A bright sunny morning lured me out early to the North Wall. The Curlew Sands still feeding with a few Dunlin, then a flock of Lapwing and Black Tailed Godwits took to the sky as a superb Hobby flew over Breach Pool. Next was a female Garganey that came in from the harbour and mingled with the Teal before going to sleep.
..and then news came that the Wryneck was 'showing well' and soon I found it thanks to Peter Callis on the lower path...and managed some reasonable images. 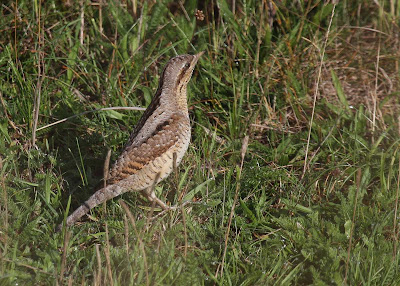 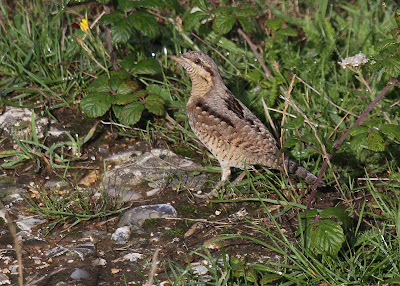 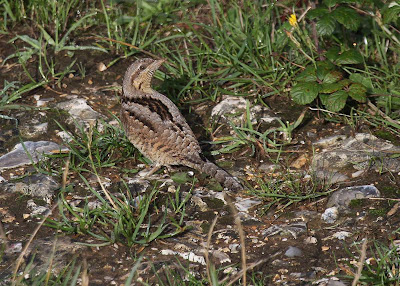 I was told there was a Black Necked Grebe on the Lagoon and a Wryneck at the North Wall so had to decide my priority, and, as I was short of time I headed to the North
Wall and after a little searching managed to locate the Wryneck. It was in a hawthorn bush and a Robin dive bombed it and made it fairly obvious when it retreated further along and deep into another bush.It showed well a couple of times and then decided to disappear....so no photographs!

A tinge of excitement!

As I made my way to the hide this morning at 7.45am I suddenly became aware of a small bird at the foot of a gorse bush. It disappeared and then I heard a very short 'churrrr' and suddenly there it was ...a Dartford Warbler scuttling about well inside the bush. I grabbed the camera, took a couple of hasty shots and then the dreaded message appeared on the screen 'card full'. Immediately panic took over and I fumbled for another card which I also hadn't deleted and that too was full. By the time I had sorted myself out the bird was on top of the bush and I grabbed 2 shots before it disappeared...and I did'nt see it again!

A couple of Yellow Wagtails flew west and one of them settled very briefly on the shingle. Several have been passing over during last week and early this.

Posted by Pagham Birder at 12:01 PM No comments:

An distinctly 'autumny' feel this morning.

Another morning for Hirundines....exclusively Sand Martins over the beach moving west in a constant stream for a couple of hours, but later, when visiting North Wall a few House Martins and an even smaller number of Swallows. Little else unusual to report. The Whimbrel remains on the Little Lagoon, Coot numbers have built up on the main Lagoon and a few Wigeon and Pintail are arriving in the harbour..but staying very much in the middle! Oh yes...several Yellow Wagtails flying west...always easier to hear than to see!


Posted by Pagham Birder at 5:16 PM No comments: