Another glorious morning on Pagham Spit!

Not too many birds about but plenty of wild flowers...here's a taster! 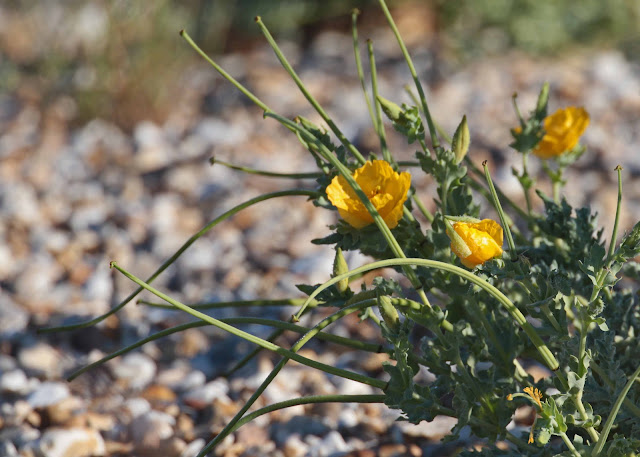 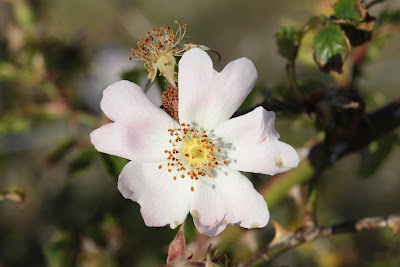 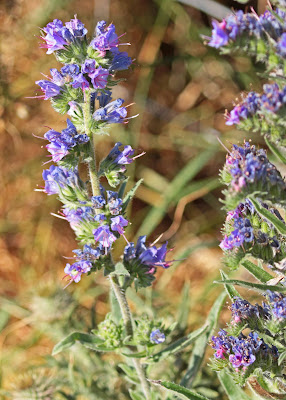 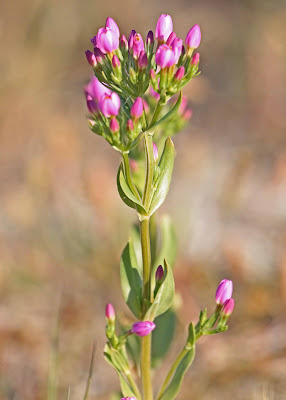 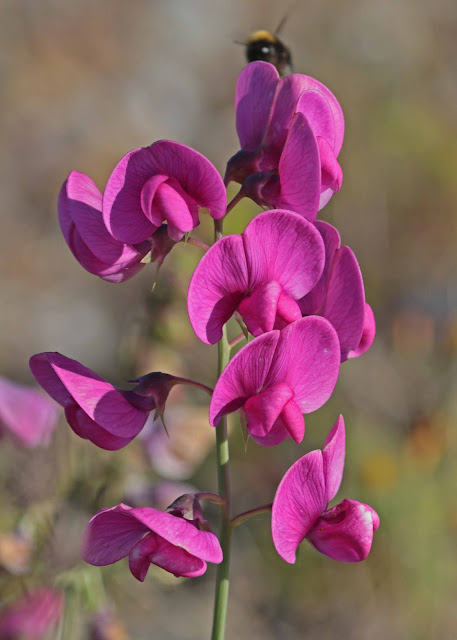 As for birds, the Little Terns were busy feeding young on the opposite spit...at least 20 or so birds in the air. 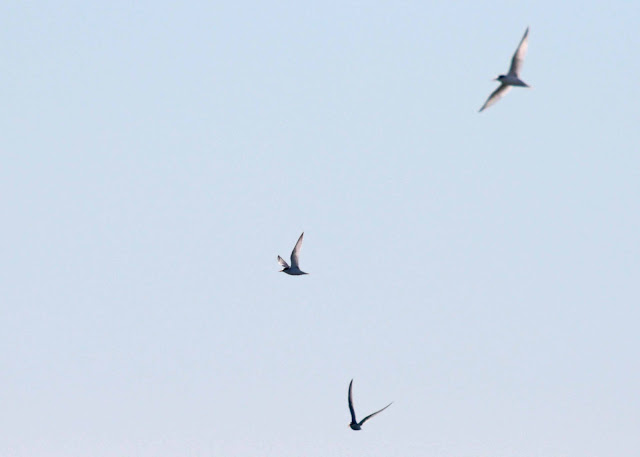 Linnets were few and far between and I only noted four  birds this morning. 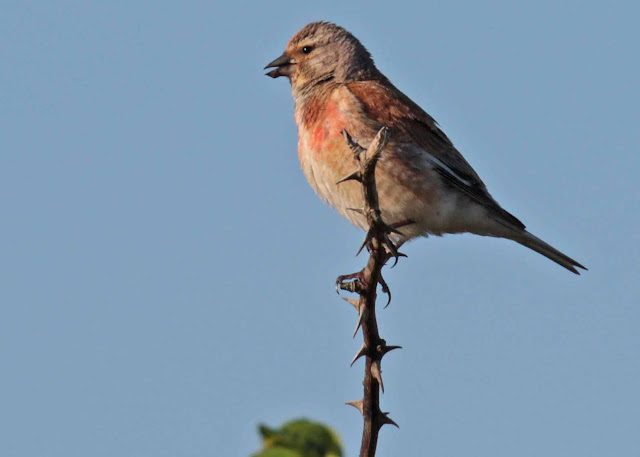 ...but the the Skylarks were in good voice..

I guess the Hudsonian Curlew is still present as there were a group of twitchers on the Church Norton side... 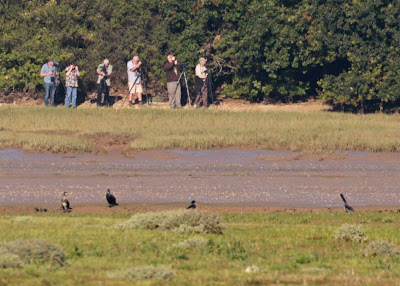 The forecast is for a very hot few days! Summer is here!

During my evening walk  the Great Crested Grebe was sitting on its nest on the Lagoon...hopefully it will be successful. A Carrion Crow was watching close by. 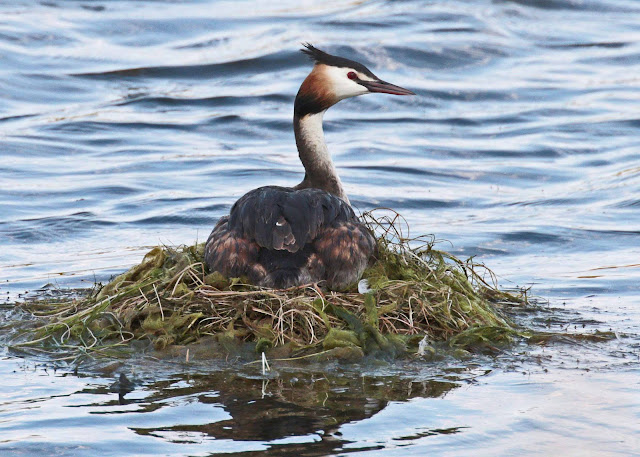 Evening sunlight makes a real difference...just look at this Greenfinch on a telephonr wire....
The Cuckoo is still lurking but I am still waiting to get a decent photo...it usually spots me before I spot it!
Along the shore line the Ringed Plovers and their youngsters were feeding..another great subject in these lighting conditions.


Another hot day tomorrow!
Posted by Pagham Birder at 10:46 AM No comments:

It was one of those rare 'perfect' mornings when the sun was warm and the air was still and not a soul was about. Curlews called,  a Skylark was singing aloft and a few Swifts were flycatching over the beach...magic!


Ringed Plovers seem to be doing well this year with three pairs nesting and two of the pairs with at least two youngsters each. This morning the parents were very anxious as I walked along the beach...
A pair of Oystercatchers were eyeing me and showed all the signs of having a nest nearby....I will have to observe from afar as they are very nervous birds  when breeding.

Time was short and I had a busy 'domestic' day ahead. Hey ho!

Posted by Pagham Birder at 7:47 PM No comments:

After a rough crossing from Islay to the mainland we headed  to Tayinloan for the 20 minute, very rough crossing to Gigha, on a small car ferry.
The Isle of Gigha is a small island (7 miles long by 1.5 miles wide) off the west coast of Kintyre and was subject  to a community buyout in 2004. There is one small but very comfortable hotel.

This was our third visit and whilst there are no particularly notable species present it is very quiet and unspoilt with just one road....ideal!

I suppose the star of the island for us was the Hen Harrier altough we only saw two ringtails and both were distant. 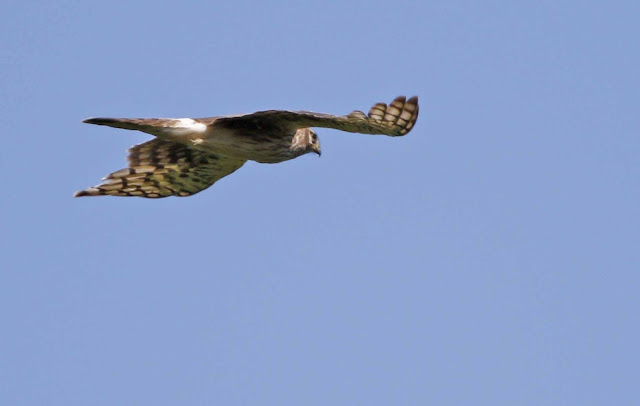 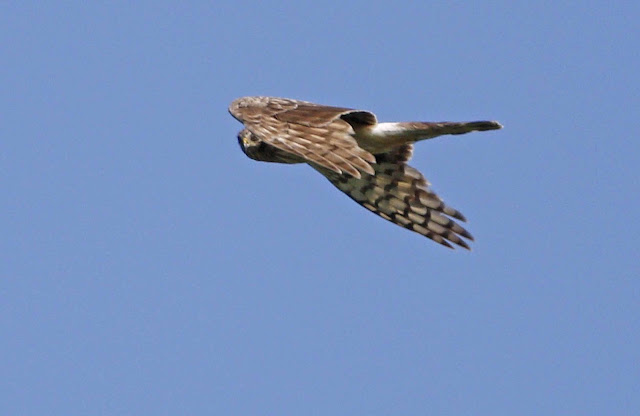 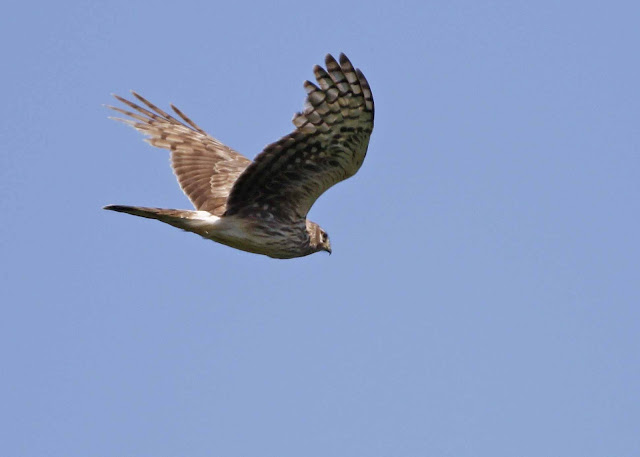 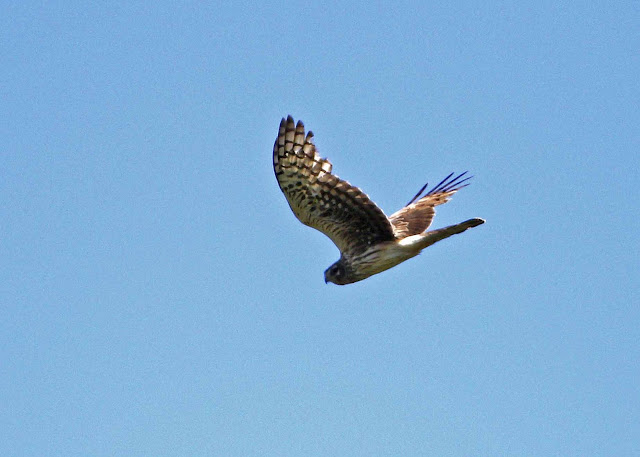 Well that's it for another year...apart from the weather, an enjoyable experience.

Back to Pagham now, where the sun always shines!
Posted by Pagham Birder at 3:19 PM No comments:

We arrived at Kennacraig Ferry Terminal in good time for the crossing to Islay on the M.V. Finlaggan. I had hoped to photograph Black Guillemots as I had missed them in Oban but there were only  a couple perched way out  in the distance.. 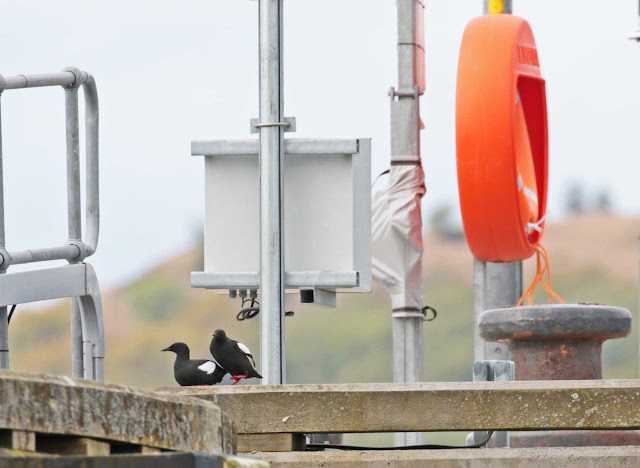 and a single bird flying the wrong way! 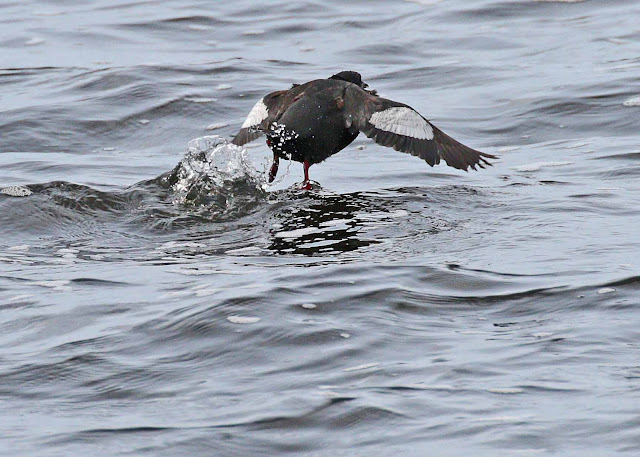 An Osprey circled the terminal whilst we were waiting and hovered several times but without success. 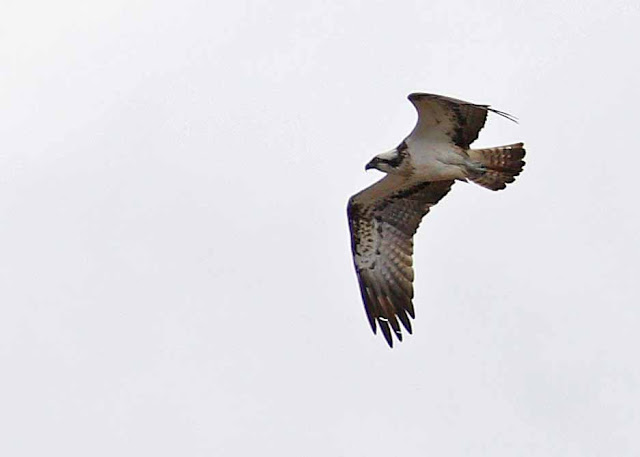 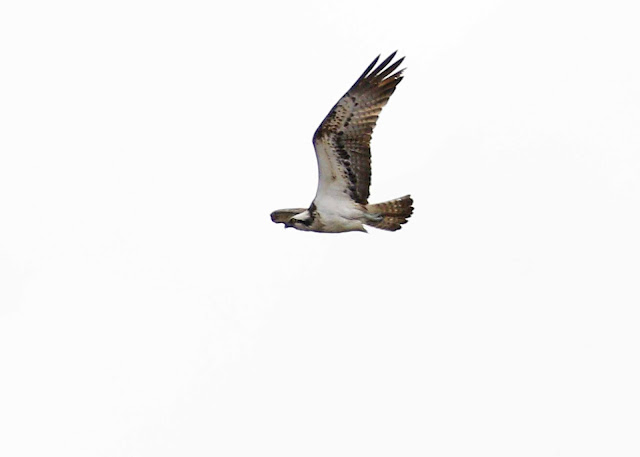 We have been to Islay twelve times previously during the past 30 years or so had always chosen the same time of year as it has  proved to be best for weather and for lack of mossies! This year was different in one respect.....rain every day! There were a few bright patches on some days and then we seized the opportunity to get out and about.

The RSPB Reserve at Loch Gruinart has a good hide and was a useful retreat in the wet! 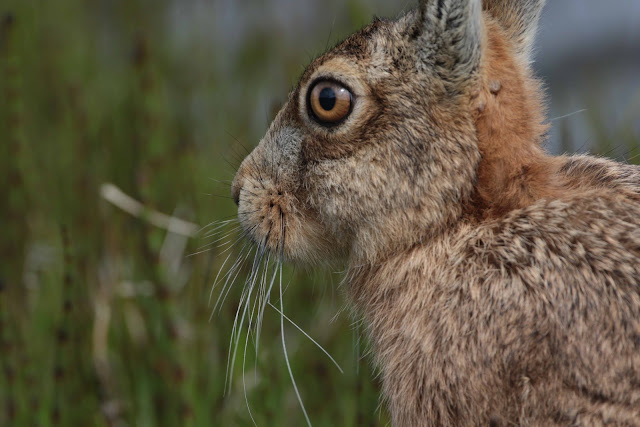 ...and a Hare almost came into the hide! 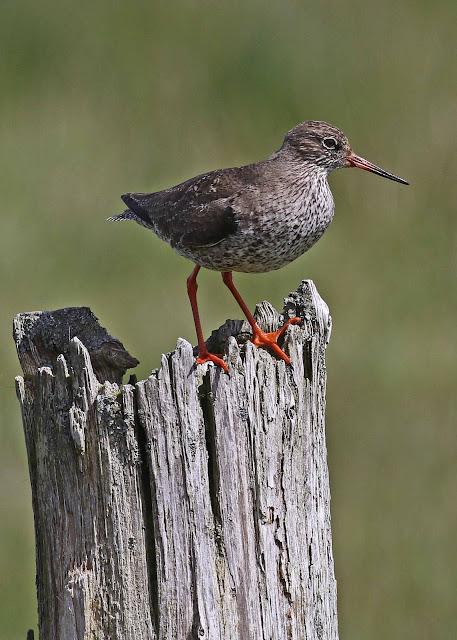 Numerous Redshanks were breeding and one particular stump in front of the hide proved popular, so when the sun emerged briefly, it provided a good photo opportunity.

Other birds around the island were duly photographed... 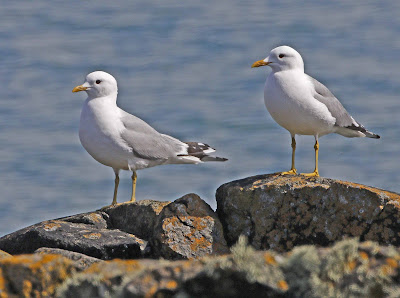 The highlight on the island is the Chough and on our last afternoon the sun shone and we were able to obtain a few flight photos of this  beautiful corvid... 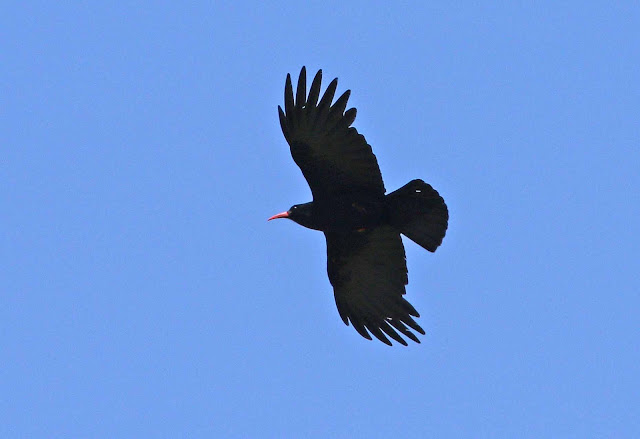 ...but a sunny evening on the very last day


To be concluded.
Posted by Pagham Birder at 9:28 AM No comments: