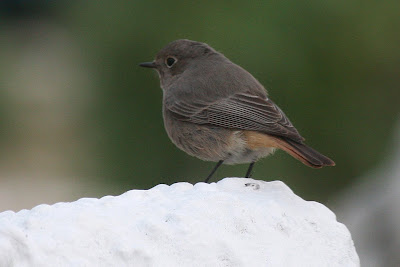 I was only saying to a visiting birder yesterday that I was hoping to see my first Black Redstart soon and sure enough one turned up today in the garden! It was on the beach initially, then flew to the front garden and when I looked out it was actually on a hanging basket only .5 metre away!! I managed to grab the camera and got a few shots through the double glazed window in poor lighting conditions. Never mind the image above isn't brilliant but at least it is a record shot!
Yesterday, there was a late Wheatear on the beach but most impressive were the numbers of Pintail which have increased dramatically during the past few days.Wigeon, Teal and Brent Geese have increased too.
Life has been a bit hectic recently hence blogs have been few and far between but hopefully by the middle of next week more time can be spent 'in the field'....or should I say on the beach!
Posted by Pagham Birder at 2:47 PM No comments: 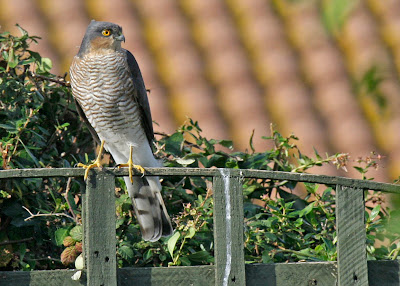 >A menacing Sparrow Hawk has returned to the garden and is seen regularly waiting near the bird feeders!
Small parties of Brent Geese have been arriving during the past weekend but numbers are much lower than this time last year. A few swallows continue to fly East daily but numbers are dropping and I doubt that we shall see many more...a few stragglers perhaps.
Posted by Pagham Birder at 2:00 PM 1 comment: 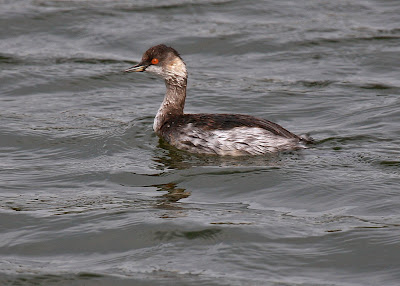 A Black Necked Grebe arrived on the Lagoon a couple of weeks ago and is still accompanying Little Grebes and Mallards at the far end of the lake near the board walk. It certainly seems a lot more tolerant of people than I'd expect.
Apart from this, a couple of Wheatears were still on the beach and numbers of Wigeon have increased during the windy weather of the past weekend. 7 Brent Geese flew west past the harbour entrance but I could not actually see any on the mudflats. Grey Plovers were much in evidence (some still in summer plumage) but apart from several parties of Dunlin, Ringed Plover and Curlew not too many other waders were about.
3 Swallows flew west.
Posted by Pagham Birder at 2:46 PM No comments: