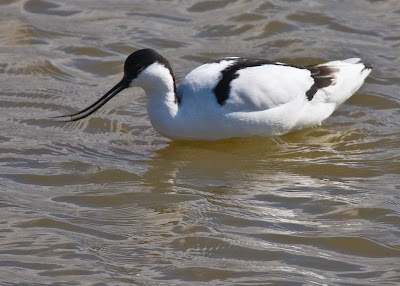 A week in wet , windy and cold Suffolk produced very little out of the ordinary birdwise. I spent one afternoon searching for elusive (non existent!) Penduline Tits on dingle marshes without success. My first Swallow of the summer was seen in Thorpeness last Thursday 26th March but apart from the usual species encountered at Minsmere nothing very exciting to report. On returning to Pagham yesterday afternoon 4 Whimbrel flew over the bungalow and later another 3 came in off the sea. Its good to be back!
Posted by Pagham Birder at 8:32 AM No comments: Links to this post

Living on the beach does have its rewards but it can be restrictive as to the range of species seen on a daily basis. Today we had a visit from a cock Pheasant!

Two Purple Sandpipers on the Little Lagoon this morning.

The weather is changing dramatically today and the clouds have gathered and the wind is blowing and getting stronger by the hour...where has that glorious weather of last week gone!
Posted by Pagham Birder at 2:43 PM No comments: Links to this post

WHERE ARE THE BRENTS?

Only 12 Brent Geese in the harbour this morning...have they gone home?

2 Avocets in harbour.
Posted by Pagham Birder at 8:14 PM No comments: Links to this post 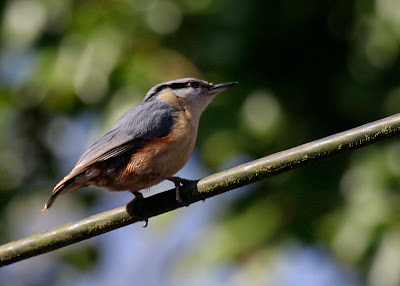 Yesterday in the harbour the Black Brant was feeding in front of the hide and a Purple Sandpiper was initialy accompanying the Turnstones on the Little Lagoon before later flying to the beach.

Today, after viewing a long stay Scaup on Drayton Pit south of Chichester I returned to the North Wall to look for 3 reported Garganey. I found a superb male bird feeding with the Teal on the Breech Pool and learnt that I had just missed a Swallow!

The weather is superb...if only it could stay like this for the next three months!

Oh yes, and I dropped into the 'secret' Hawfinch location on my return from Worthing this morning and had a fleeting view of a male bird and managed to photograph a Nuthatch.
Posted by Pagham Birder at 2:35 PM No comments: Links to this post

Yesterday I went to see the Red Kites just north of Goodwood and was rewarded with 5 birds. They were a bit distant for any decent photos but I managed a few 'record' shots.
Today started well with a good view of the Black Brant from the Spit hide. This bird has been reported throughout the winter and in fact there have probably been 2 birds for most of the time but I have not seem them together. Brent numbers are much reduced now and I suspect they will have almost all gone by the end of the month. A single Wheatear showed up in front of our bungalow this morning but wasn't seen again later..so probably it moved on quickly. A Little Egret came in off the sea and hopefully more will follow soon...for the past few weeks there has only been the odd one or two present in the harbour. A local birdwatcher let me know he had seen 2 Sand Martins over the lagoon during the morning.
I popped into Arundel again today to check on the Hawfinch situation and could only find one female...but they are still about which is good news.
A walk to The Burgh at Burpham produced a couple of singing Chiffchaffs but little else of interest but I did succeed in getting a reasonable photo of a stoat.
Posted by Pagham Birder at 8:14 PM No comments: Links to this post

....5 superb Wheatears on the shingle near the harbour spit hide. Fresh spring plumage and looking stunning in the bright morning sun.
Wonderful!
Posted by Pagham Birder at 10:48 AM No comments: Links to this post

Nothing in particular...but still pleasant!

An early morning walk produced nothing particularly noteworthy except that more dog walkers seem to be ignoring the request to keep their hounds on a lead. It worries me more at this time of year when some of the ground nesting birds are starting to stake out their territories.
I watched 2 Skylarks climb into the sky singing all the while as they ascended to probably 3-400feet and then parachute down,circling slowly at first and then,for the last 20 or 30feet or so, plummet rapidly to the spot they'd left 5 minutes earlier.
On the lagoon there are still a pair of Red Breasted Mergansers, a drake Goldeneye with 2 females and about 14 Tufted ducks.
Later in the morning I wandered round to the North Wall and was rewarded with a single Avocet and albino Curlew...a first for me! Grey Plover and Knot had formed a good size flock and many of the Black Tailed Godwits are moulting into summer plumage.
A large flock of Linnets still searching the seed heads in Slipe Field....a Serin was apparently with them earlier in the week but alas,I had no joy!
A Wheatear was reported from Selsey Bill this morning but as yet, I haven't seen one on the beach....and its not for the want of looking!
Posted by Pagham Birder at 4:49 PM No comments: Links to this post

A very cold morning with little birdlife to report. I was hoping to catch up with an unusually large gathering of 14 Red Breasted Mergansers which were present late yesterday afternoon...but alas they too had disappeared.
Posted by Pagham Birder at 8:53 PM 2 comments: Links to this post 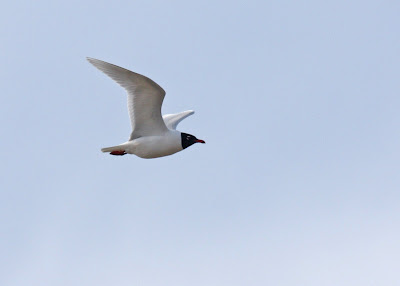 The Mediterranean Gulls are now sporting their summer plumage and have become quite noisy recently. 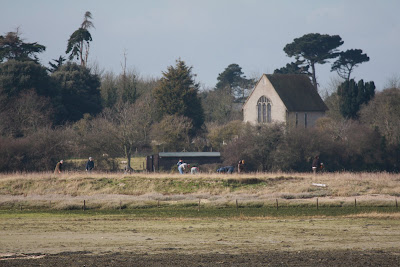 A working party was clearing Tern Island in the harbour this morning in preparation for the return of both Common and Little Terns hopefully in the next few weeks.

This mornings highlight was the appearance of a Short Eared Owl over the sea being mobbed by a carrion Crow and chased by the local gulls. All the waders that were feeding along the shingle bar suddenly took flight and for a few minutes confusion reigned before the owl drifted back towards Bognor.

Yesterday afternoon I received a telephone call from local birder, Tim Edwards who told me there was an unusual gull in the harbour entrance. By the time I had got there, the gull had flown to the far end of the harbour so ID was difficult but we decided that it was a second winter Glaucous Gull
Posted by Pagham Birder at 11:31 AM No comments: Links to this post