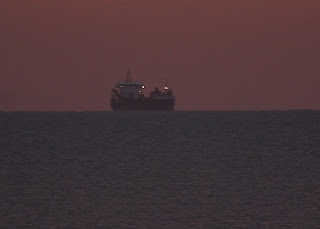 The Sand Fulmar was moored off the bay for a second morning but later departed east up the channel.
I don't know what the dredger  was doing but we certainly need some more shingle on our beach as the last week has seen another couple of metres washed away as the sea eases its way towards our boundary. The authorities tell us that it is monitoring the situation and all will be well....they don't live here or experience the worry and  concerns of the anxious residents.

It is always good to be up and about to see the sun rise and winter time makes it relatively easy to witness this. Here is this mornings spectacle....

..time to get out to see whats around...so its along the beach and up to the spit hide. Hundreds of feeding Brent Geese with a few Red Breasted Mergansers, dozens of Wigeon and then...a dazzling blue flash...a Kingfisher flies past and settles on the harbour wall...fantastic and well worth the effort of getting out early.
Later in the morning a visit to the North wal and another Kingfisher by the sluice gate plus all the usual waders and ducks.

...and that just about wraps up another year...so from Pagham Birder (well wrapped up by his grandchildren over Christmas)

A last look before Christmas Day.


...and a Very Happy Christmas to all my followers!! 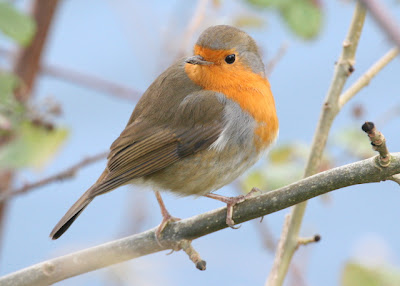 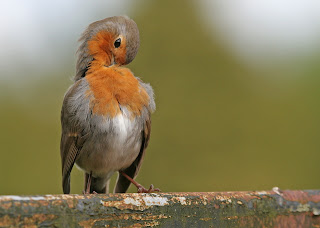 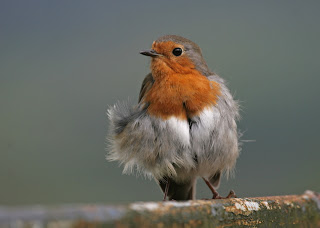 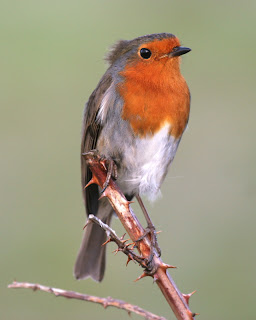 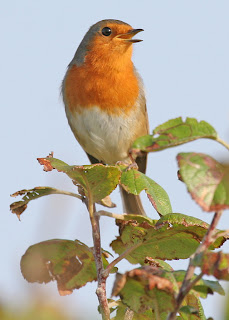 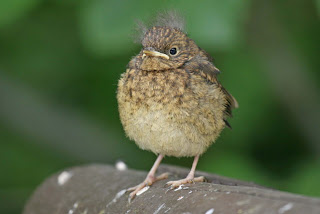 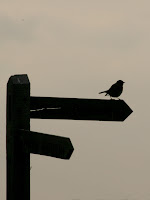 Posted by Pagham Birder at 5:29 PM No comments:

A very cold and frosty morning but quite still. A stroll up to the harbour mouth gave me a quick sighting of a Kingfisher as it sped towards me but then  suddenly veered away as it spotted me. On the harbour wall a Rock Pipit was feeding for minute insects and a female Peregrine was at her usual spot on a plank of wood on New Island.
In the distance several flocks of Lapwing and a sizeable flock of Knot.

...and then the characteristic creaking wing joints of a pair of Goldeneye as they flew into the harbour. 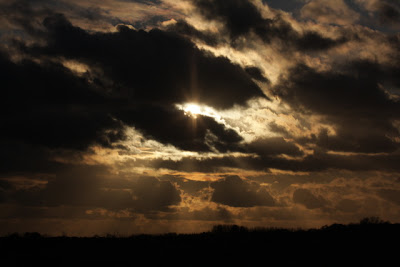 Posted by Pagham Birder at 6:12 PM No comments:

A few days holiday in Suffolk afforded a couple of visits to Minsmere but birding was quiet.  The RSPB is currently in in a state of organised chaos with new buildings and extensions creating havoc in the reception area  and sea defence work being carried out by the Environment Agency putting the North Wall out of bounds and making access to the beach difficult.

A visit to the newly erected  Island Mere hide was greeted with surprise as the srtucture is now anything but a 'hide'. My opinion is that the birds have got betters views than ever of the humans attempting to get a glimpse of them...give me the old fashioned wooden flaps any day rather than the all glass 'conservatory' look! 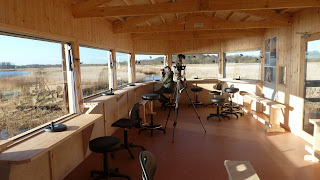 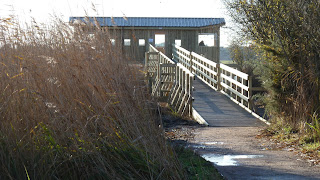 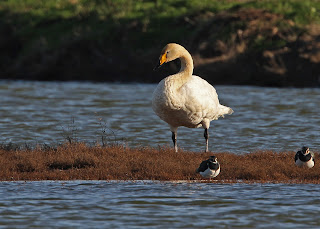 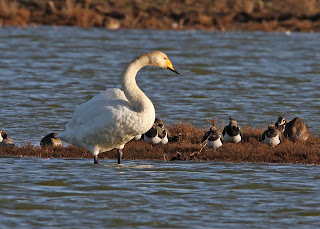 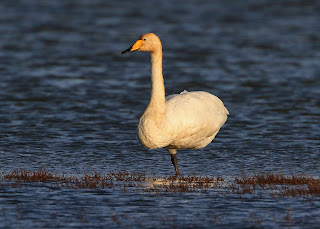 Elsewhere on the reserve birding was quiet and even this Green Woodpecker was hiding! 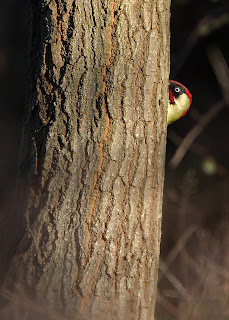 A
A late afternoon visit to the nearby North Warren reserve was rewarded with a murmuration of starlings going to roost and 5 Marsh Harriers but the light was just not sufficient to get a photograph of the harriers. 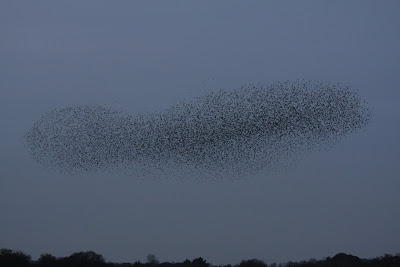 Posted by Pagham Birder at 5:07 PM No comments:

..another week goes by

....but there's not a lot to report from Pagham Spit.
Red Breasted Mergansers are increasing and the female Goosander is still around. After the winds on Friday 4 Gadwall arrived in front of the Spit hide...unusual for the harbour. Off shore a first winter Eider and several Slavonian Grebes together with several Great Crested Grebes. Huge numbers of Lapwings in the harbour accompanied by Golden Plovers plus all the usual wintering waders.
A trip out to Waltham Brooks produced a couple of Short Eared Owls. 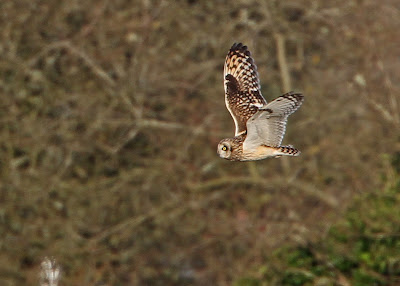 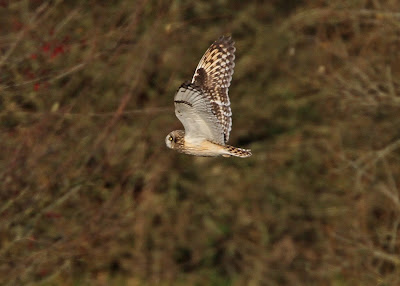 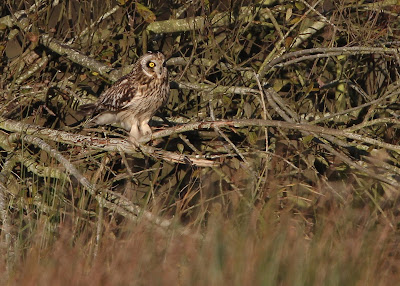 A Great Spotted Woodpecker was drumming somewhat unseasonally and a visit to The Burgh at Burpham at last produced the Rough Legged Buzzard for me (third time lucky)...unfortunately too far away for a photo. At least 6 other Common Buzzards, Red Kite and Kestrel were present but I left too soon to see the close up view of a Merlin which arrived very shortly after  I had moved on. ...usual story!

Posted by Pagham Birder at 7:02 PM No comments:

A week of dipping out!

Looking back at the week it has not been a successful one for finding the 'searched for ' birds.

On Wednesday, the day of the national strike, I took my grandaughter to Pulborough Brooks to see some specials to add to her list. We arrived just as the heavens opened so parked the car and watched for a while and saw Bullfinches, Dunnocks, Blackbirds, Blue and Great Tits bathing in a puddle that increased in size as we waited for the rain to ease.  Best of all for her was the Song Thrush......... 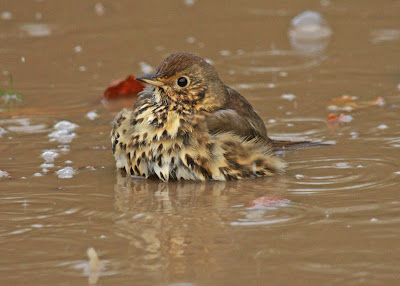 Once the weather cleared, we searched in vain for the reported  Firecrest, White Fronted Geese and the Peregrine in the 'usual' tree...not today though! No Firecrest but we made 'do' with a Goldcrest! 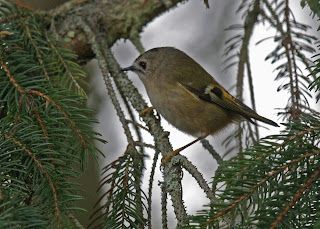 On returning home I got a message that local birder Bob Coyne had seen a Laysan Duck a couple of hundred metres away on Pagham Lagoon. Not your usual duck and unlikely to have flown from a Hawaii  but nevertheless interesting to see. I circumnavigated the Lagoon a couple of times during the next few days but drew a blank. A number of Pochards (15) and 4 Goldeneye plus all the usual but no Laysan Duck!

Oh well, Friday dawned sunny and bright so a second visit to  Burpham was a 'must' to get the Rough Legged Buzzard (my grandson refers to it as a 3 Legged Buzzard! ). After a 4.5 mile tramp up to The Burgh, the 'dew pond' and beyond with all the heavy camera equipment  there was no sign! Of interest was the fact that both Corn Buntings and Song Thrushes  were heard singing...and its December!

My only photos.... a Reed Bunting 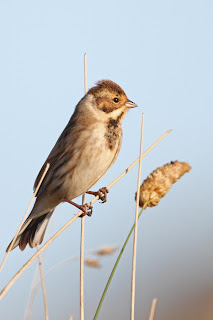 and a departing Kestrel in a hurry! 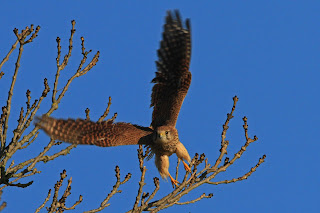 Hey ho...thats birding for you!
Posted by Pagham Birder at 10:03 AM No comments: