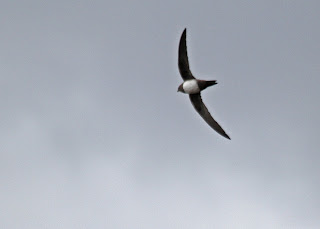 Alpine Swift....Kessingland
Have just returned from a week in Suffolk. It started with a Black Brant at Aldeburgh, Black Redstarts at Thorpeness and the usual selection at Minsmere with Jack Snipe, Ruff, Tawny Owl, Avocets, Bearded Tits and Marsh Harriers and then during the weekend, Palid Swift and Alpine Swift at Kessingland with supporting cast of White Wagtails and Firecrest .
The report of a mega tick on Westleton Heath had us scurrying to see the reported Lesser Kestrel and although distant good 'scope views were obtained by all ...see image below of the birders but regretfully no image of the distant bird.

Alas we 'dipped out'on the Penduline Tits at Minsmere that were present for a day or so prior to our arrival and again as we journeyed homewards yesterday morning!! A Great Grey Shrike had also joined the Kestrel on Westleton Heath!

I did manage to get a few decent shots of Dartford Warblers on Dunwich Heath which I was pleased to see had survived the winter snow! (posted on my Flickr site...http://www.flickr.com/photos/pagman/ )
Posted by Pagham Birder at 11:00 AM No comments:

A quick walk around Pagham Spit before 8.00am and before the mist got too thick and wet (!)I was hoping to see some more overnight incomers.However there was little to be seen, but coming from deep inside a gorse bush near the Little Lagoon the unmistakable di-syllabic call of a Chichaff...another sign of Spring!
100 Brents fed in front of the hide with a few Wigeon; 2 pairs of Teal were present on the Lt Lagoon.
Little else!
Posted by Pagham Birder at 11:25 AM No comments: 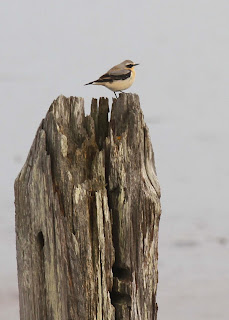 My first Wheatear....always a very welcome sight and in fact there were 2 males at 1.47pm today near the Spit hide . They subsequently headed for the old wooden posts adjacent to the Little Lagoon and enabled me to get a distant record shot. 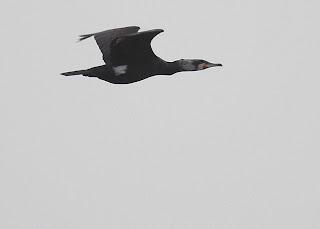 Cormorants are now in full breeding dress and even a Blue Tit visited the garden which is not a daily experience here on the beach. 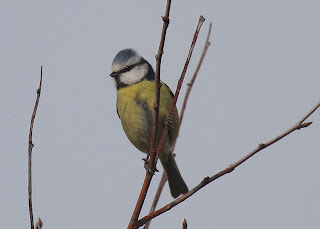 ...so after the long and rather miserable winter there is the promise of better weather. The next target bird....a Sand Martin.

The wader flocks are now much diminished and Brent numbers have dropped dramatically in a week but there were 2 pairs of Red Breasted Mergansers and 4 female Goldeneye on the Lagoon...they too,will be gone very soon now.
Posted by Pagham Birder at 3:39 PM No comments: 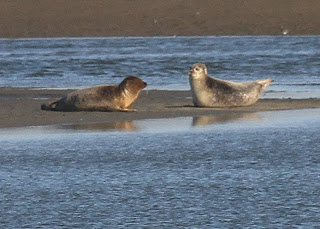 A superb morning with bright sun and a light frost. From the Pagham Spit hide I could just make out 2 seals sunning themselves on a distant sandbank . A little closer 4 Barnacle Geese feeding alongside a group of Brents

Skylarks were singing and a couple of Ringed Plovers in display flight along the beach. I searched in vain for my first Wheatear.,.it can't be long now!!
Posted by Pagham Birder at 9:49 AM No comments:

Very little to report today....a pair of Goldeneye on the Lagoon but precious little else. No sign of the Knot flock, few Brents in the harbour and numbers of Wigeon much reduced.
I noticed on their website that a Wheatear was seen at Portland yesterday so I was hoping.... but alas no sign! Just a few Oystercatchers, Dunlin and Ringed Plover along the shoreline and 20+ Turnstone along the egde of the Little Lagoon and that was about it!

The East Wind is not conducive to migrants or birders at present!

Spring can't be far away, can it?
Posted by Pagham Birder at 4:06 PM No comments: 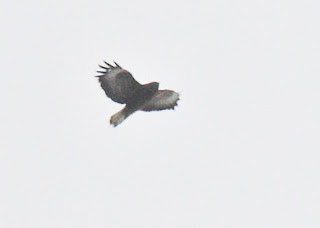 This bird flew in from the sea this afternoon at quite a height and I managed to get a record shot of a possible Rough Legged Buzzard. Anybody comment please. (Sorry about quality...big crop...)
Posted by Pagham Birder at 2:45 PM 1 comment:

Sunrise over the Mulberry Harbour 'wreck'

Another superb morning without a murmer of wind...perfect!! A very high tide covered all but 2 'islands' in the harbour with most waders taking to the fields nearby. Cormorants and Curlews clung to the small piece of Tern Island still showing and the Knot occupied their usual high tide roost spot on the shingle spit. 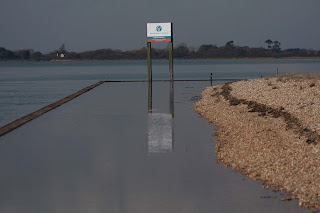 Mediterranean Gulls tend to commute between the Lagoon and the shingle spit and I was pleased to capture this shot showing one coming into summer plumage. 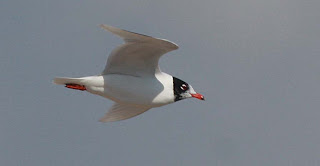 Posted by Pagham Birder at 1:27 PM No comments: 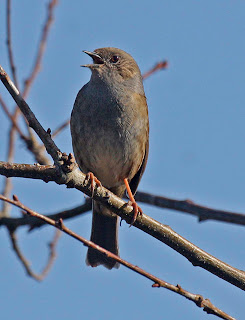 Regrettably the Saltings bird list was too misted up to be readable so no photo as requested by some of you!
Posted by Pagham Birder at 6:31 PM No comments: