For the third morning running 50+ Swifts feeding over the Lagoon.
2 Whitethroats feeding in the gorse, 2 Red Legged Partridges on the beach. A Cuckoo causing much alarm to the numerous Greenfinches and Linnets breeding in the gorse.
I was carrying out my BBS survey this morning and was dismayed to find  no sign of Ringed Plovers.

The hide was obviously well used last night by revelers and this evening I noted 11 youngsters filing into the hide with bags and bags of food and drink...I am not looking forward to seeing inside tomorrow morning!
Posted by Pagham Birder at 8:38 PM No comments: 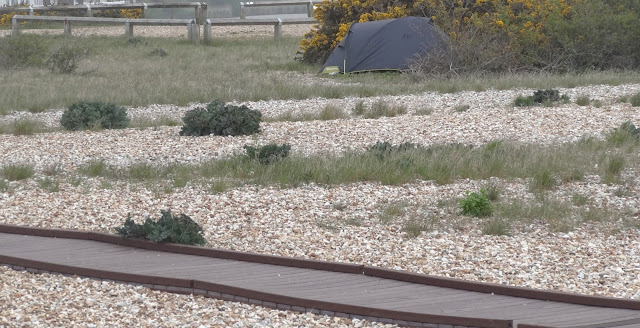 The inhabitants of this tent were well tucked in at 7.30 this morning when I did my early morning patch walk.

Apart from a couple of Whimbrel in the harbour, the Mute Swan still sitting on (a nest maybe) on  New Island and a pair of Common Terns on Tern Island it was all very quiet. The lone apple tree has considerable amount of blossom this year ( at least on 50% of the tree the other  50% appears to be dead or dying)...


An afternoon walk to the North Wall produced very few waders except Whimbrel .The Slipe Field  'dog walk' had a number of Whitethroats singing.
One thing that did catch my eye was a large notice board erected on the eastern side of Church Farm... 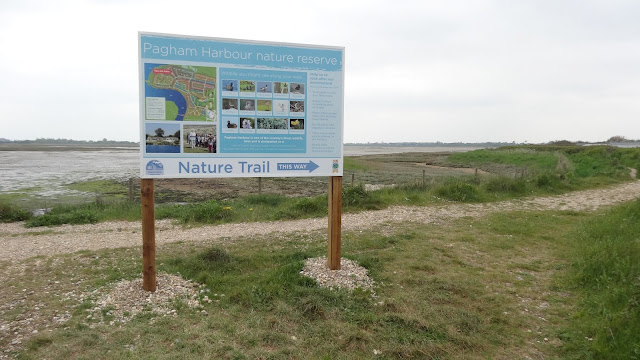 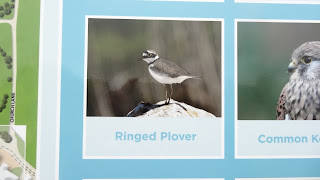 Can you spot the error? One of several actually!
Posted by Pagham Birder at 5:28 PM No comments:

Following a tip off from local birder Peter Callis who had heard one, if not two Turtle Doves near Honer Farm yesterday I set off to Pagham Wall at 7.30am and it wasn't long before I had located the 'purring' of a Turtle Dove in the designated copse.
I approached and located the bird on a very exposed branch, watched it for about 20 seconds in full view when it flew off to a hawthorn in the adjacent field. These birds are becoming increasingly rare  but 20 years ago they were a common sight and sound around the area. For the past few years I have noted a pair in this same area and its good to know they are still returning  albeit in far smaller numbers.

Apart from this,  the Reed and Sedge warblers were in good voice and I watched a pair of Reed Buntings collecting nesting  material and returning time and again to a tussock of grass at the foot of the reed bed.

A distant Cuckoo called and the peace and quiet of the morning was shared with just two other  'early' birders.....

Incidentally, I nipped up to Pulborough Brooks yesterday to see the much photographed Nightingales that featured so strongly on the S.O.S. web site whilst I was away. Click on 'My Photostream on   Flickr'  on the right to see this little beauty!
Posted by Pagham Birder at 7:20 PM No comments:

A superb Spring morning with not a breath of wind ...a distant Cuckoo calling from the Church Norton side of the harbour. 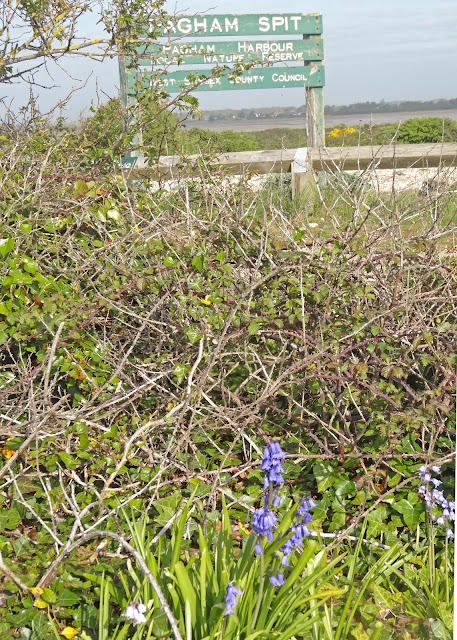 In the harbour still  four Brent Geese and the Swancontinues to sit on what appears to be a shallow nest on New Island.
A Whitethroat was feeding in the gorse alongside the path but the birds most obvious were the Greenfinches with at least 4 pairs calling and singing throughout the Spit...it certainly seems they have made a comeback following several years with reduced numbers. About 6 pairs of Linnets gave the impression of breeding.
Two pairs of  Skylarks were present and two Ringed Plovers were anxious as I walked along the beach...a good sign and I left well alone.

A few Little Terns were flying up the main channel and a very confiding Whimbrel was feeding close to the hide.

In the evening  15 noisy Whimbrel were flying east over the harbour and  I discovered the Ringed Plovers nest and directed two walkers away from the site. Then quite suddenly a Cuckoo called not so very far away. I had my camera and although it meant I shot into the light I managed to get my first ever record of a Cuckoo on the Spit
It stayed for about 20 seconds before making off!


Posted by Pagham Birder at 8:32 PM No comments:

Following a holiday in Mallorca a quick look around Pagham Spit this morning reinforced a comment made to me whilst in the S'albufera Reserve enquiring where my local patch was, that I lived at Pagham... "wow, what a lucky chap to live there!"

A quick look around the Spit this morning and I noted four Brent Geese still here, a Whimbrel and  3 species of tern including three Little Terns...a good sign. A Great Crested Grebe in the harbour and a pair of Mute Swans...one  possibly sitting on a nest on New Island...this is the third year they have looked at this site but previously they have not bred. Linnets and Greenfinches were much in evidence in the gorse and a pair of Ringed Plovers looked possible breeders on the beach.

A large seal was languishing in the harbour in front of the bungalows.

As this is a blog mainly about Pagham birdlife I will not include any more about Mallorca and the birds suffice it to say we saw a good number of species we would be delighted to see here more often...here's a taster and I shall be posting a few more on my Flickr site in due course.

Now its time to get out and about and catch up on some of those species I've missed whilst away!

Posted by Pagham Birder at 12:15 PM No comments: