No sign of the Dartford Warbler today. A great pity in view of the much improved conditions....lightwise. I also  missed a Short Eared Owl according to visiting birder Tim who was up and about before me this morning.
Wall to wall sunshine all day but a visit to the North Wall was not very productive. Highlight perhaps, was a Clouded Yellow butterfly... 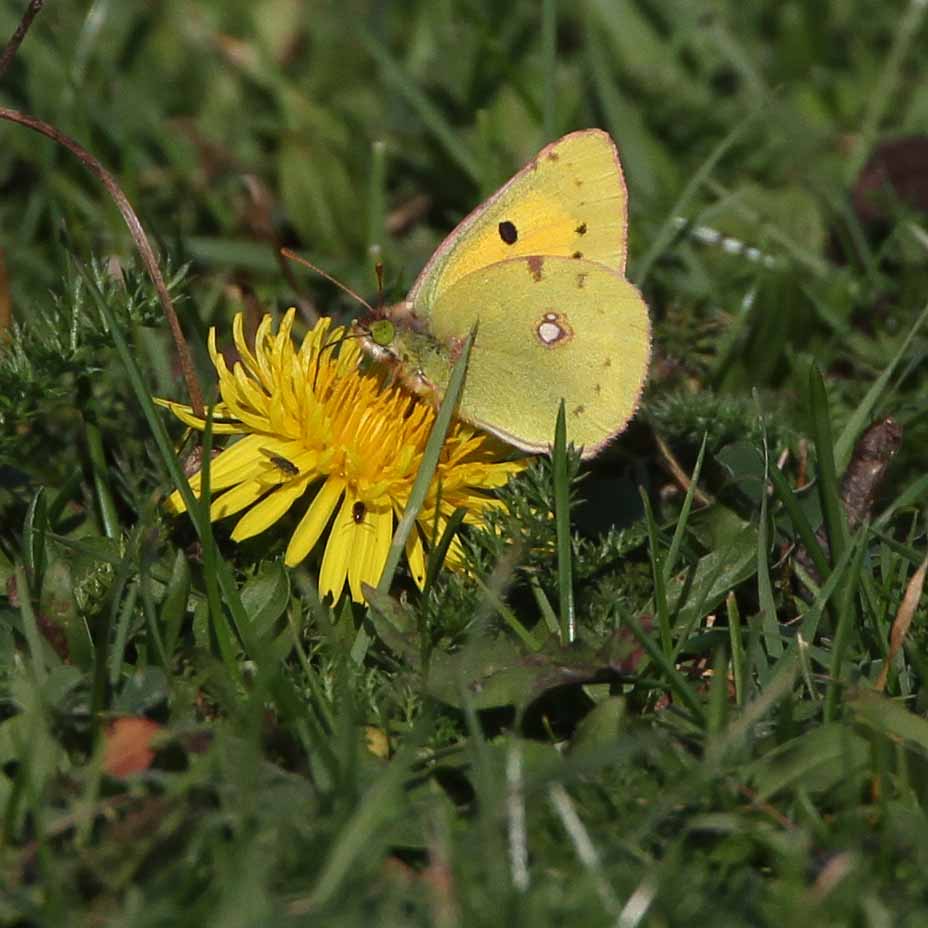 The usual selection of birds were present but somehow photographs were few and far between and
my hopes of a really good photography day did not come up to scratch. However here are a few... 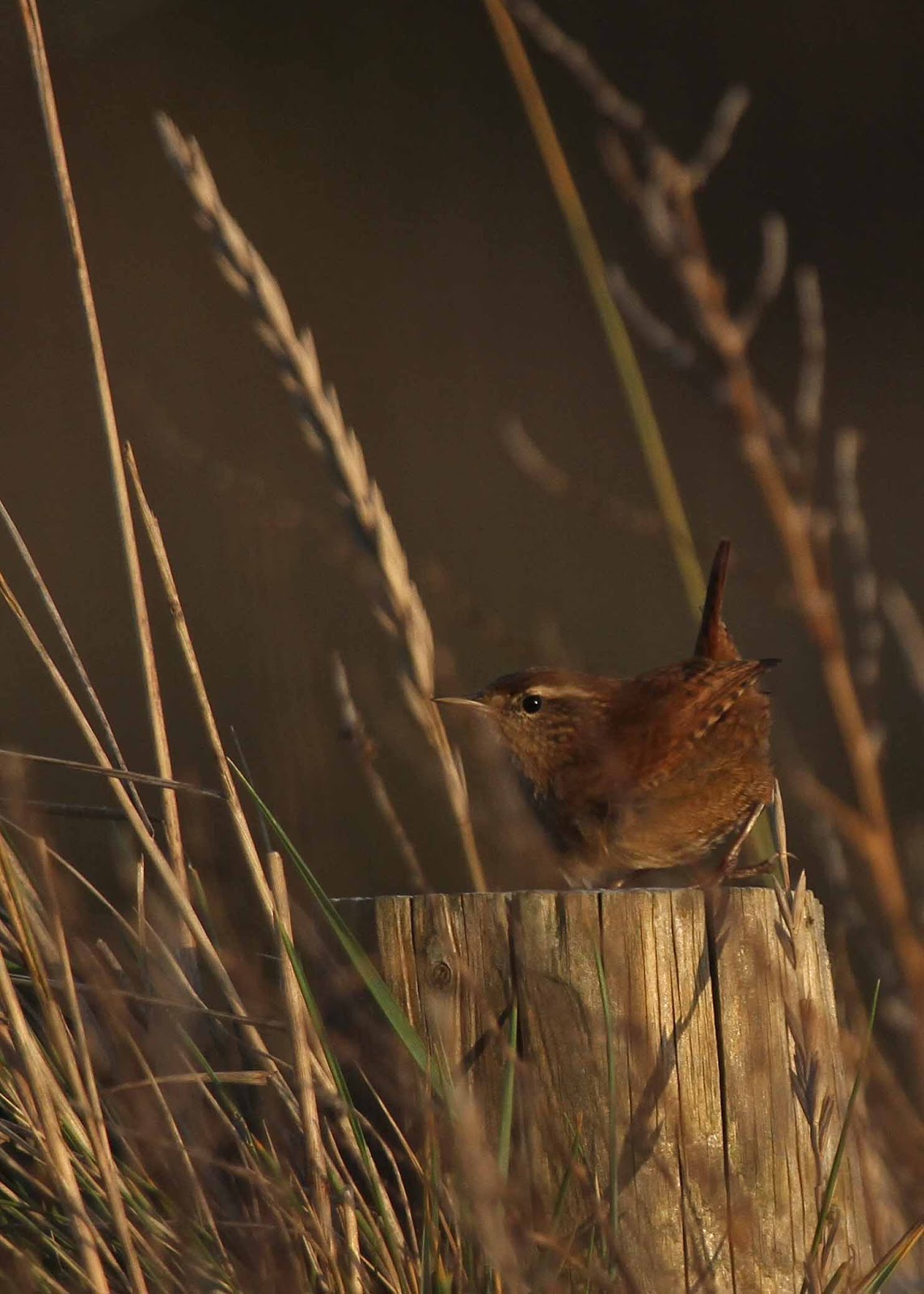 ...so there we have it...a pleasant day but nothing to get the adrenalin rushing!
Posted by Pagham Birder at 5:08 PM No comments:

At 8.30 this morning the Dartford Warbler was still showing along the path east of the Little Lagoon near the apple tree....but elusive and quite mobile. A very dull morning hence the poor photos! 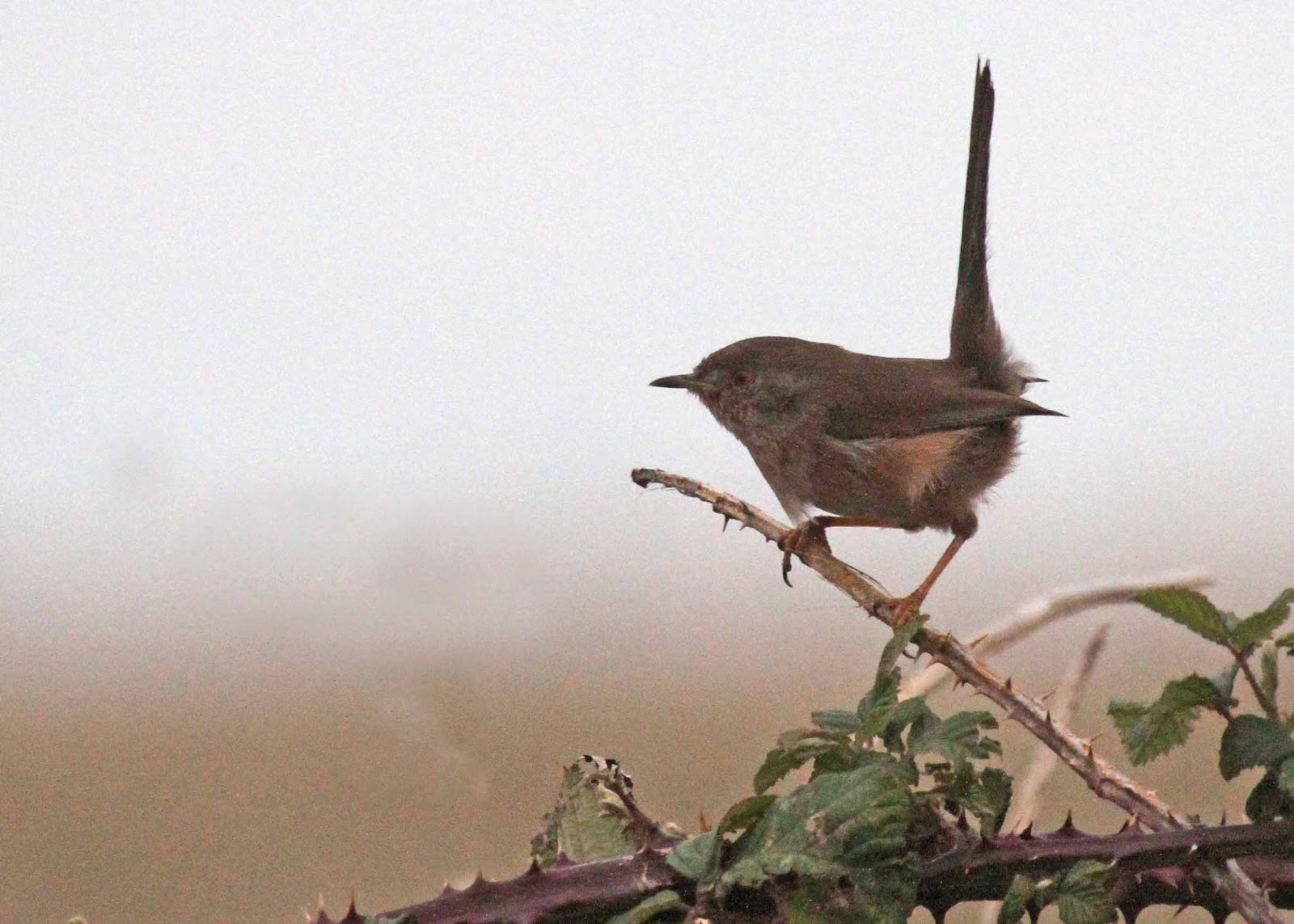 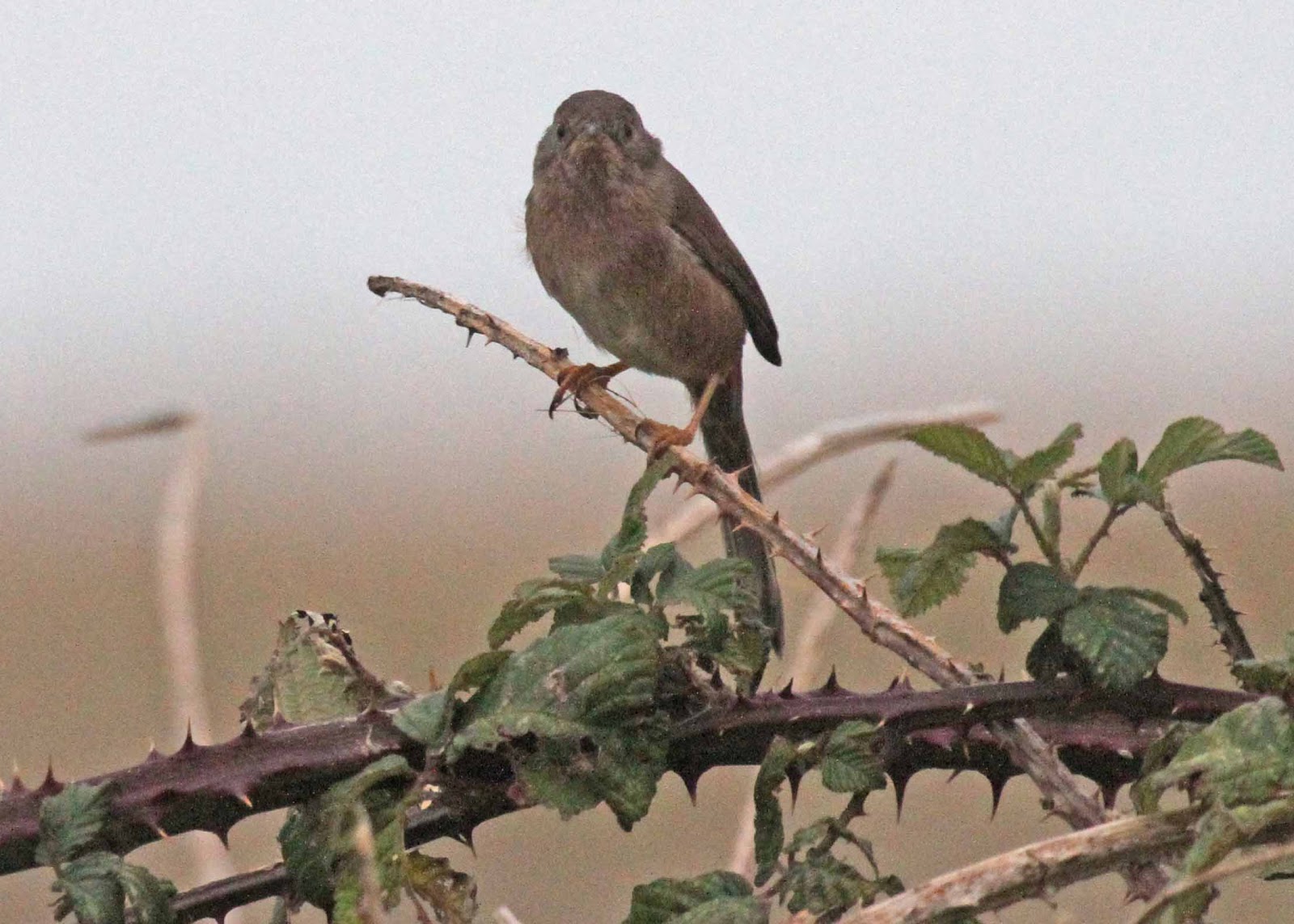 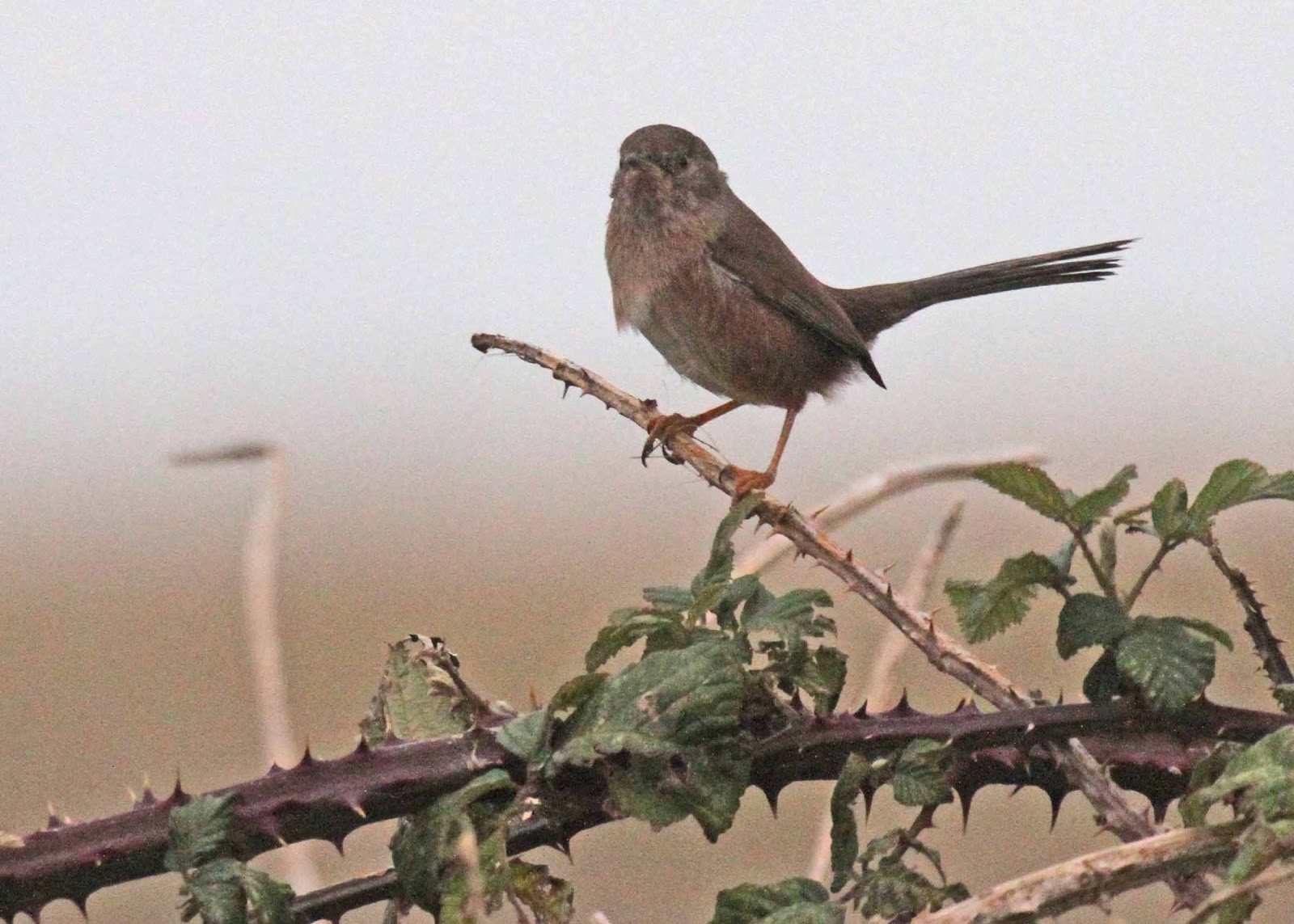 Nice bird to see but shame the light wasn't better!
Posted by Pagham Birder at 9:08 AM No comments:

A surprise at the end of the day!

A busy non birding day ended with a surprise.
A quick walk up to the harbour just before the sun was setting and a Wheatear perched on a 'dogs on lead' sign in the sunlight...
As the sun went behind a cloud the gloom descended and I almost turned back but decided to walk towards the hide when a bird appeared on top of a bush. My immediate thought was that  it was one of the usual Stonechats that have been hanging around for the past couple of weeks but as I raised my 'bins' suddenly realised it was none other than a Dartford Warbler. The light was awful so I raised the ISO on the camera and managed to get a few record shots. 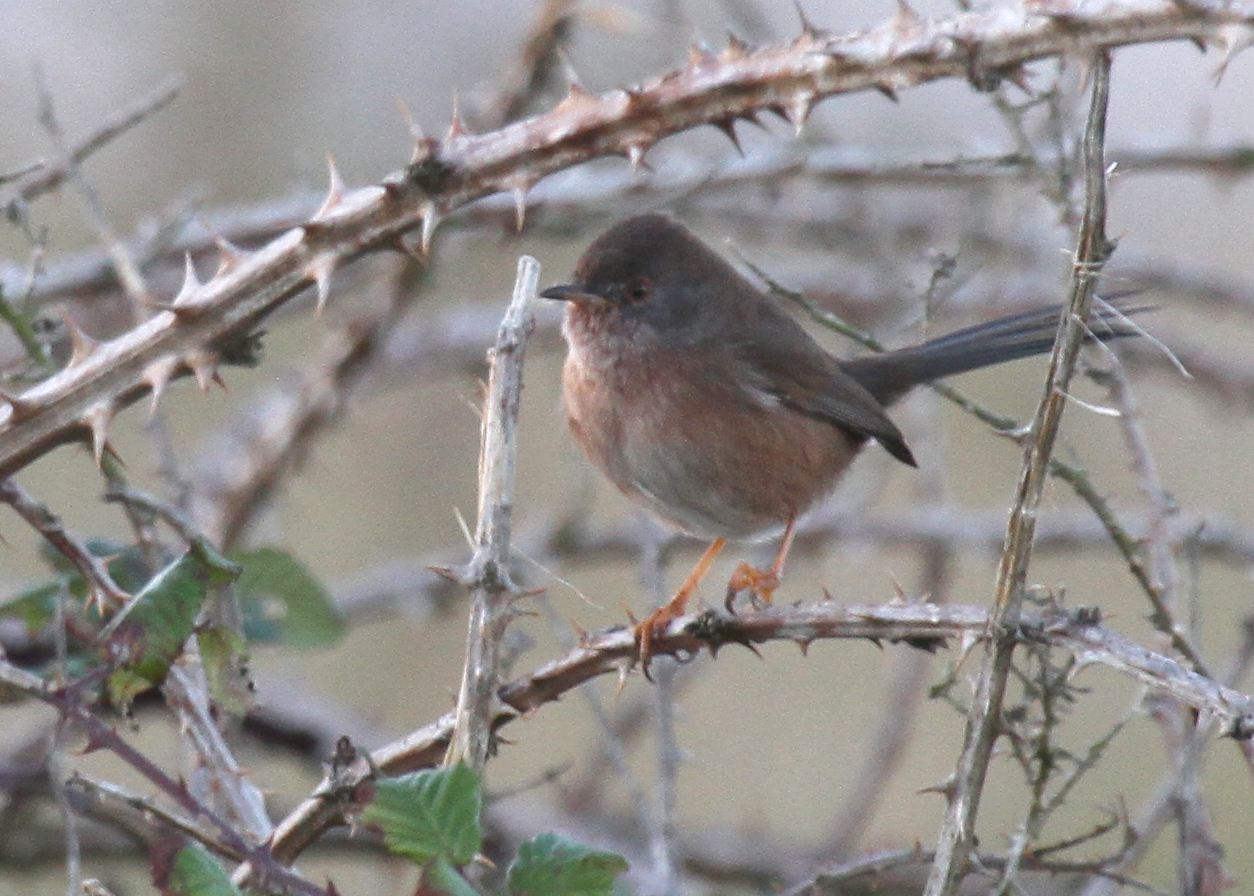 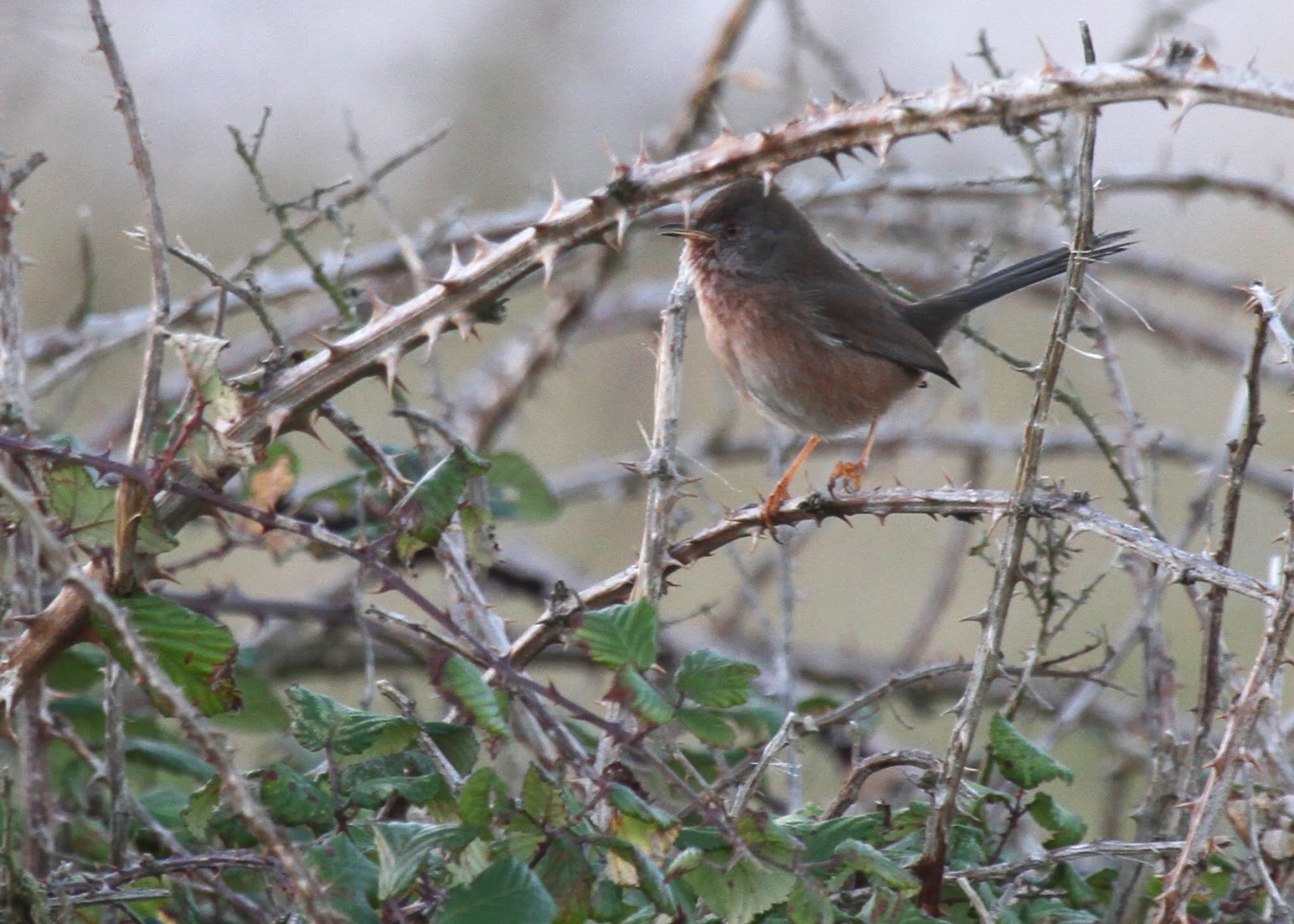 Posted by Pagham Birder at 6:34 PM No comments:

My first Sawbill of this Winter,

This bird had presumably just flown in and was in the new channel just in front of the bungalows. Brents continue to arrive daily....

A pair of  Stonechats are still in the gorse along the path to the Spit Hide. Here is the male... 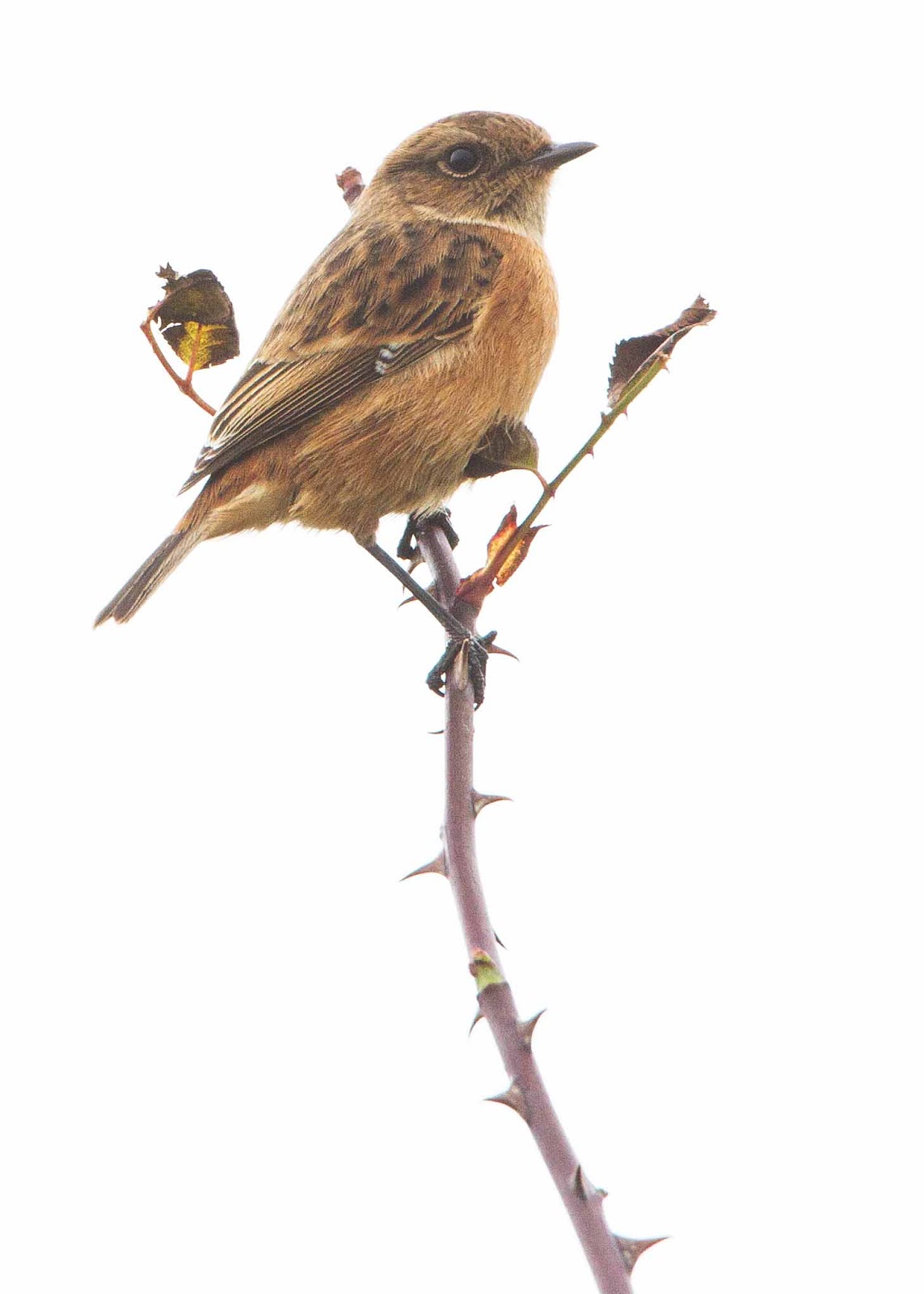 Earlier in the day I made my second visit to Cissbury Ring in a week to see, or better still, photograph the Ring Ouzels that many observers have been enjoying. Not a squeak! Third time lucky... hopefully!
On to RSPB Pulborough Brooks to check out the Grey Phalaropes reported for the past few days....another blank!
But.... there was a distant Red Breasted Goose on the Brooks with hundreds of Canada Geese....too far for even a record shot.


On West Meads apart from more Canada Geese,Wigeon and Teal there was a single Egyptian Goose 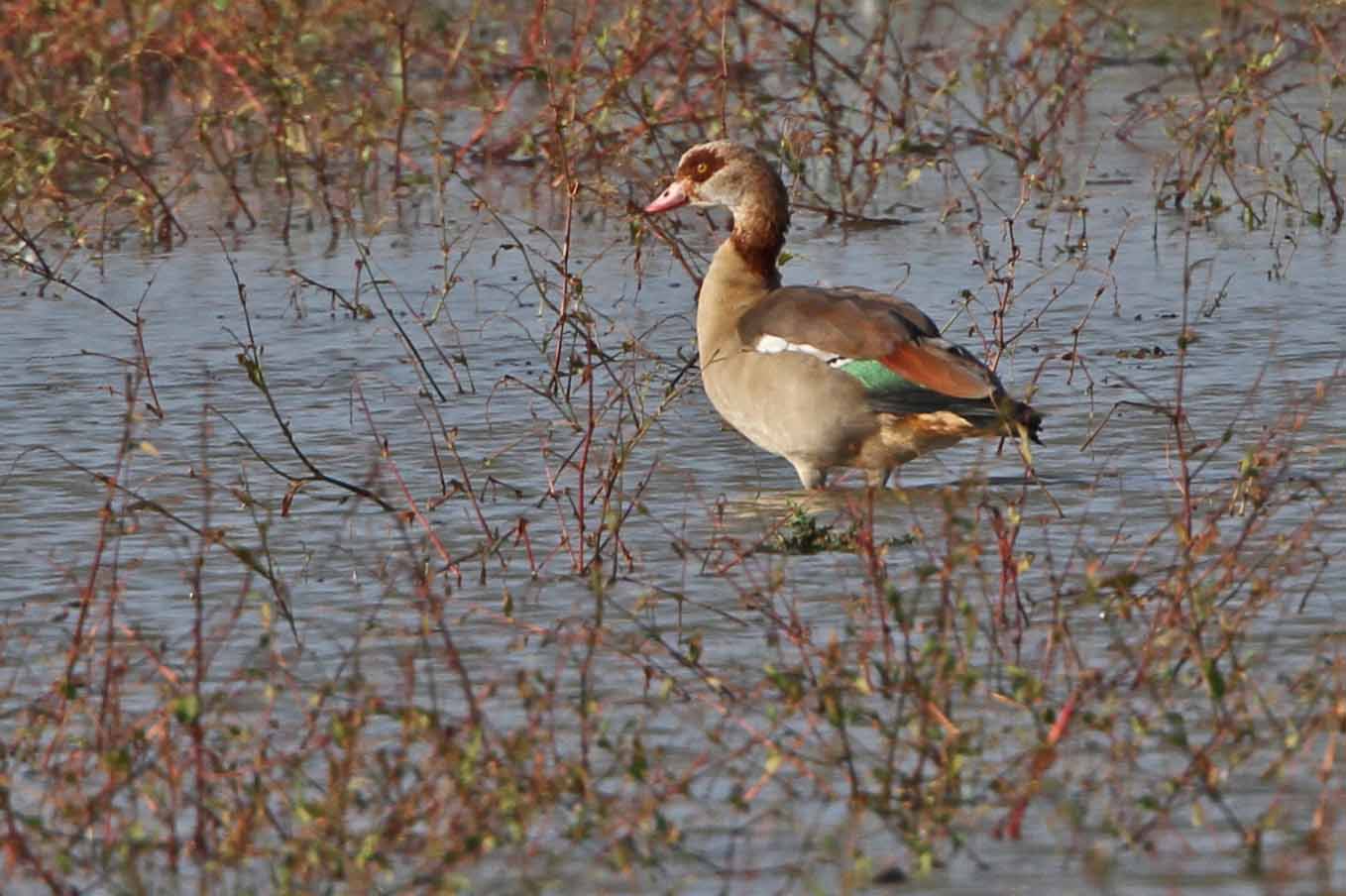 An early  inspection of the spit this morning produced a mixture of birds....some coming for winter, others leaving our shores for warmer climes.
A few Wheatears were flitting from gorse to gorse.
A single Meadow Pipit dropped in for a moment or two but didn'nt stop long.
A pair of Stonechats have been here for a couple of weeks now.
Brent Geese have been arriving in small parties all through the week and numbers are really building up now.
For an hour or so this morning Hirundines were were flying west towards Selsey some stoppng for a while on the protective fencing.,.. mostly Swallows but a few Sand and House martins.

Later in the morning I wandered along the shoreline towards the North Wall  but the clouds threatened rain, so an early return was necessary if I was to avoid wet optics!  Nevertheless a few waders showed up.... 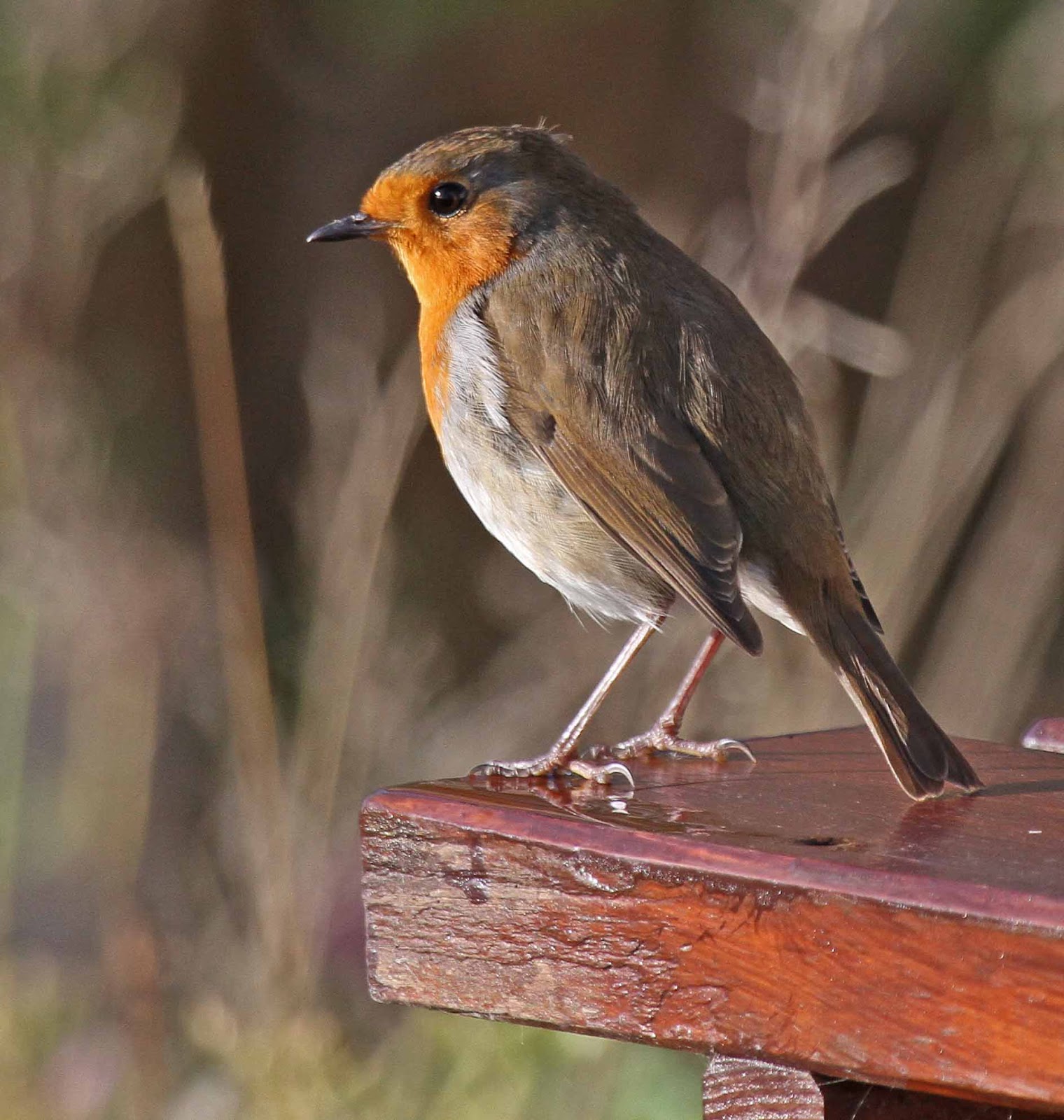 Living on the beach, as we do,  is not an ideal habitat for Tits so it is always good when they visit us. This morning we had both Great and Blue Tits...they didn't stay long and were gone within  a minute or so...I just happened to be going out on my morning walk with the camera.
Posted by Pagham Birder at 4:55 PM No comments:

The Cattle are in the field!

High expectations as I walked past the Salthouse this morning. I could see a herd of cows in the field next to the Breach Pool! The Cattle Egret MUST be there this morning! Not so!

The pools had the usual waders, Blackwits,Snipe, Lapwings....

Four Stonechats were present on the fence, several Reed Buntings together with small flocks of mixed finches were feeding in the bushes, a Cettis Warbler burst into song and a distant Water Rail did his 'squealy pig' thing! But no sign of a Cattle Egret So it was back to the Kingfisher spot to try and get that 'fish in the beak' shot. Having sat patiently for an hour or so it did appear and it did catch a fish but it decided to fly to a distant mud hump and despatch the fish well out of camera range! 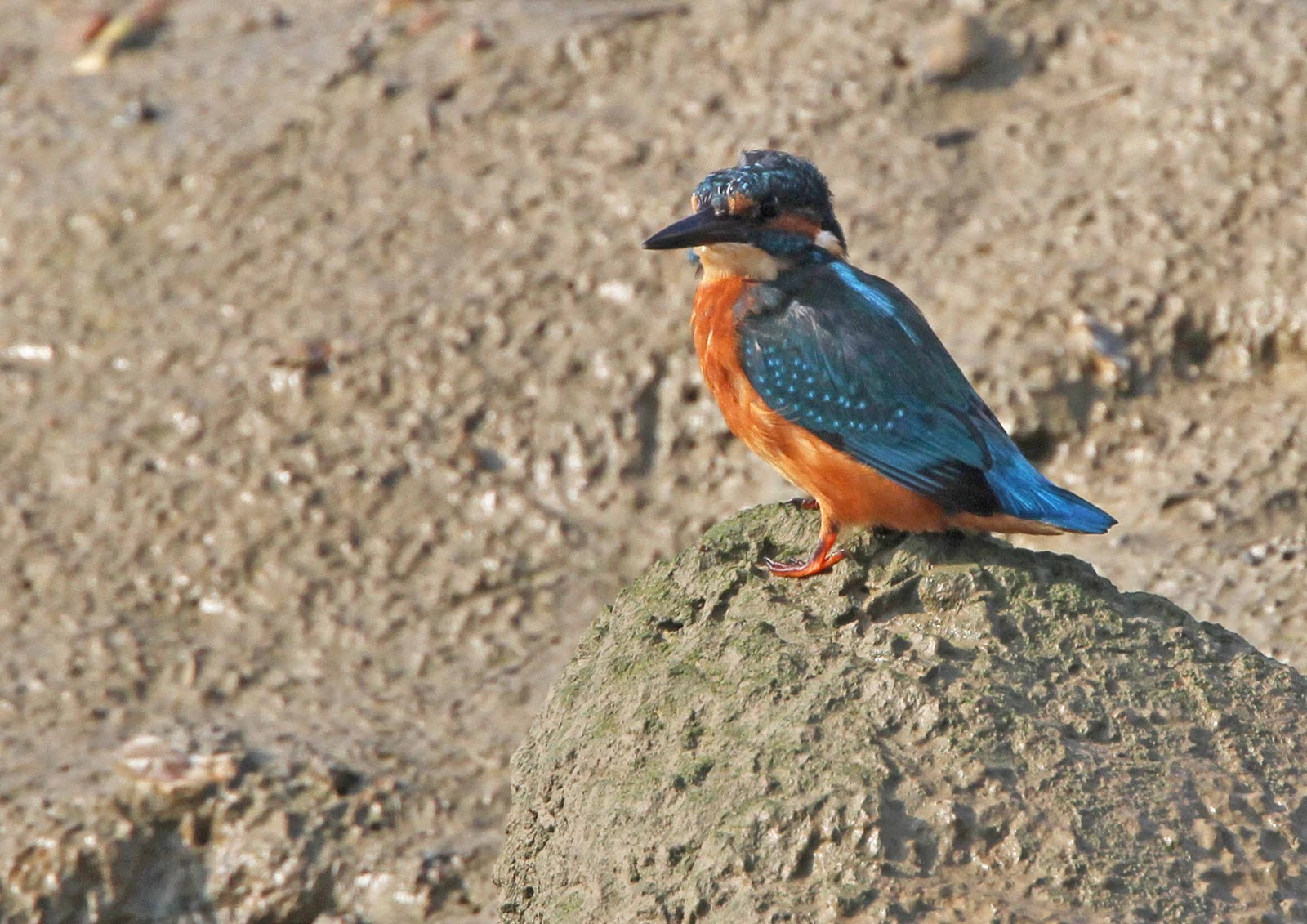 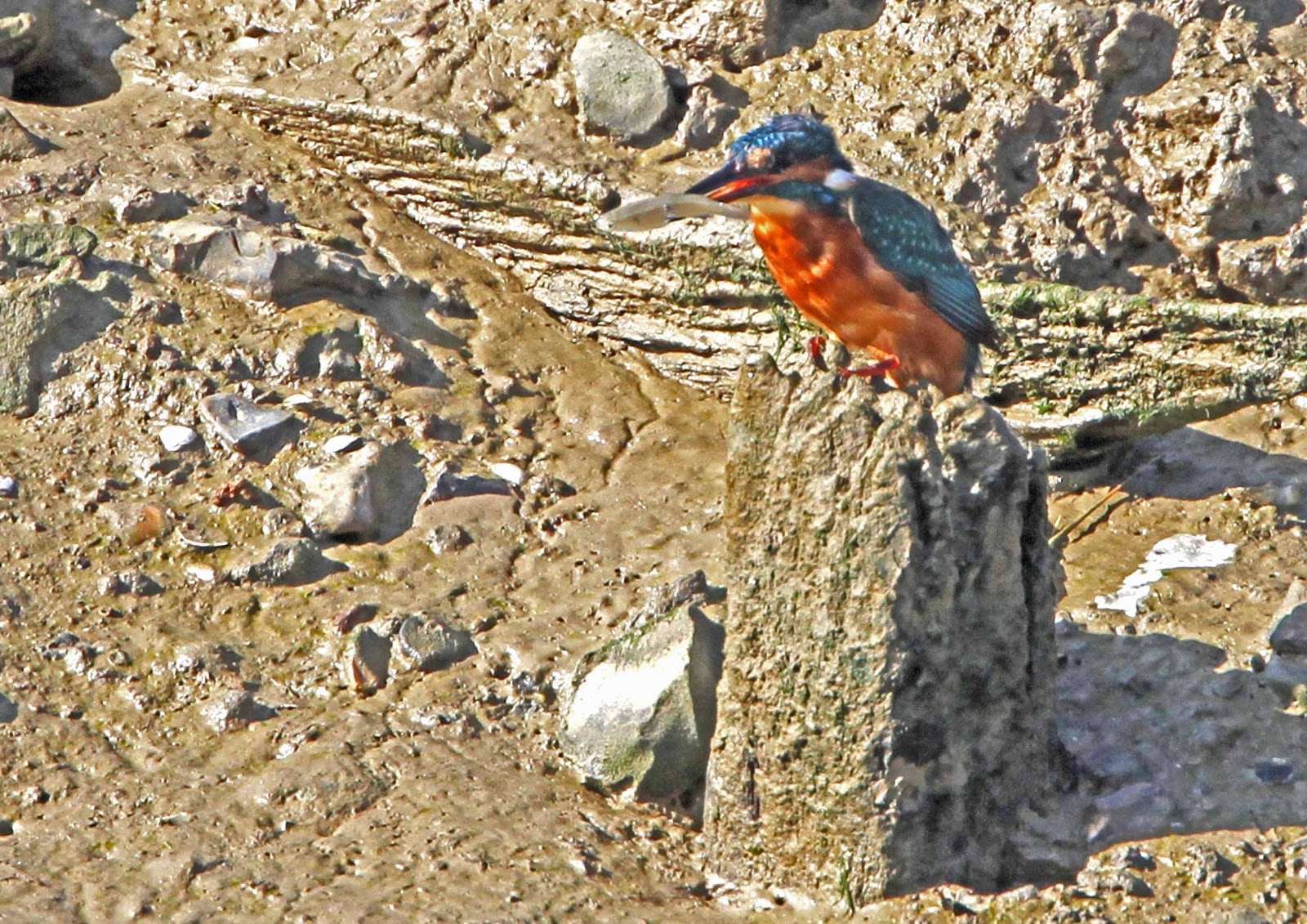 Far too far away and not a pretty picture....another day perhaps!

Whilst waiting I noticed a Black Headed Gull was using his own  'Kingfisher' tecnique...diving for fish, not very successfully I noted; but it was something to photograph while I waited patiently! 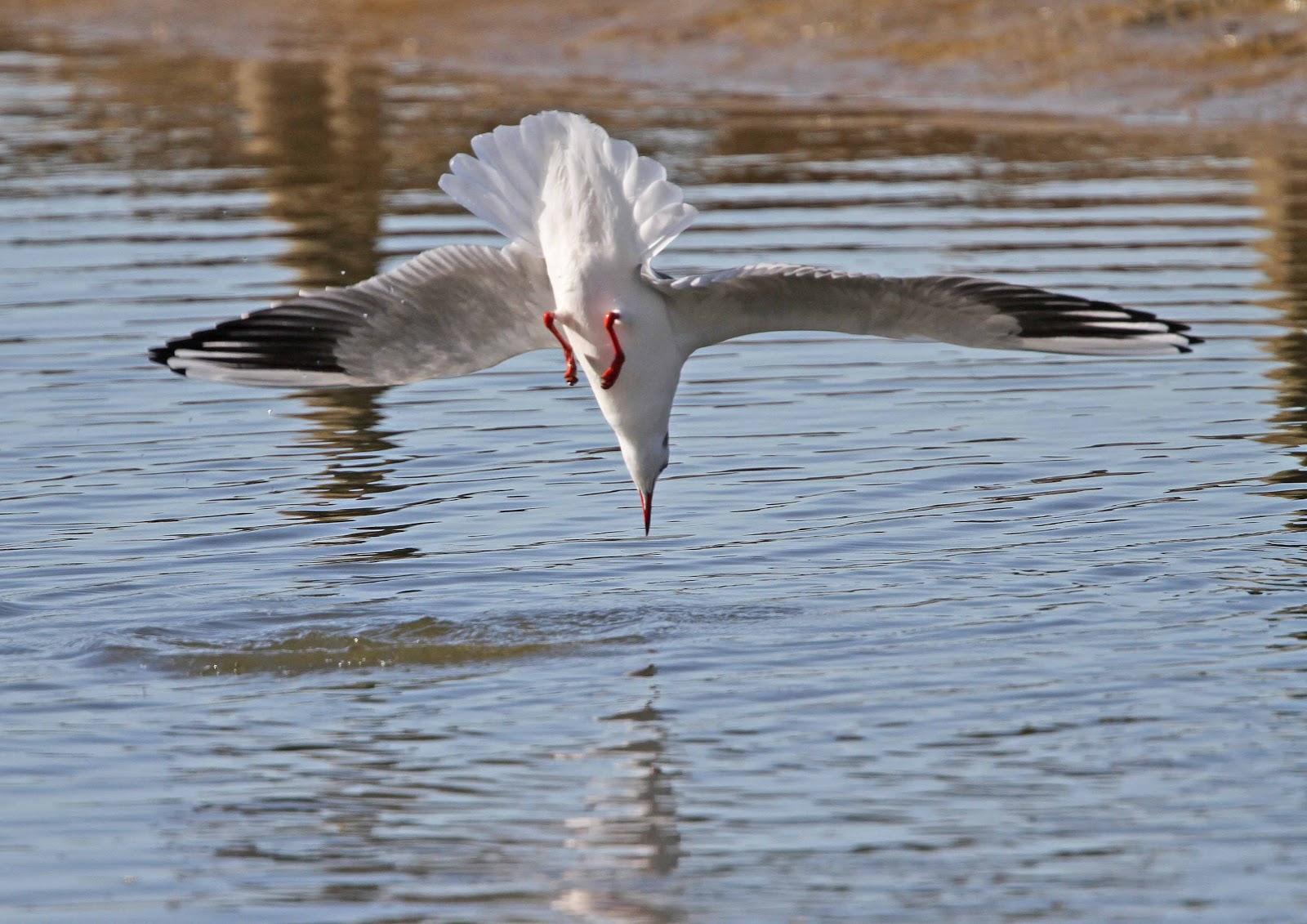 Result....nothing!   About as good as I had got this morning! I gave up on the Kingfisher!
Posted by Pagham Birder at 6:46 PM No comments: