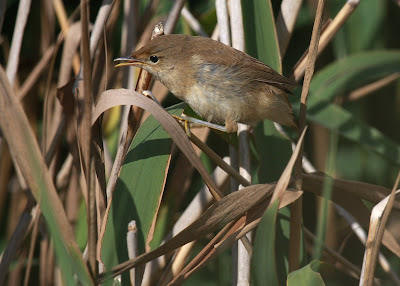 Had a call left on the answerphone when I arrived back home last evening to tell me there was a Wood Sandpiper on Breach Pool...so hurried down at 8.30p.m. to get good views of the bird....but this morning , regretably, no sign.

Reed Warblers much in evidence feeding young and a pair of Sedge Warblers likewise.

On the beach this morning two 2 or 3 day old Ringed Plover chicks feeding themselves but how long they will survive remains to be seen. I dont like to sound pessimistic but there are many dogs running loose and the carrion crows are still hanging about!

The good news is that the Swallows nest in the hide now has 4 eggs and despite some disturbance from from people going into the hide the Swallows are still going in and out.
Posted by Pagham Birder at 11:27 AM No comments:

The eggs of both the Ringed Plover and the Oystercatcher that I have been monitoring have disappeared and neither sets of parents were nearby this morning..... 4 Carrion Crows were patrolling the beach, menacingly.

The swallows are still in the area but don't appear to be going into the hide. Although I have put a notice on the door 'swallows are nesting....please don't enter' there is evidence that it has been used as additional flaps have been opened. The majority of visitors are respecting the request.

A few curlews are present today and the Little Terns are much in evidence but generally it is typically quiet for June.
Posted by Pagham Birder at 6:10 PM No comments:

Moe about the 'hide' swallows

The Swallows seem to have completed their nest inside the hide and in fact 4 Swallows were flying around outside the hide this morning. I have put a notice on the door to encourage people to leave the birds in peace and not use the hide at present.
Posted by Pagham Birder at 2:54 PM No comments:

Half a swallows nest! 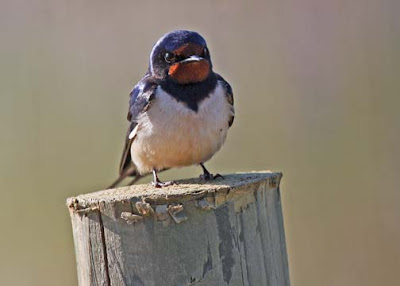 The Swallows are now very busy in the Pagham Spit hide and the nest is about half way to completion....this is a first for my patch but I am not certain about the liklihood of success. I notified the Centre and hopefully the hide can be locked with the flaps left open...time will tell.
The Ringed Plover is brooding 4 eggs and the Oystercatcher is sitting but she is in a vulnerable area. Both these nests are outside the protected area...if only they could read the notices!
Posted by Pagham Birder at 3:56 PM No comments:

Whilst carrying out my local BBS for Pagham Nature Reserve I noticed that the Spit hide door and all the flaps were open. Surprisingly a pair of Swallows were perched outside and one of them had mud in its beak and was obviously nest building, or about to start.
As I entered the hide I very quickly knew the reason for everything being open...the rancid smell of rotting fish and worms was overpowering. A quick search revealed that a bag of unmentionable 'awfulness' had been hidden by a kindly fisherman....and was now well and truly alive...enough said. Funny?...NO.

All is quiet at Pagham 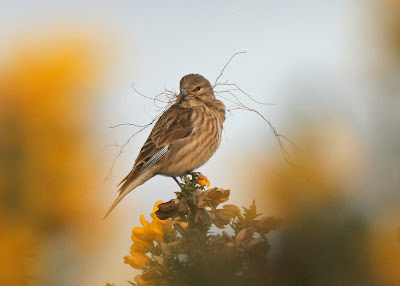 June is usually a quiet month for the birder on Pagham Beach...waders are at a minimum so 3 Grey Plovers and 5 Dunlin in superb summer plumage was a bonus today. Linnets are still building nests in the gorse and Little Terns are still much in evidence in the harbour. An Oystercatcher laid an egg on the beach last week but it was quickly taken, I think by one of a pair of resident Carrion Crows. Ringed Plovers have had several attempts at breeding and although I have seen several nests with eggs I have not seen a single fledgling. I blame crows or disturbance by dogs or possibly a fox which has recently taken up residence near the Little Lagoon...what chance do they have!!
A pair of Common Cranes were reported from nearby RSPB Pulborough Brooks yesterday afternoon and again this morning. I was about to set out to find them but alas they were reported to have flown off in late morning.
Posted by Pagham Birder at 3:42 PM No comments: 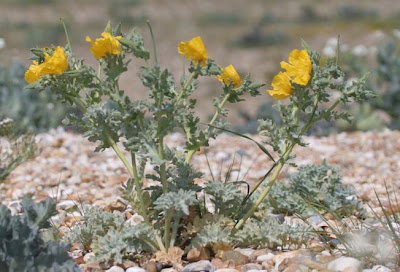 The tail end of last week saw a lot of excitement when a Collared Pratincole turned up on Breach Pool...unfortunately I did not have my camera (Canon 40D) as the fresnel screen had been smashed internally during an emergency stop in Islay recently whilst trying to photograph a Barn Owl....but thats another story! However, after much discussion and email correspondence the Pratincole was subsequently identified as an Oriental Pratincole !

The night before last we took a trip up to Pulborough Brooks and not only did we hear Nightingales but one particularly obliging individual performed for several minutes beautifully exposed on the top of a hawthorn! We felt very privileged as they are usually very well hidden.

This morning on Pagham Spit I disturbed a fox near the Little Lagoon and, as my camera had been repaired and returned yesterday, I was able to get a few shots of it... 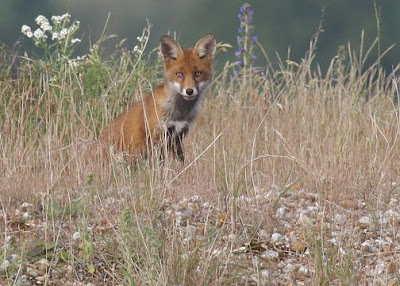 ...and then in,on and around the hide a squirrel appeared. As the spit is virtually treeless a squirrel is a VERY uncommon occurence. 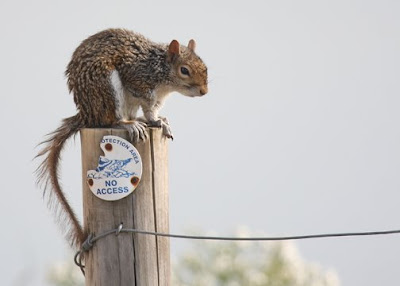 The beach is looking at its best at present with Valerium and Sea Kale in full bloom and Vipers Bugloss and the very rare Childing Pinks now beginning to blossom. 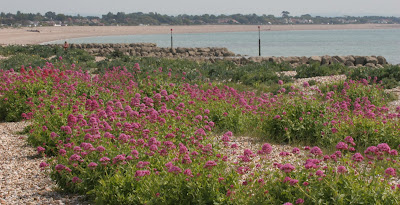 A view towards Aldwick
Posted by Pagham Birder at 11:41 AM No comments: