The Brents are back!


In an hour from 2.00pm small flocks of Brent Geese were flying in from the East and passing westwards. They were at varying heights with most flying past Pagham and on to Selsey and beyond, but a few flew over our bungalow and although I didn't see them land I guess they will now be found in the harbour. 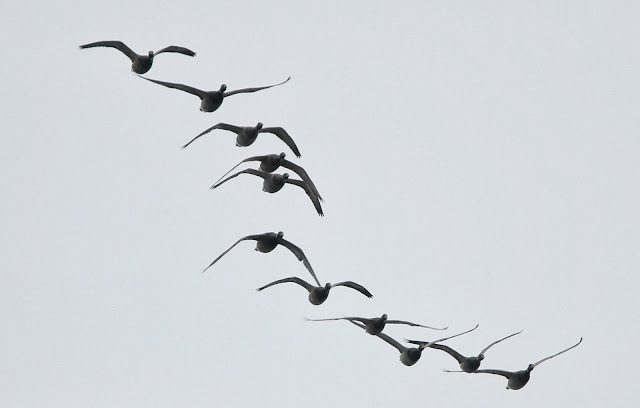 The Brents are arriving. 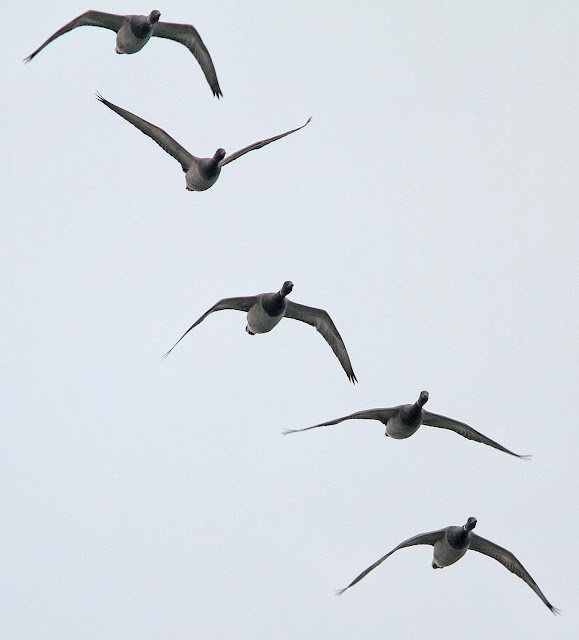 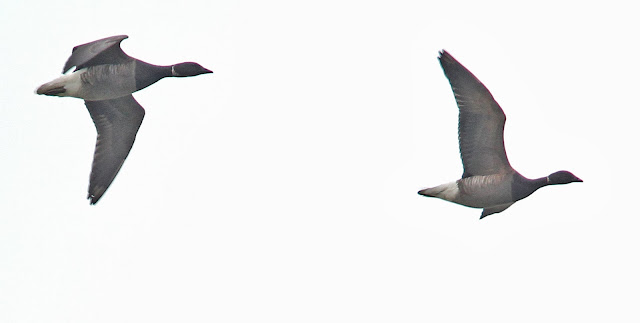 Winter is a coming!
Posted by Pagham Birder at 3:43 PM No comments:

Just as soon as I set out for the Spit hide  I realised there were a few migrants on the move...Hirundines mostly but Warblers, Chats and Pipits. A couple of Wheatears were in the old car park area and as I set up the camera a group of 6 Meadow Pipits literally fell out of the sky into a bush not 20 feet away from me. 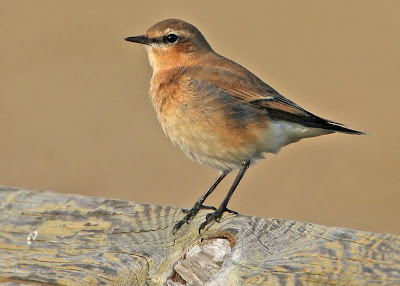 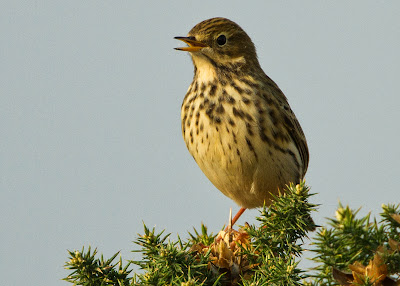 Swallows and House Martins were mainly hawking insects over the Lagoon but a few occasional rested on the telephone wires. 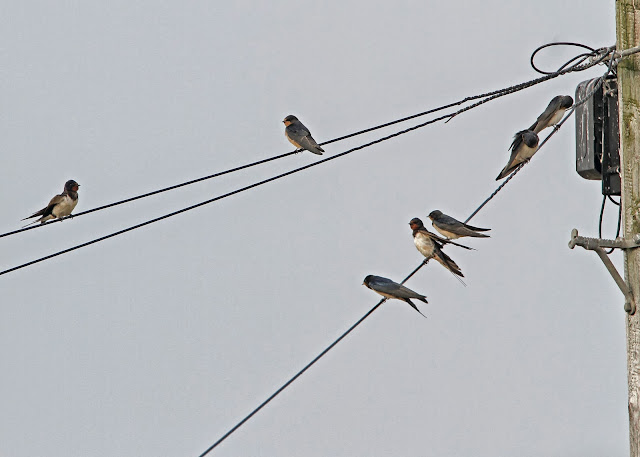 Plenty of waders in the harbour but this Curlew caught my eye as it was fishing for crabs with great success.
....and then a Blue Tit posed for the camera.

Well that's it for Pagham Spit but I was up at Cissbury yesterday looking for Ring Ouzels and I notice that Alastair from Brighton put a comment on the SOS web site. I met him for the first time and we watched the Yew  tree for some time as we chatted but as he mentioned we only saw 2 Mistle Thrushes...here they are. 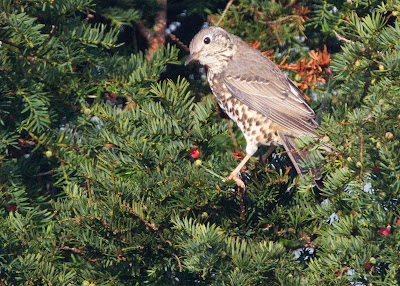 t ...and then it was on Pulborough Brooks 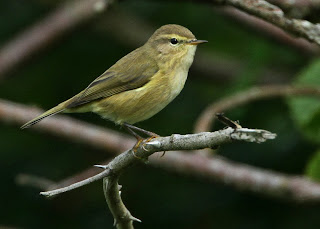 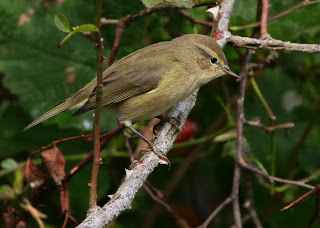 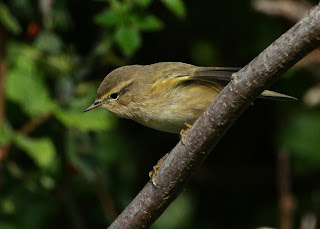 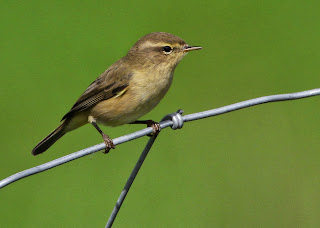 ...and a few Phylloscopus. 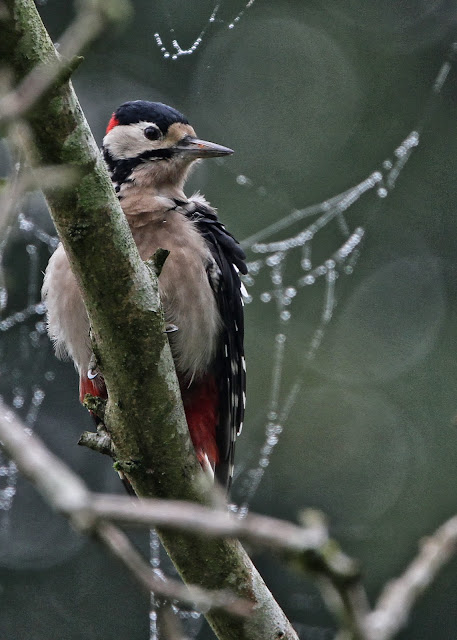 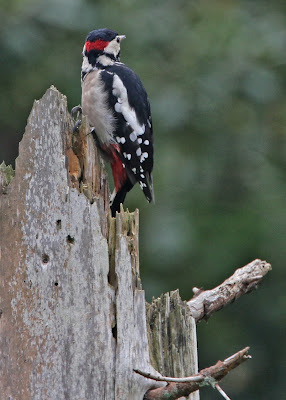 A couple of Redstarts and 2 Spotted Flycatchers also present around the reserve.
Posted by Pagham Birder at 2:58 PM No comments:

Following on from  my post yesterday at just after midday the heavens opened and it was a wet afternoon but just after 5.00p.m. sun came out and I hastened down to the North Wall to improve on my earlier 'record' shots of the Curlew Sandpipers. The sun was fast disappearing but the light was superb and the water took on a golden glow ensuring I captured  some atmospheric shots of the Curlew Sands. 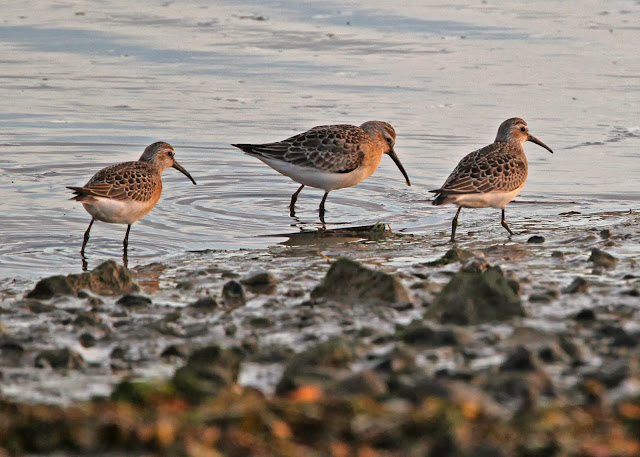 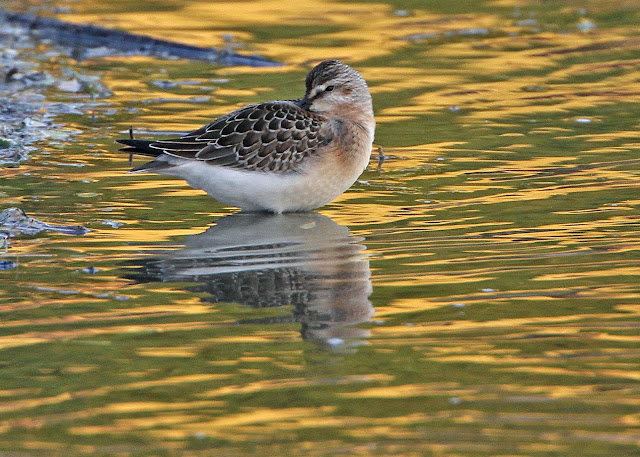 This morning dawned bright and sunny, so down to the North wall again at 7.30 only to find Dave  already there with his latest piece of cutting edge equipment!

Posted by Pagham Birder at 3:42 PM No comments:

Quick visit to Spit hide..a hiker from Dover to Winchester using it as a stopover for the night! A few Chiffchaffs in the bushes (10+)  Meadow Pipits flying over plus House Martins and Swallows  (250+)

On to North Wall ....Grey Wagtail, more Swallows and House Martins moving east, Kingfisher on Breech Pool  and Wheatears and a Whinchat on fence posts in front of Honer farm. 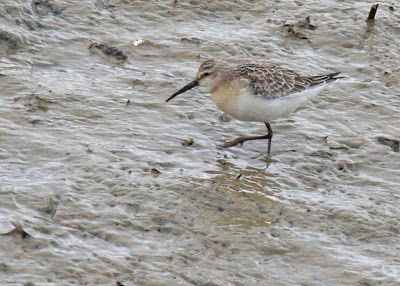 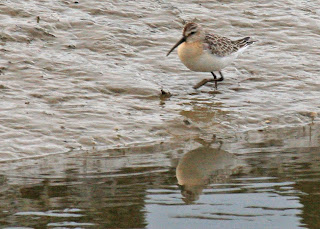 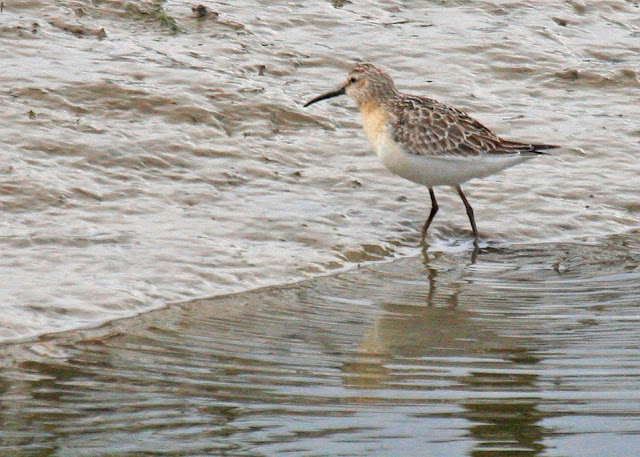 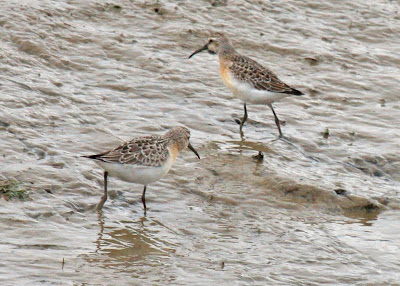 Back at the harbour entrance for very high Spring tide at noon and noted 35 Little Egrets and 7 Grey Herons on Tern Island.

Posted by Pagham Birder at 4:04 PM No comments:

After a quick early morning walk up to the Spit hide it was the presence of a Stonechat (my first this Autumn) and a few Chiffs that made me decide that a visit to Church Norton would be worthwhile. How wrong I was....a pair of Blackcaps a mixed flock of roving Tits and that was it. At 9.15 the car park was suddenly overwhelmed by cars and bird watchers...a local group had arrived en masse. Time for me to bale out!
Returning home I decided to check the North Wall. Few birds initially but good to meet up with Dave P, Martyn, et al. A wader arrived on Breech Pool and initially caused a lot of interest . Dave clicked away furiously whilst I returned for the camera but alas by the time I returned the bird had flown! Seeing the results on his blog it was undoubtedly a Ruff! 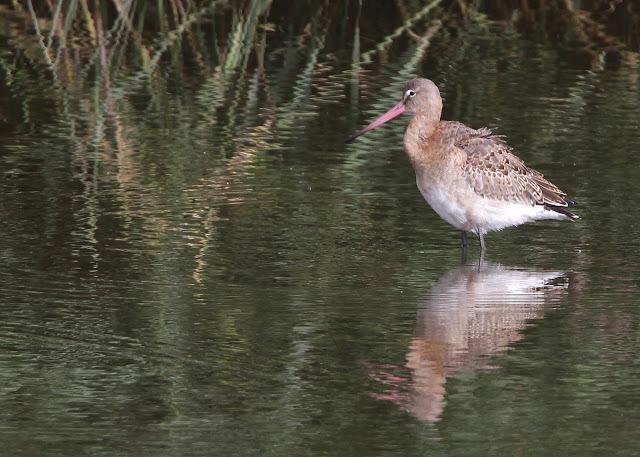 ...but as we chatted we noticed a disturbance on the far side of the harbour and eventually made out a Marsh Harrier causing a bit of chaos as it flew low over the marsh and eventually circumvented the harbour and made its way behind Honer farm. A few distant shots against the light...far from ideal...'record shots' as they say! 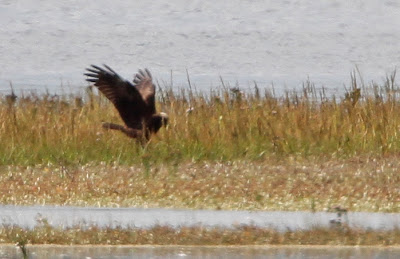 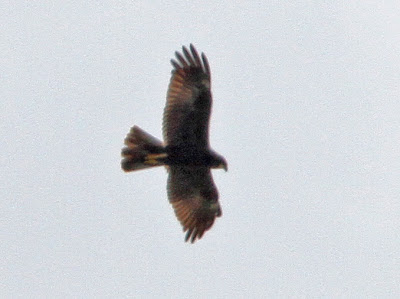 Posted by Pagham Birder at 6:59 PM No comments:

...and a quick walk along Pagham Spit was a necessity before Sunday morning service in brilliant sunshine. The bushes were full of Chiffchaffs and a few obliging Wheatears so  I quickly returned for the camera just in case there was something a little more exciting.  As it happened there were no surprises but the best sighting was a Lesser Whitethroat but no photo regrettably. However the Chiffs were approachable so the shutter was clicking furiously... 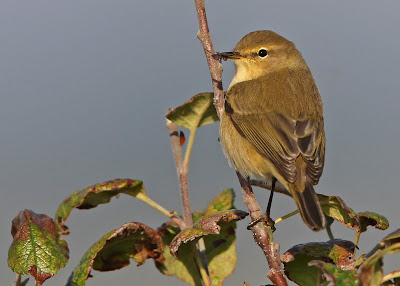 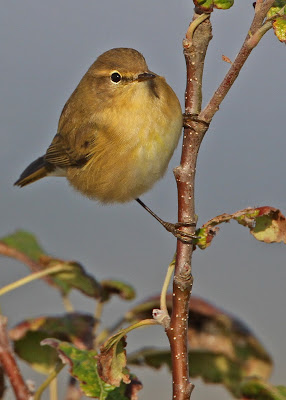 Just a couple of Wheatears feeding along the tideline and hopping into the gorse as dog walkers passed by in a continuous stream!
Five Meadow Pipits were also disturbed before taking off for a more peaceful location. The Peregrine was at the normal island spot accompanying a Heron.

As I returned the 4 Lagoon  Cygnets that have now grown up appear to be separated from their parents and flew overhead quite close!


...and just a note about Suffolk or perhaps a few photos... initially the week was fine and migration did not produce anything of note.
The highlight had to be the three Great White Egrets at Minsmere viewable from  Island Mere but only distant and hence record shots only.

A Kingfisher performed to the side of the hide at Island Mere but it was late in the afternoon and the sun was almost directly behind! 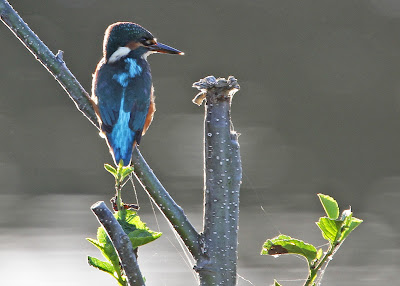 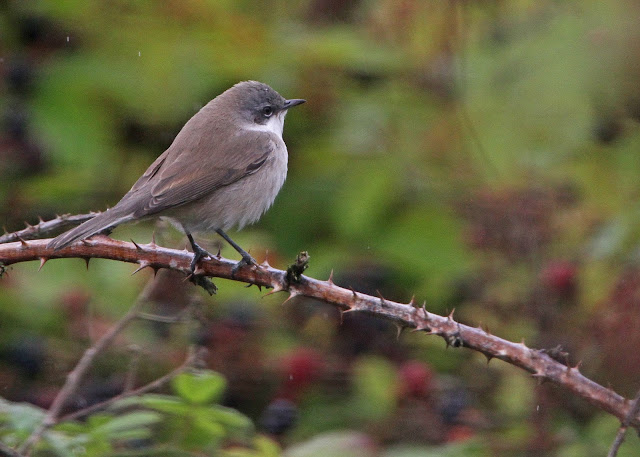 ....and today  note on Bird Guides that a Red Backed Shrike has turned up a 100yds from where we were staying! Tha'ts birding for you!!
Posted by Pagham Birder at 5:09 PM No comments: