The Short Eared Owl was present on the Pagham Spit again this morning and a late Swallow flew west .
Skylarks and finches were moving west and a number of Blackbirds and Song Thrushes had obviously arrived overnight.

A pair of Red Legged Partridges on the beach today was a bit of a surprise...seemed somewhat incongrous!

2 Sandwich Terns in the harbour.
Posted by Pagham Birder at 5:17 PM No comments:

A late Tern on an early morning.

At 7.15 this morning as I was awaiting the sunrise a Sandwich Tern flew out of the harbour mouth calling as it departed.

...and then the sun came up....here are a few images taken in quick succession from various points...a good time to be out and about!! 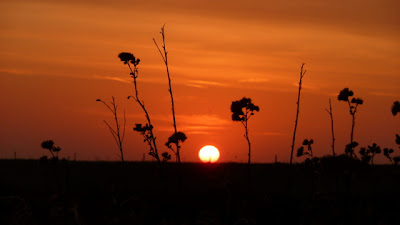 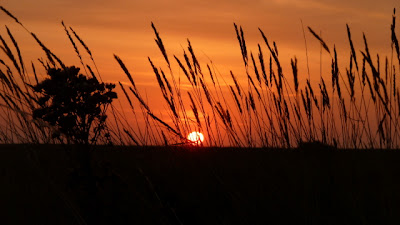 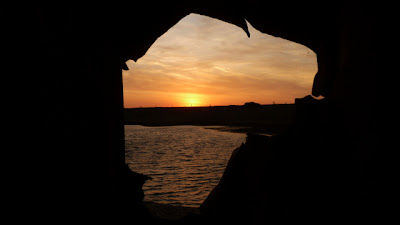 Posted by Pagham Birder at 8:36 AM No comments:

First thing this morning a Sparrow Hawk was sitting on one of the Nature reserve posts on the beach viewable from our living room window.  Even at that distance the eyes looked menacing!

A quick walk up to the Spit hide and I found it already occupied......by 5 Magpies (on top not inside! ) 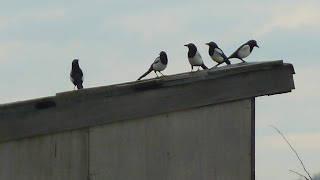 Later in the mornig when out for a stroll with a visitor (non birder) a Short Eared Owl flew up from  the beach adjacent to the Little Lagoon....a nice find and the second time  in the past 10 days or so.
Posted by Pagham Birder at 5:26 PM No comments:

Pagham Spit seemed a bit quiet this morning but later on a Stonechat put in an appearance and a  Wheatear visited our patio late in the afternoon.

So at 9.00am  it was another stroll around to the North Wall for a couple of hours ....I include some of the photos  below and it seems there is a watery theme running through this series!


Nothing very special but Pagham always has something to offer
Posted by Pagham Birder at 7:23 PM No comments:

A morning at Lavington Plantation

This morning dawned bright and sunny but with a considerable nip in the air. There was very little activity on Pagham Spit so prompted by some good images on the SOS and flickr websites  I made my way to Lavington Common. On meeting a couple of people with cameras I enquired if they were looking for Crossbills and having had no success myself looking on the common, I was told I had been in the wrong area...I needed  to go over the road into the plantation! It was not long before I heard the characteristic 'chip chip' call!!
I located a few Crossbills in a tall pine and then stumbled on a patch of rainwater in a cart track. Knowing that Crossbills drink frequently I positioned myself with the sun behind me and waited. It didn't take long for the action to start....not only Crossbills but Woodlarks were singing, Siskins flew in, Meadow Pipits bathed and a Raven was harrassed by Carrion Crows...and then a Buzzard landed in a nearby tree and spooked the lot!
A few images below...and a good morning.

Posted by Pagham Birder at 4:58 PM No comments:

The last few hours of the 'indian summer'

It was a superb morning and with a bad forecast for the rest of the week I felt a visit to  to the North Wall and Breech Pool was essential! I wasn't disappointed as the early morning light was great for a few photos.

Posted by Pagham Birder at 5:00 PM No comments:

Well, this morning was very similar to an airport...there were arrivals,there were departures and some birds were just in transit.
The arrivals were the Brents coming in off the sea, several small flocks of 20 or so from the Arctic.
6 Grey Herons were dots to start with but they headed for the harbour and eventually landed....from France possibly.

The departures included Swallows flying along the coast before crossing the English Channel on their way to Africa....and a Chiffchaff in our garden tree feeding up on insects before departure.

...and then there was a Black Redstart on the beach side of the bungalow...I dont know whether he was coming or going but it is always good to see a couple at this time of year on the beach.

There were Meadow Pipits and many Pied Wagtails going east today into the wind (it had gone round overnight) and finches everywhere....mostly Goldfinches, Greenfinches and Linnets but also some Siskins.

More surprisingly for Pagham Spit 19 Magpies arrived from the East...stayed a little while in the gorse and then headed off westwards....and then a Great Spotted Woodpecker flew over the harbour from Church Norton and continued on its way without stopping.

From the Spit hide there were 15 Little Egrets feeding just in front with a single Grey Heron.

...and all the while a local Kestrel was hovering over the pebbles searching for some morsel for its breakfast.


Posted by Pagham Birder at 4:19 PM No comments:

The Brents are arriving.

All day yesterday there was skein after skein of Brent Geese arriving off the sea - some coming into the harbour whilst others flew past heading for winter quarters further west. The size of most flocks was abour 20 birds but one larger flock numbered 82....a beautiful sight and sound as they 'chatted' to each other as they arrived!

Todays highlight was a Short Eared Owl flying over the car park and being harassed by a Peregrine...probably an inexperienced young bird, as it soon made off.

A single Wheatear present on the beach and a few Swallows flying west along the beach.
Posted by Pagham Birder at 11:07 AM No comments:

After a brief walk around the Spit at 7.30 a.m. I made my way to Burpham to try and find the long staying and very rare, Pallid Harrier. After much searching I met up with a very helpful birder who had been on previous occasions and had got a fairly clear idea of its hunting pattern. However, whilst I was with him him it didn't show and I decided to go on and trace the track he had mentioned. Less than 5 minutes later there it was quartering the fields...at some distance however and hardly photographable. Nevertheless I managed to get a few record shots and the one below is probably the best flight shot....at least it is a record (and a great life tick for me)

Posted by Pagham Birder at 1:52 PM No comments:

Another very warm start to this amazing October weather and today I joined a working party to commence clearance of the vegetation on Tern Island in Pagham Harbour. It was certainly hot work and we kept an eye on the tide to ensure we didn't get marrooned for hours on end! I guess next time (and there will be 3 or 4 sessions during the next few months) it will be considerably cooler...it was almost too hot and after 2 hours we had had enough.
23 Brent Geese were feeding not too far away and there  was a Black Redstart and a Ring Ouzel in the Church Norton churchyard....alas I didn't see either!

During the afternoon Swallows were flying west along the beach in considerable numbers.
Posted by Pagham Birder at 7:17 PM No comments:

Just arrived back from 2 weeks in Suffolk and a week in Norfolk....the weather has been too good for much migration but East Anglia never disappoints!

Back at Pagham there were 4 Wheatears on the spit today, 2 Rock Pipits on the tide line and a Chiffchaff in the apple tree. A very high tide produced few opportunities for wader watching as the saltings had  disappeared!

However heres a quick selection of some of the birds seen whilst on holiday.

Posted by Pagham Birder at 5:06 PM No comments: