Yet another visit to Arundel WWT!

This is the fourth attempt to track down and photograph the Firecrest that has been present for several weeks. Previous attempts have been totally unsuccessful or with mediocre results. Today, with good lighting and a couple of hours to spare together with the (hopefully)  right optics I might strike gold!
Shortly after arriving at the Trust I made my way to the bramble patch where I had located one previously and was very quickly rewarded with a distant sighting...too far away for a photo and in any case, moving at speed, in dense undergrowth! Here we go again, I thought but at least it was still here!
After waiting patiently for it to re-appear two familiar figures appeared both with 500mm lens....the duo, David ( of Fourth Groyne renown) and Martin. It was Martin who was desperate to get this bird!
We talked and got up to date with our adventures and then moved on to another different site...a 'possible' turned out to be a Goldcrest. Having almost given up and on the point of returning to the cafe we suddenly were aware of a couple of long lenses pointing to a bramble clump......yes, that's it!!
Much excitement followed!!
Many shutters clicking frantically at ten frames a second...many blurred images, many frames without a bird at all! The bird showed for a few seconds and soon disappeared,
Time for tea and cakes. On reviewing the images there were a few record shots and a couple or three acceptable images...but only one with the vital catchlight in the eye. Not bad...but could be better. Perhaps it calls for yet another visit when maybe that beautiful golden crown will be raised to achieve the perfect picture!

Thanks for the tea and cakes, Dave! 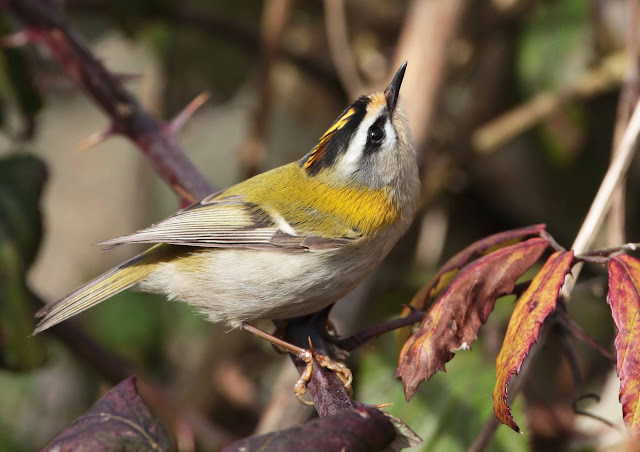 A cracking little bird....the smallest bird in Europe, even smaller than a Wren!
Posted by Pagham Birder at 7:49 PM No comments:

A visit to Warnham.

Having noted that a male Brambling had been photographed at this local Nature Reserve, yesterday I headed out on a bright sunny morning full of anticipation of getting a good close up shot. However I waited and waited and waited but I was not even rewarded with a fleeting glimpse of the bird let alone a photo! Most of the other usual birds were present but Redpolls were conspicuous by their absence and numbers of other species were well down on my previous visits last year. However here are a few shots of some of the birds present.


On the way home I stopped at Arundel WWT to get a better photo of the Firecrest...it was present but, as ever, flitting at great pace through the bushes and at a great distance...impossible bird!

A Goldfinch was much more obliging!

Posted by Pagham Birder at 11:58 AM No comments:

Sanderlings by the Yacht Club!

A miserable drizzly morning prevented any hope of taking the camera out...until a rather wet and bedraggled Mr Illman sauntered past during the morning and started making sign language from the beach that something interesting might be around and may make suitable 'blog fodder'! On venturing outside he told me he had come across a party of Sanderlings  down at the yacht club. It was still too miserable to set off  then and there so I waited until about 1.00pm to have a look. Sure enough, although they had moved away from the mangled remains of the look out point they were a little way along the beach towards Aldwick. The light was still dire and the birds looked tired but they are rarely seen on the beach so they were of interest for the blog...I don't think I have featured them here before. 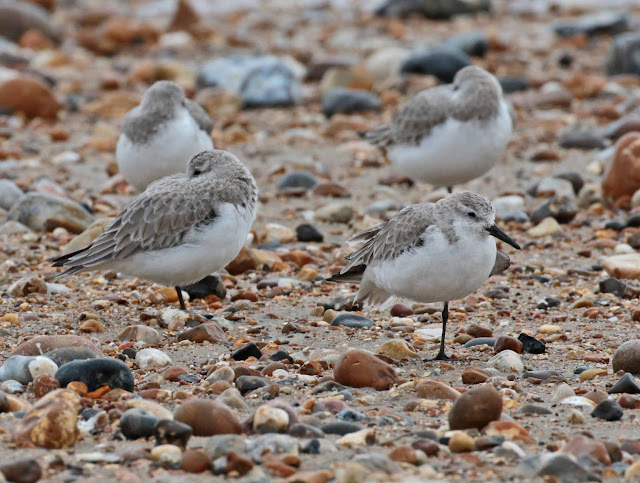 Anyway, thanks David for the info!

In mid afternoon the weather had improved very slightly so I decided to take the 400mm for a walk. High ISOs and big apertures were the order of the day. A few waders along the shore line...


...and lots of Mediterranean Gulls giving there unmistakable mewing flight calls....many taking on their spring plumage. 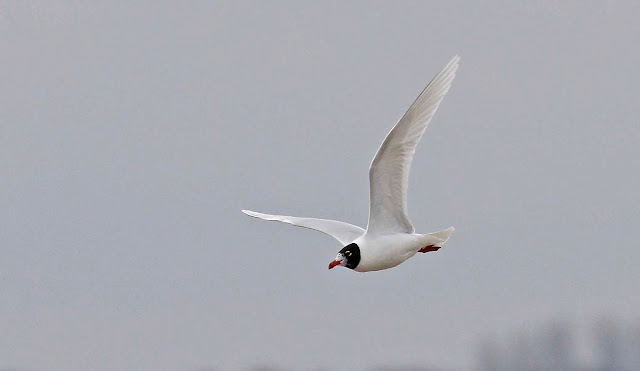 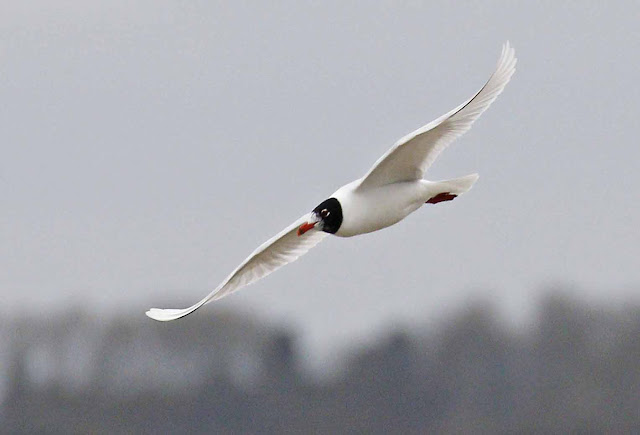 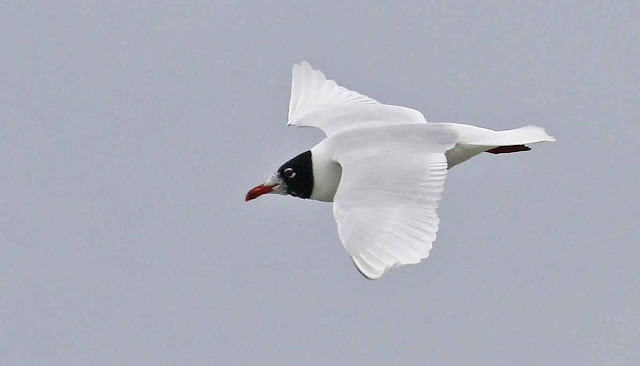 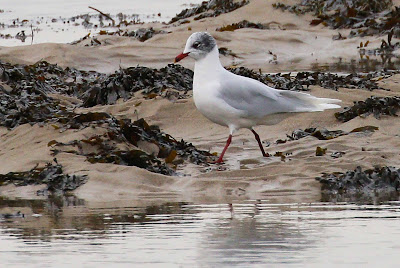 ...and then a Little Egret circled before landing not too far away from me. 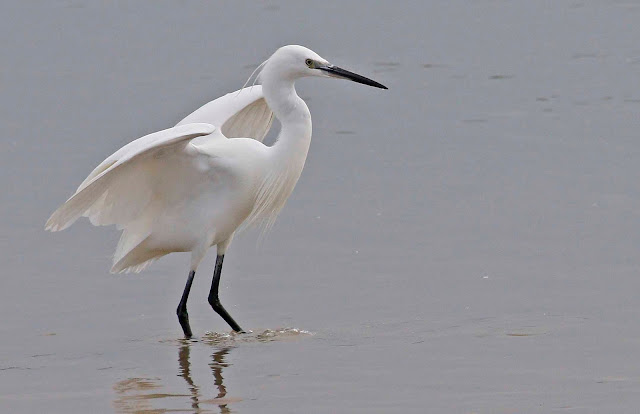 All white birds are never easy to photograph but there is just about sufficient detail in the highlights to make it acceptable....pity the light wasn't better!

Better weather and improved light is forecast for tomorrow...lets hope the weather men are right!
Posted by Pagham Birder at 7:16 PM No comments:

A bright,sunny,windless morning for a change!!

A wander along to the Breech Pool in the sunshine brought its rewards but the highlight was a high flying Spoonbill going west...unfortunately I spotted it too late to get even a record snap. The Golden Plovers looked resplendent in the sunshine and as they twisted and turned before alighting. They really are 'special'. 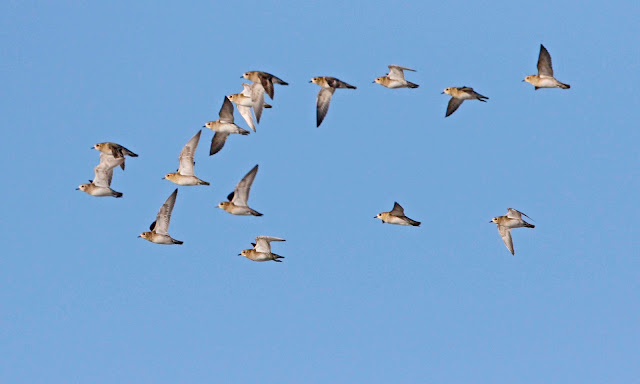 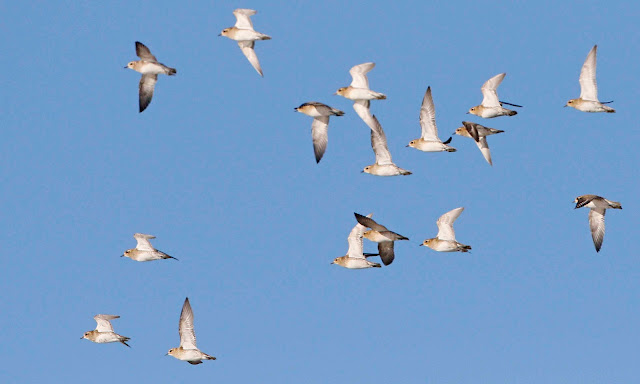 Another bird I can't resist photographing is the Stonechat and one has taken up residence in front of  the caravans for most of the winter... 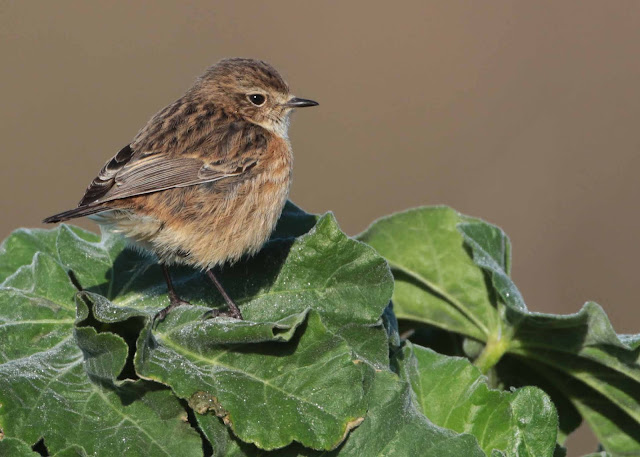 Great to hear more and more song as the days lengthen...

this Dunnock was particularly vocal this morning... 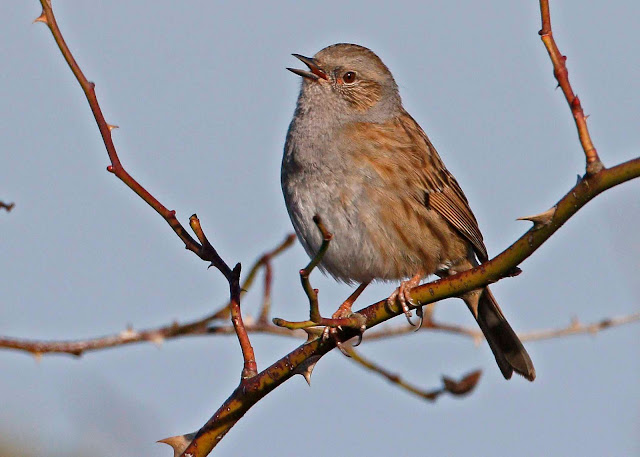 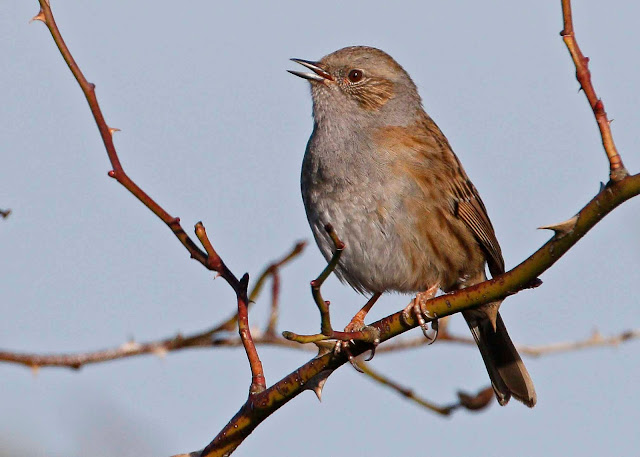 A Goldcrest was flitting about in a hawthorn near Slipe Field.. 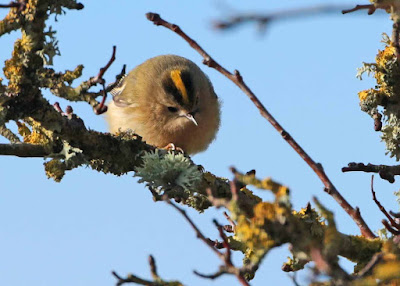 ...and finally a Rock Pipit 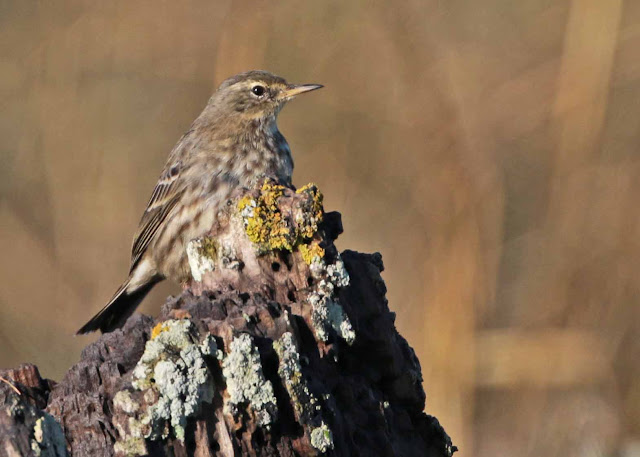