In search of Barnacles.

I set off to the North Wall early, as the reported Barnacle Geese were reported yesterday in Honer field and I had not caught up with several roving flocks noted recently. I had assumed these were feral geese but there now seems to be evidence that these  have been  genuine winter visitors dispersed as a result of bird flu in Svalbard. 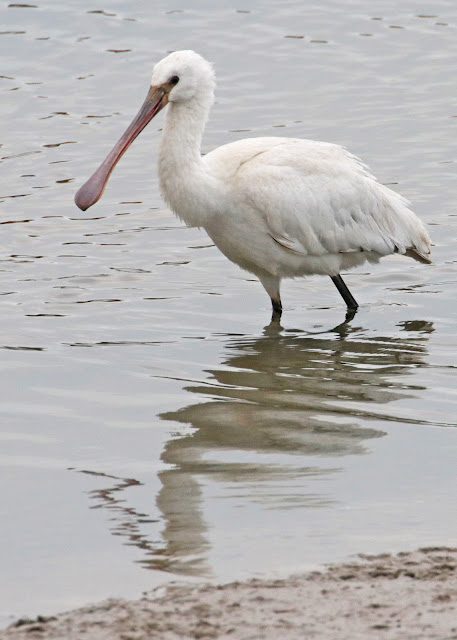 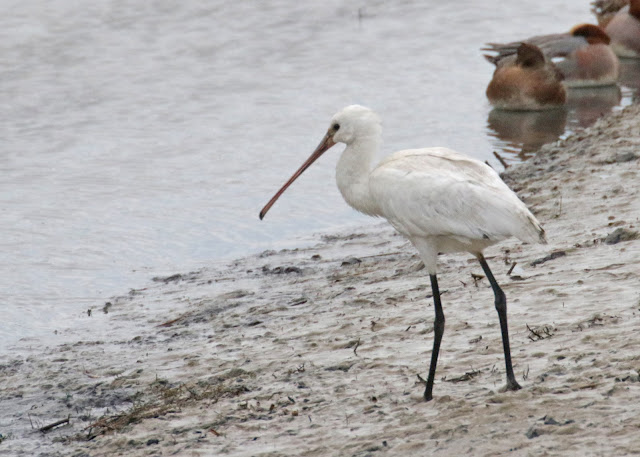 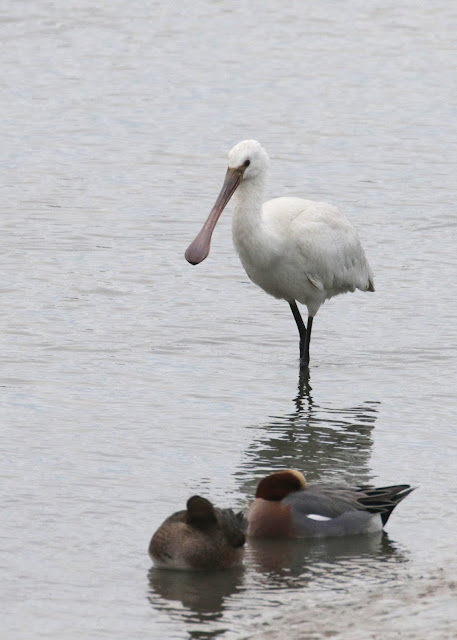 There was no sign of the Barnacle Geese in Honer fields with just 5 Brent Geese feeding in the field No. 3. However, having arrived at the Halsey farm fields, there they were, very well hidden and feeding in a trench but very difficult to view!

A Water Rail was doing his "squealy pig" yell and a Cettis Warbler was calling. A huge flock of Lapwings circled overhead together with smaller flocks of Golden Plover. With Curlews feeding in the fields and hundreds of Wigeon and Teal in the harbour this all added up to  creating a tremendous atmosphere on a rather dull and dreary December morning.
Posted by Pagham Birder at 11:08 AM No comments:

One or two oddities.

The Spoonbill was at the back of Breach Pool again this morning. 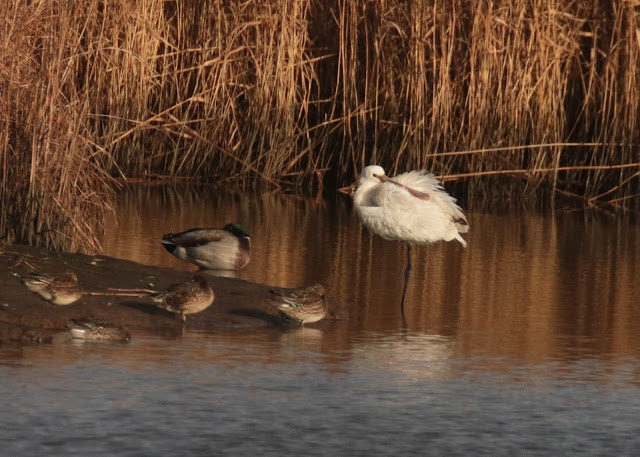 Showing off his spoon bill..... 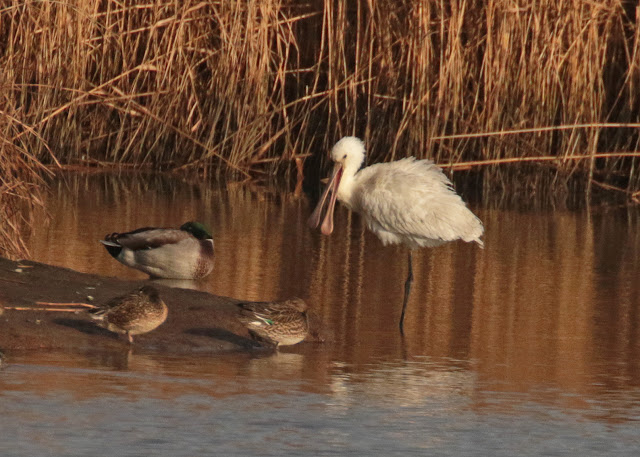 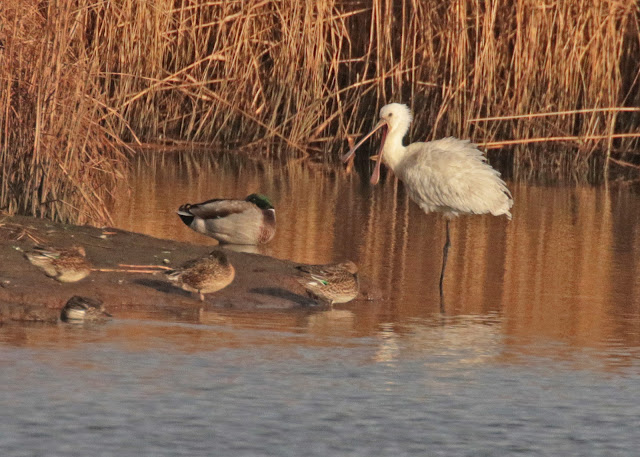 ...and so back to his usual sleeping position. 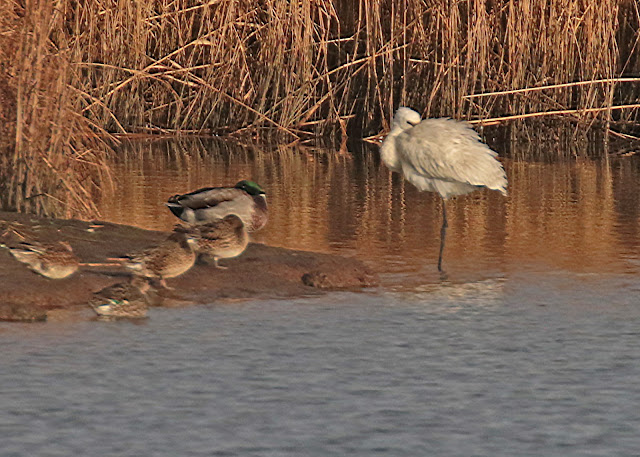 Nevertheless appreciated by a number of passing birders. 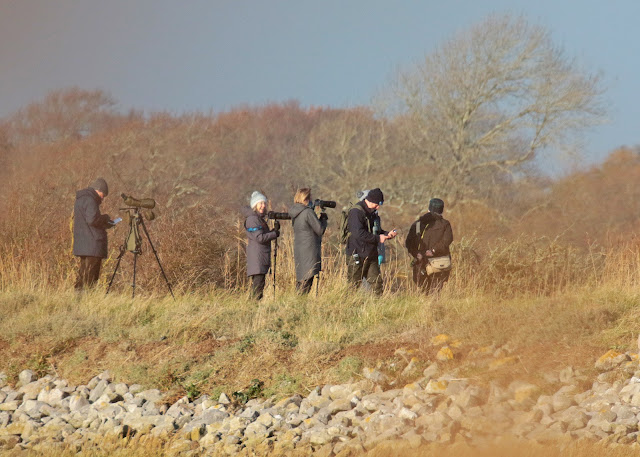 I'm not certain why this white dove was resting on the side of the rife but it flew off strongly after this shot. 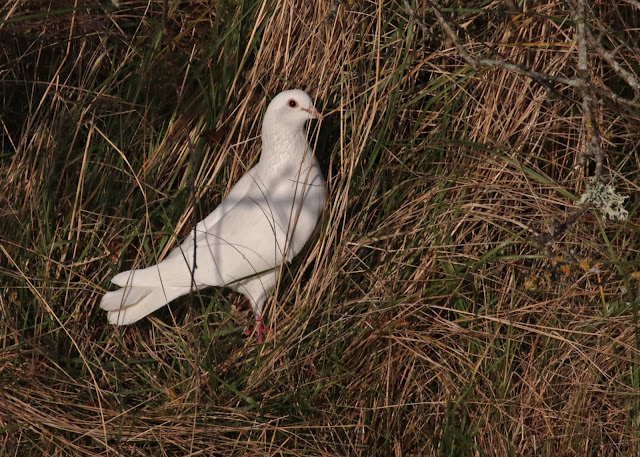 This lone Little Egret was feeding along the dog path adjacent to Slipe field. I've never come across one of these along here before. 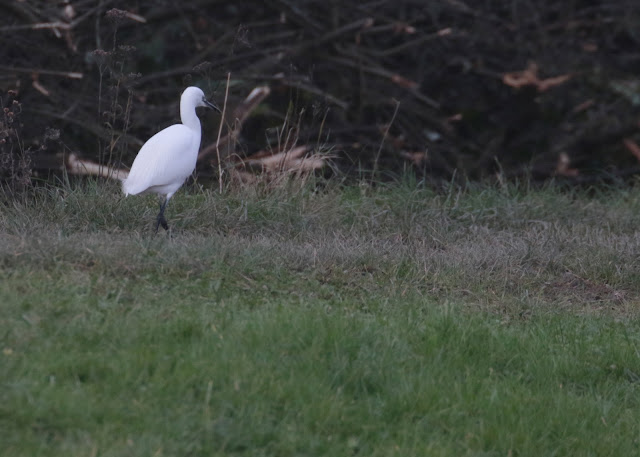 Earlier in the week we had an influx of Blackbirds in the garden and I was struck by this particularly dark individual with black beak. Never quite certain whether these birds are of German/European origin or first winter males but whatever, it looked very different from its companions. 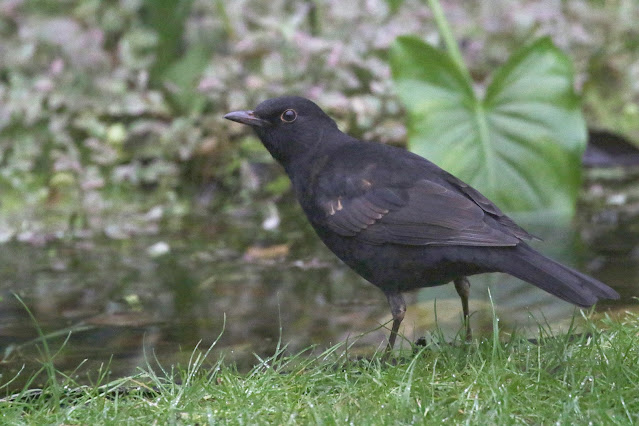 Oddly, there was a single Redwing in attendance and I can't remember seeing one of these in the garden for some time and never singly and usually flyover flocks. 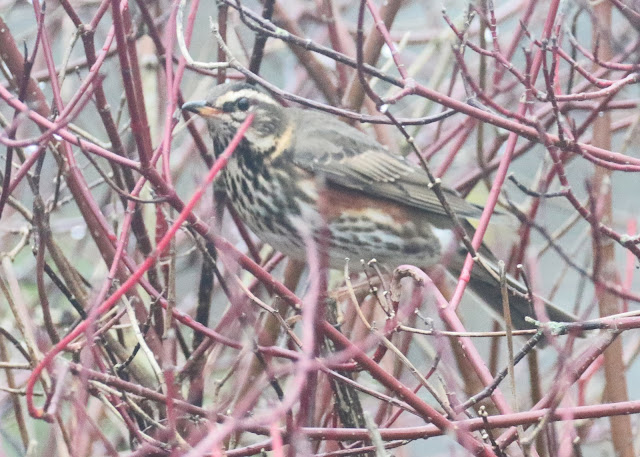 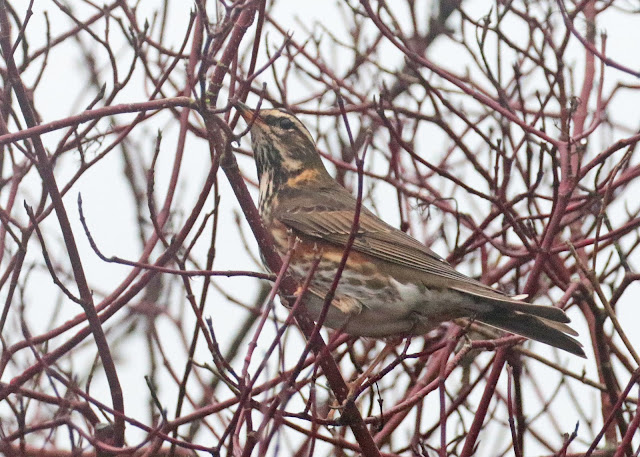 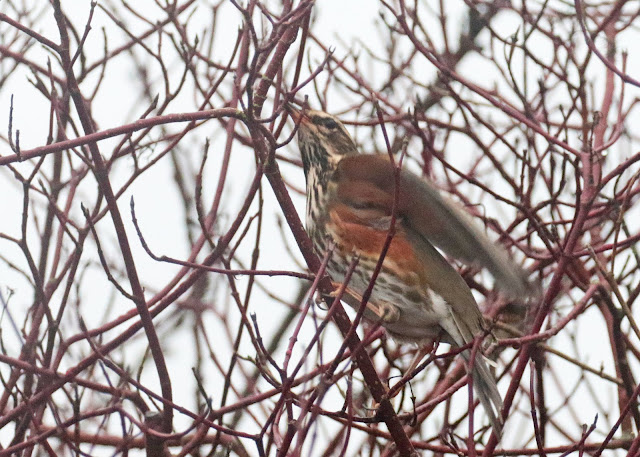 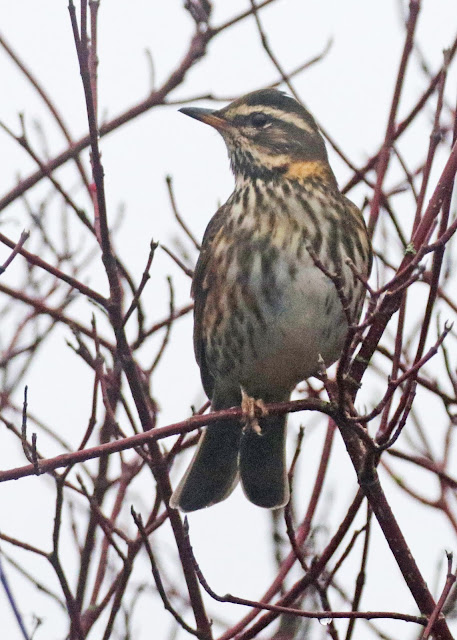 Nice bird though, photographed through the double glazed window.
Posted by Pagham Birder at 6:41 PM No comments:

A cool but windless morning on Pagham spit this morning. 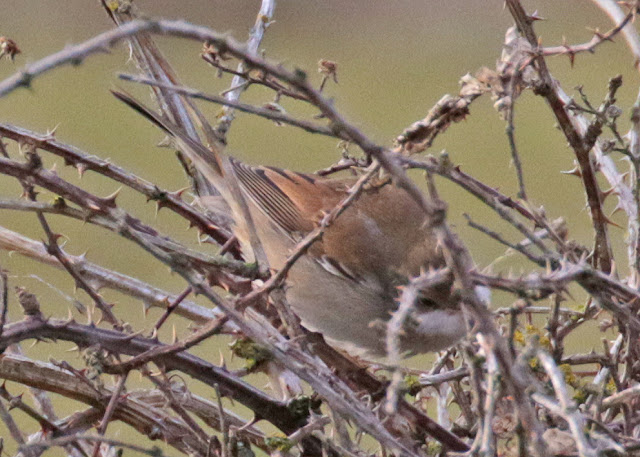 As I was approaching the harbour entrance I noticed a couple of female House Sparrows in the last bramble patch but took little notice until I glimpsed another small warbler like bird accompanying them. I thought it looked Whitethroat like but dismissed it because it was December and it should have migrated weeks ago! However I took one shot of it before it disappeared towards the harbour wall and was lost to sight. After a short search I decided it had flown across the harbour and thought no more about it. However, when later I was looking at my photos I found the above very poor record shot but it was just sufficient to confirm that it was indeed a Whitethroat. Surely this is an exceptionally late record. Comments anyone?
I continued my wander around the spit and for the record  took a few photos. 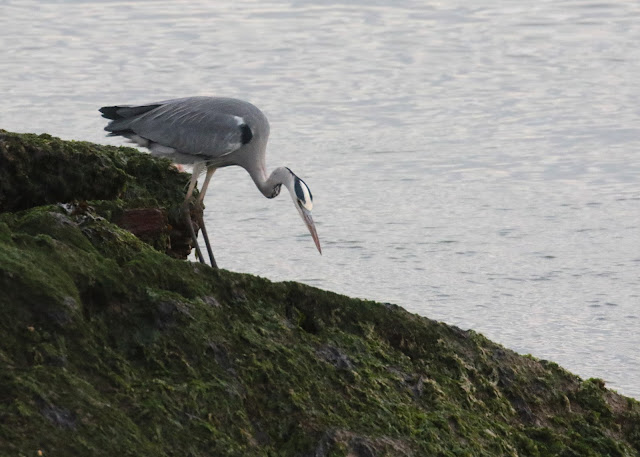 A Grey Heron was cautiously approaching a suitable fishing spot. 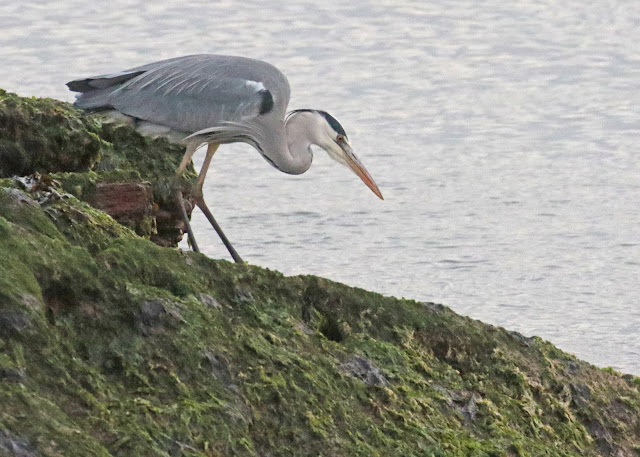 Flocks of Brent were commuting from the shoreline to the harbour 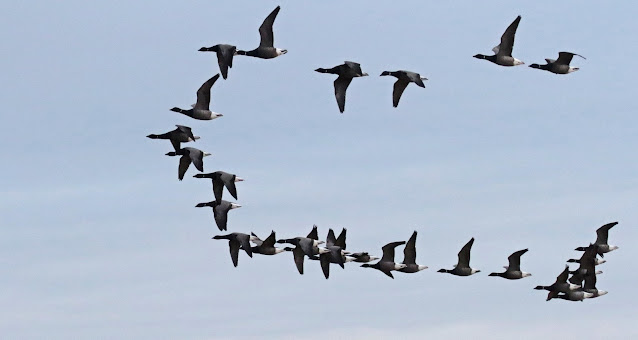 The Goosanders were fishing near the old Little Lagoon. I've noticed that Black Headed Gulls very often hang around them, hoping to pinch a snack.

However the regular dog walkers do disturb them rather frequently and they make off but will often return to fish in peace in 'their' spot. 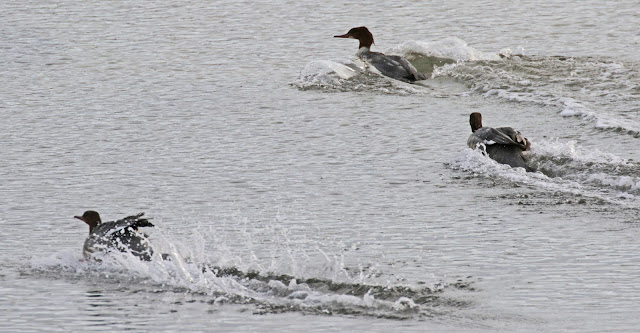 I love Stonechats...they are so photogenic and there are currently two pairs on the spit. 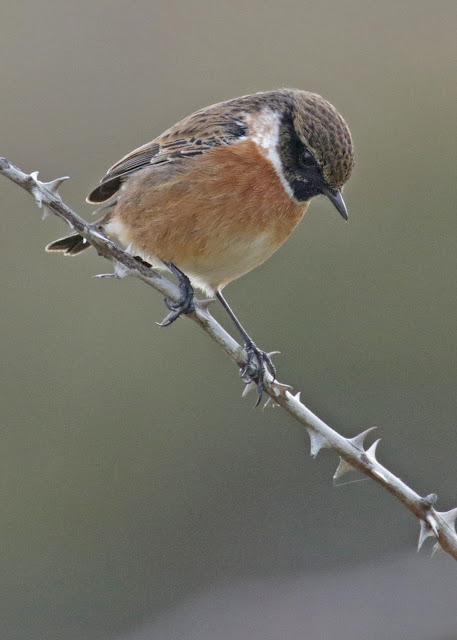 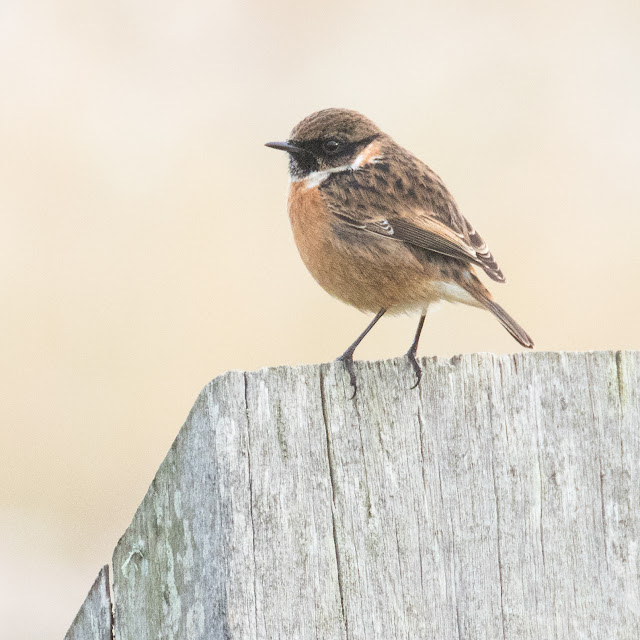 There was a huge flock of Brents  seen towards the North Wall.
I checked that the female Goldeneye was still on the Lagoon and flushed a Mistle Thrush from a nearby bush (very unusual for here) 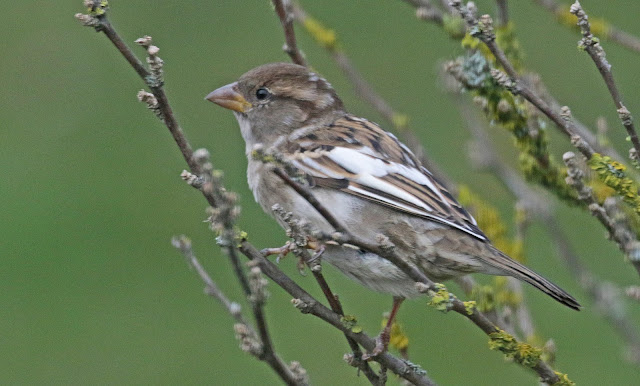 Back in the garden on the beach a leucistic House Sparrow (f) was waiting for a vacancy on the bird table.
You never know what's going to turn up at Pagham!
Posted by Pagham Birder at 6:12 PM No comments:

I paid a very quick visit on this very cold and frosty morning to check if the reported Spoonbill was still around. There was no sign initially but within twenty minutes the bird flew into the Breach Pool and landed by the nearside bank partially hidden by the reeds. Photography was tricky but it emerged sufficiently to obtain this photo before taking off and flying further along the pool. 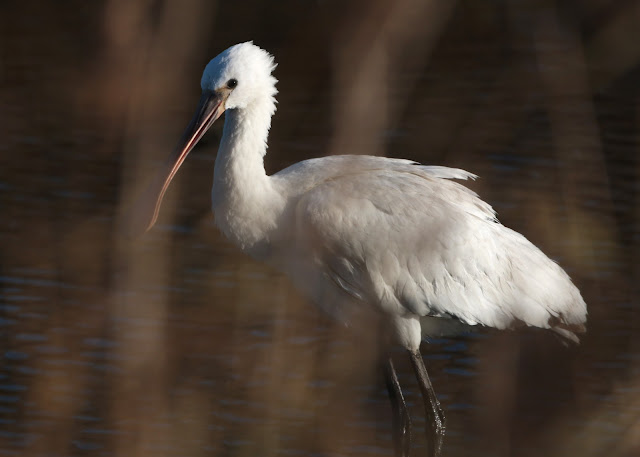 It was now further away but it was easier to obtain an uncluttered view! 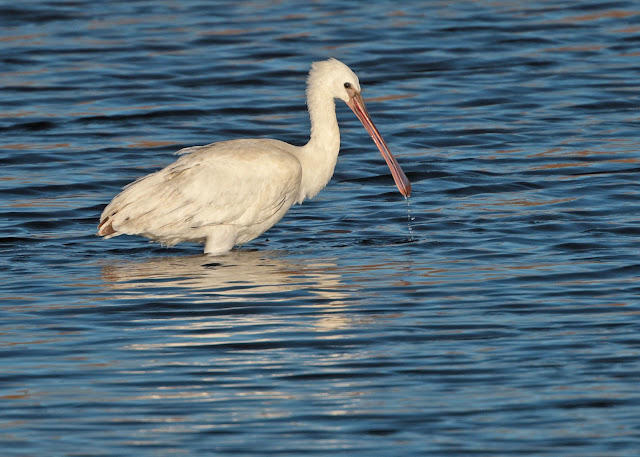 During this time other birders were endeavouring to make a snipe into a Jack but in the end decided it was a common. A few minutes later a Jack Snipe did fly over showing the characteristic shorter bill. At the same time another birder had spotted what he felt sure was a Bearded Tit but it never showed itself at the time.
Later at 1.35 a Whats App report showed 'Bearded Tit at north wall!
Great!!!
Posted by Pagham Birder at 5:26 PM No comments: