Ospreys...I missed the one reported over the harbour Sunday!

Quiet on the Spit this morning and only B T Godwits, Redshanks and 3 Snipe on Breech Pool and no sign of the Glossy that has turned up again, so I needed a boost and decided on Thorney. Certainly two Ospreys (maybe three) and a very pale Buzzard but quite distant for any decent shots but here are a few long distance heavily cropped flight shots just to prove they were there! 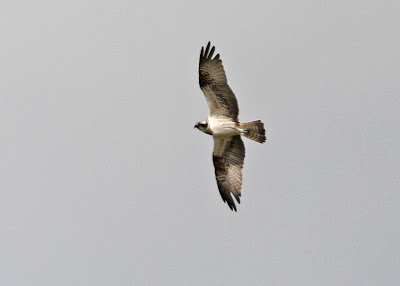 ...it was NOT plunge diving!
Posted by Pagham Birder at 2:12 PM No comments:

This time it was to look at and photograph the Wood Sandpiper reported on the  S.O.S. web site yesterday. Alas....no joy.

A Curlew obliged in the saltmarsh...

...and a variety of geese showed up on the Breech Pool.
Besides the Canada Geese....a Barnacle Goose, a Grey Lag Goose and the pale faced  Canada

The Ruff (or is it a Reeve) was feeding in the pool once the water level had dropped sufficiently. 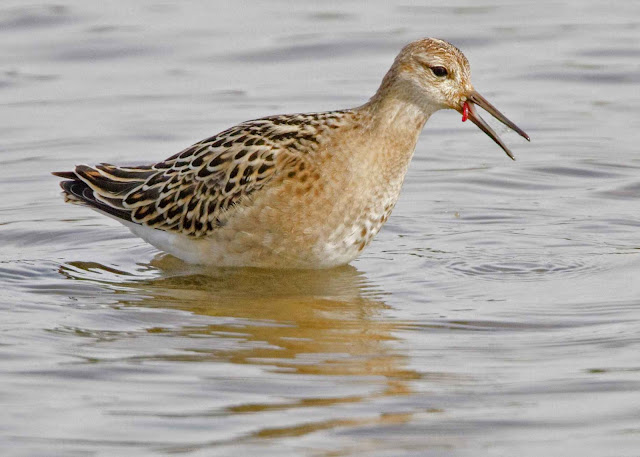 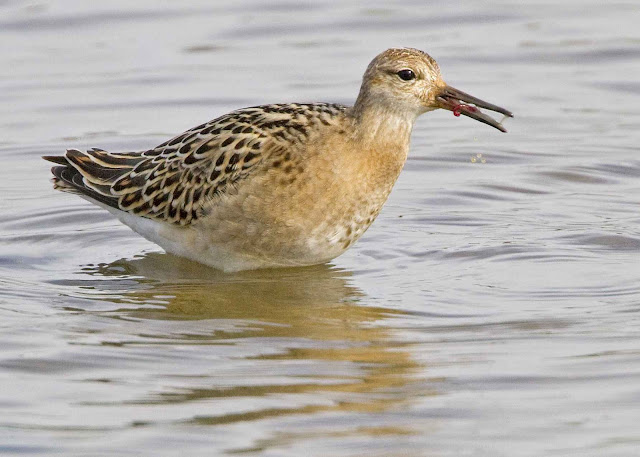 Four Greenshanks, 2 Spotted Redshanks and a Common Sandpiper joined the Redshanks in the main channel extending to Whites Creek....we await the Curlew Sandpipers!
Posted by Pagham Birder at 2:02 PM No comments:

A brief early morning visit  to Breech Pool to see if anything interesting had turned up resulted in little excitement but as always there is usually plenty to see and enjoy! 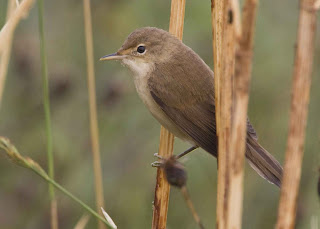 Reed Warblers were again much in evidence and a Cettis called from the sluice gate area but as usual kept well hidden. 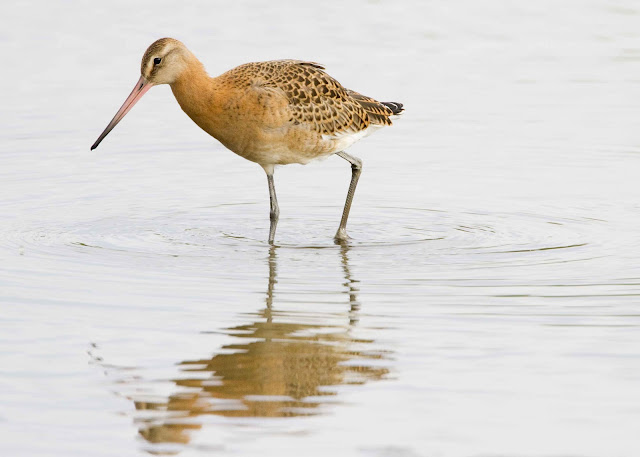 Black Tailed Godwits were enjoying the shallow water of the pool ....but the star of the show had to be a single Ruff feeding alongside but frequently preening. (See Flickr) 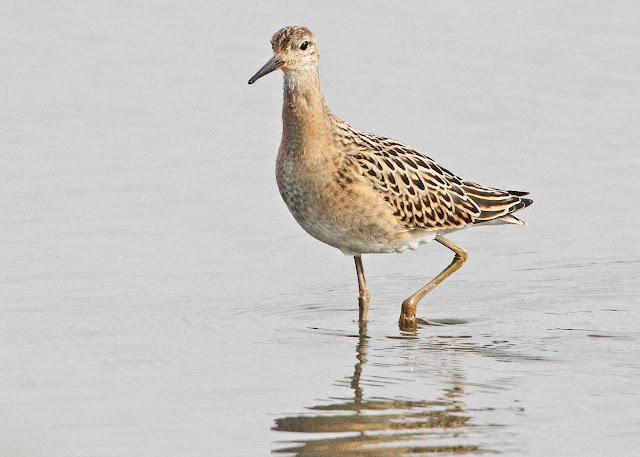 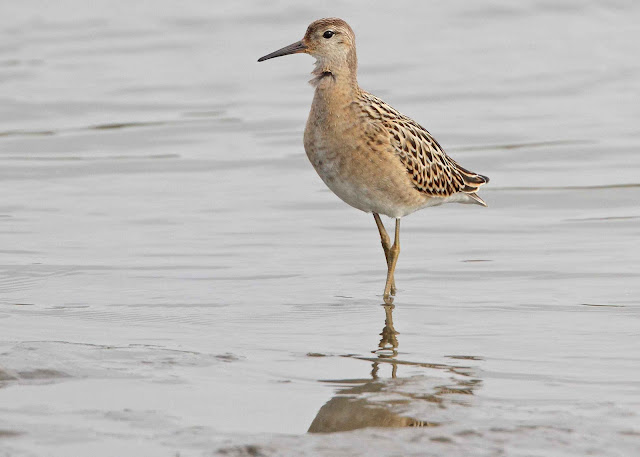 It was a pleasant hour simply enjoying the peace and quiet and trying to capture a few images of the varying bird life!

Here are couple of shots of the ever present Egrets...

Posted by Pagham Birder at 7:20 PM No comments:

An early recce of the Spit produced just 4 Willow Warblers plus the usual Linnets and Greenfinches in the gorse but high overhead going westwards, was  a flock of Sand Martins...had it not been for their calls I would not have noticed them.... a little later about 30 House Martins and 20 Swallows flew low over the Lagoon. The tide was coming in and Grey Plovers, Curlews, Oystercatchers plus a few Dunlin were feeding on the mud but I knew that by the time of the RSPB/Friends of Pagham Harbour walk started the mud would be covered and most waders gone to their high tide roost.

Then at about 10.00am my neighbour shouted 'the car park is open'! 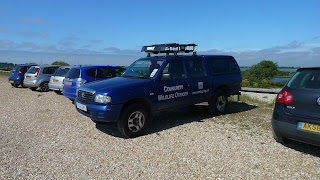 I told them it was not open to all!! 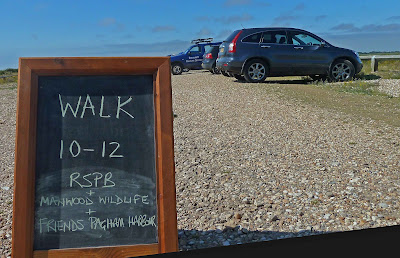 As the members spilled out they made their way to the Lagoon after an  introduction by Bill Martin from the 'friends'   he and Sarah Hughes, the Community Wildlife Officer led the group for a very interesting walk around the Lagoon and onto the Spit.

The weather was superb but despite  bird life being a bit thin on the ground everyone enjoyed the walk..


Distant views of a few of the birds noted.


Posted by Pagham Birder at 1:47 PM No comments:

A familiar spot to regular visitors to Breech Pool....and the ever present farmyard geese!

...but my main purpose was to capture a few shots of Reed Warblers before their return and I was pleased to find two pairs feeding youngsters. 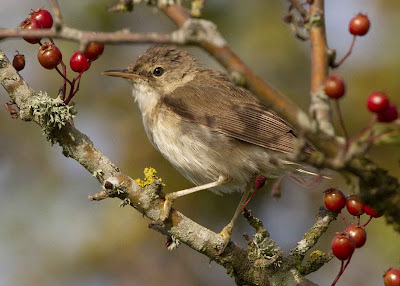 Difficult to photograph because of the habitat....dense reeds!  However a nice record to look back  on, on a cold winters evening!


Nothing special but a superb warm, quiet  and windless morning...people and dog free!
Posted by Pagham Birder at 8:36 PM No comments:

Pagham Spit always surprises! Some mornings it is alive with birds....Linnets, Greenfinches, Waders, Peregrines, Migrants. Other mornings are sometimes, but, rarely, dead. This morning was in the latter category. A lone Little Egret was fishing in the Little Lagoon but the bushes held nothing. A single female Wheatear on the beach and that was it!


During the morning I heard the flight call of Green Sandpipers and five flew in from the sea quite high overhead and during  late morning  four Swifts flew west.
*****************
I was pleased to note that some kindly soul had cleared the rubbish from the hide mentioned in my previous blog. Thank you whoever you are.
Posted by Pagham Birder at 6:48 PM No comments:

It makes you spit!

This is the third morning this week that I have been greeted by this site in the Spit Hide. I have cleared it up on both mornings and had words with the youngsters  responsible on the first occasion when  I caught up with them but obviously this has had little effect. Perhaps the hide should be locked during the summer holidays...it always used to be but it seems a shame for visiting bird watchers to deny them the facility.

This is one of three in our silver birch this morning but there were a few more on the spit plus a Whitethroat, 2 Common Sandpipers on the Lagoon and a juvenile Peregrine murdering an unidentifiable bird at some distance on the Church Norton spit as it cried for mercy! Several parties of Swallows flew west during the day plus a singfle Swift.
Posted by Pagham Birder at 8:58 PM No comments:

The coast is an exception...its usally the other way round!

After a fine start with  a few Willow Warblers and a Wheatear arriving overnight the sea fret rolled in at mid-day and the afternoon turned misty and quite cool. Most of the country enjoyed warm sun...not so Pagham. Here's hoping for a better tomorrow.
Posted by Pagham Birder at 7:57 PM No comments:

The morning started looking dull and uninviting and a visit to the Spit hide was fruitless. As the morning improved I was attracted by the numerous Starlings visiting the fat balls on the bird table so decided to give the camera an  'airing' and captured a few of the Sturnus Vulgarae in various states of plumage. 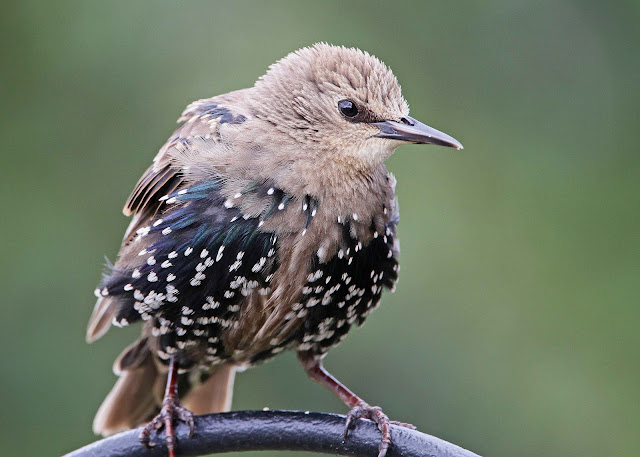 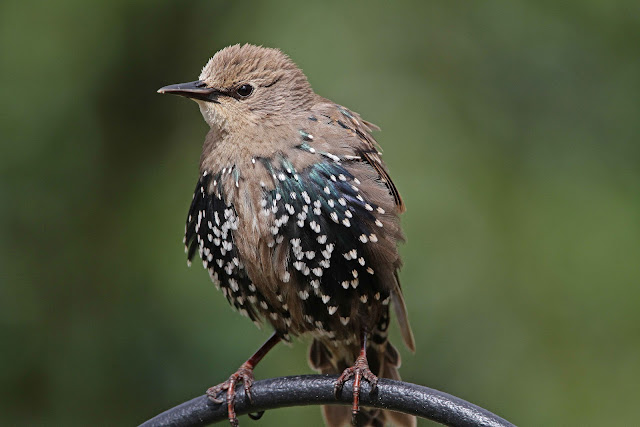 Although they may be very common they are querky birds and quite attractive when seen at close quarters.

Late morning and the weather improved  so took a trip to Breech Pool to look for waders. As I arrived I could see the familiar figure of Dave Potter hunched over his '500' and not so far away a Green Sandpiper posing for him.  As usual, I didn't have my camera so decided to return home, grab the camera and within 20 minutes returned to the spot...sandpiper gone! (It was alleged that I  spooked it as I made off ) However the bird did return for a short while and I was able to get a few very quick shots before it flew off again and then remained out of distance for the next couple of hours.
Here are my efforts...I just hope Dave enjoyed the quality time prior to my arrival and got some cracking piccys! 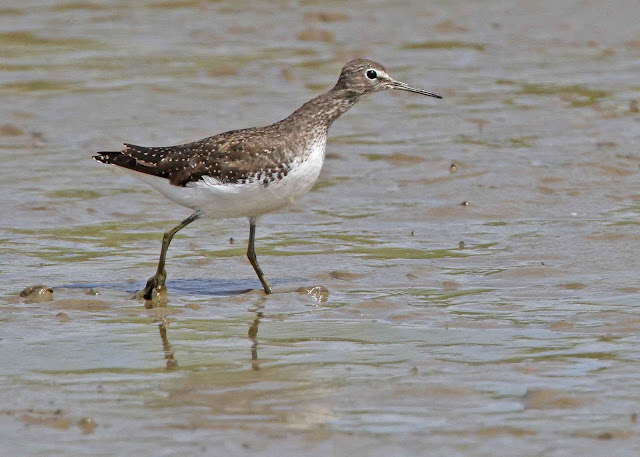 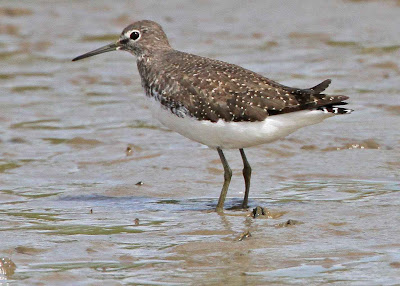 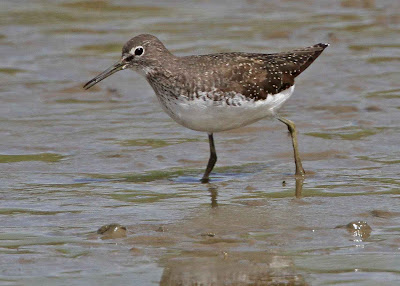 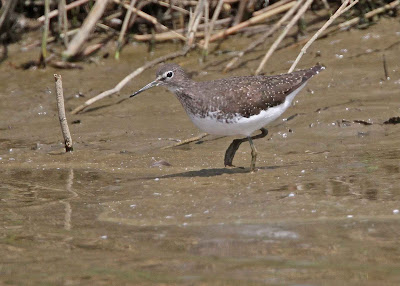 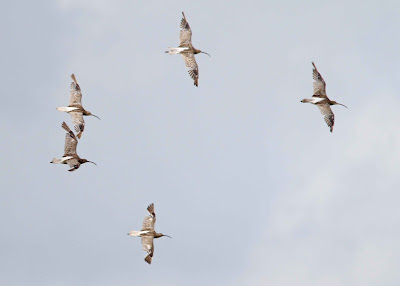 Very little else showed up but a small flock of Curlews flew over and 2 Spotted Redshanks were present. Although very distant the Spotted really stood out and this very cropped shot shows how  distinctive this bird is, when seen with its cousins.

Posted by Pagham Birder at 4:44 PM No comments: