..I expected some surprises with Pagham Spit teeming with rare vagrants but alas this was not to be!
Nevertheless there were plenty of  'the usual'. The early morning light was just perfect for some camera work so a wander up to the hide was a must.
A Curlew was feeding in the salt marsh and allowed a fairly close approach...they are usually a bit jumpy when approaching so this was a good opportunity to obtain a few shots.
As I approached the hide I was aware of a flock of Meadow Pipits feeding along the tide line. These are very often understated birds but in the early morning sunshine...WOW! 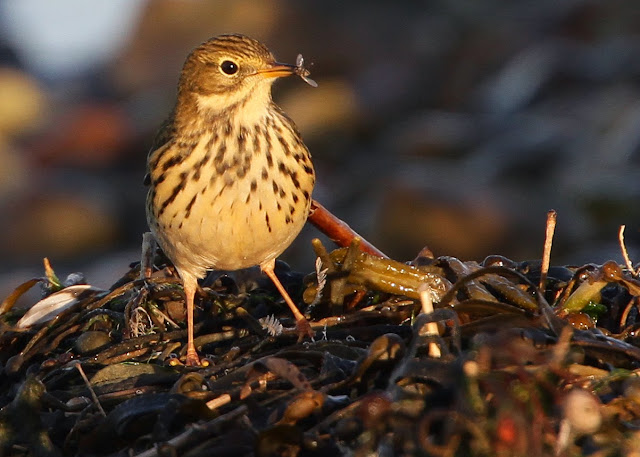 I then met Tim, on holiday from Bedfordshire and amongst things discussed the merits of Pagham and he encouraged me to keep this blog going as he said he was a regular reader! (Someone reads it!! )
As I returned for a coffee I took a few more photos of our common residents and realised how often I just pass these by without a second look..


Sun still shining at 9.30 am so off to the North Wall... after a cool start the warmth of the sun could be felt and a Wood Pigeon was actually sun bathing in the horse field by the Salthouse.
I continued along the North Wall and noted  the Canada Geese were still accompanied by the Barnacle  Goose together with a few hybrids.A Buzzard was feeding at the back of Honer field and a Kestrel flew by and then...highlight of the morning...a Marsh Harrier quartering the reed bed...a bit distant but still nice to see. (too distant for even a record shot! )

Time to return but a brief stop at the sluice gate to have a last look.

Posted by Pagham Birder at 2:55 PM No comments:

..but still a nice bird.

We have probably got more House Sparrows visiting our bird table than for the past 15/20 years and the Sparrow Hawks know it! This fine male dropped in this morning and just perched on the various feeders...waiting!


Saw my first Merlin of the Autumn yesterday going for Linnets over the Spit.


Winds of 70/80 MPH forecast during the next 48 hours....and  the rocks for the revetment are due from Norway...sometime! Had a vague note from Arun District Council yesterday....lets hope its not too late!

The Peregrine was back at  'his usual spot' on New Island after an absence of a few days....

A Sparrow Hawk flew over the Little Lagoon and took either a Linnet or Greenfinch...it happened so quickly I couldn't be sure.

A Stonechat which arrived at the end of last week and proved very obliging and actually flew closer and closer towards me as I photographed him...and he was in excellent plumage! 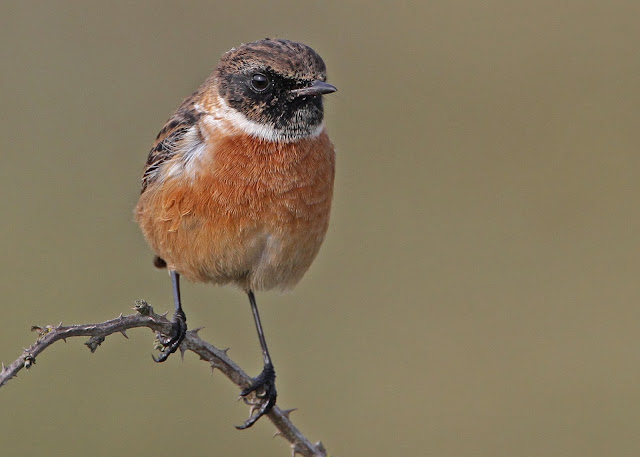 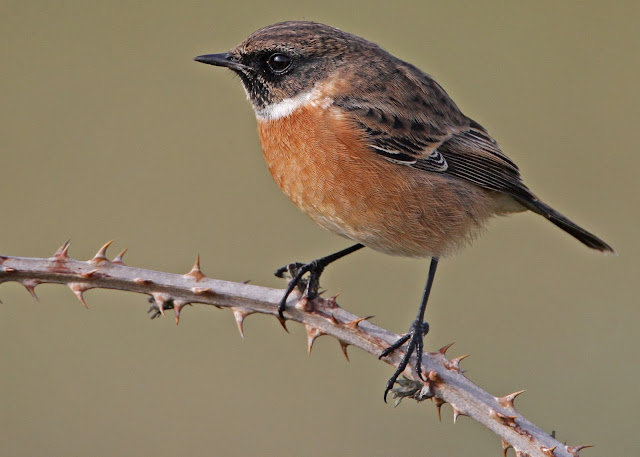 Posted by Pagham Birder at 7:58 PM No comments:

After a wet morning I ventured out onto the Spit and found a Stonechat on the metalwork of the 'old' harbour entrance and  as I only had my compact with me, got a shot  'just for the record'! A couple of Wheatears were present on the track from the old car park and as I was watching the high tide, a couple more turned up on the beach. On the off shore spit there were half a dozen Med Gulls alongside the Turnstones. 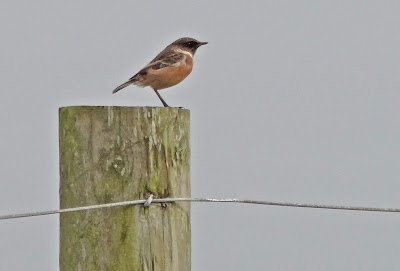 Talking about the high tide the sea was pounding in and eating ever closer to the beach bungalows!

....but there is better news and I understand that work is soon to begin on installing the rock revetment and I noticed that the yacht club car park had being caged off and a vehicle had just unloaded several  rolls of heavy duty liner. 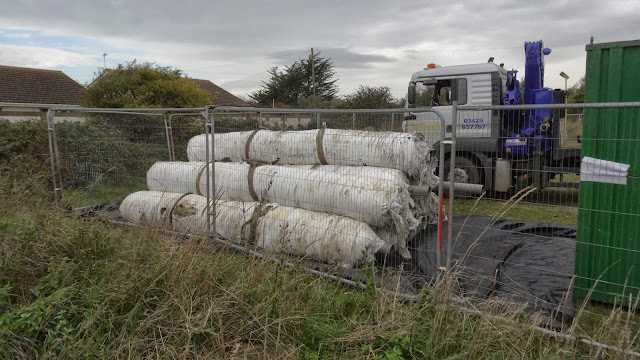 On walking back along the beach I was interested to see a bungalow is being demolished but the original railway coaches have been exposed and will hopefully be preserved...shame the exterior windows have been replaced. 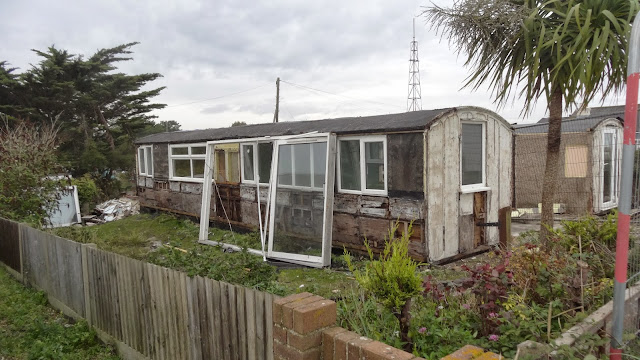 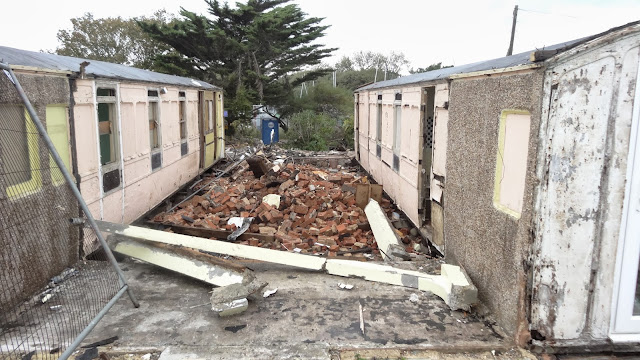 Although this is strictly a blog about the birds of Pagham Spit I will include photographs of the ongoing work relating to the  beach erosion protection as I believe it will be interesting as and when it occurs....so watch this space!
Posted by Pagham Birder at 3:57 PM No comments:

This was the sight that greeted me this morning at just after 7.30. A dull overcast morning with very poor light but as the camera was' at the ready' for a twitch to record a Semi Palmated Plover reported on Hayling Island I wasted no time. It was poor....f5.6 at1/125 with ISO 6400! Coupled with the fact it was through a dirty double glazed window it was not that bad...quite bad but a record! The House Sparrow didn't think much of it either and just as the numbers are building up again....shame!

Out on the Spit a single Wheatear and 3 Chiffchaff....a few Gannets off shore, Brents still coming in, in small parties plus a few Med Gulls.

ps...Never got to Hayling so dipped out there!
Posted by Pagham Birder at 5:14 PM No comments:

A pair of Wheatears were present last night on the Spit but I could only locate this, quite confiding bird this morning. The summer visitors are certainly thinning out now and although there were three Swallows over the Lagoon I noted nothing else of note except perhaps six Meadow Pipits on the beach.
Conversely the number of winter visitors are  building up with Brents spread right throughout the harbour and Teal,  Wigeon growing in numbers plus and a few Pintail. Several Clouded Yellows on the Ragwort.. 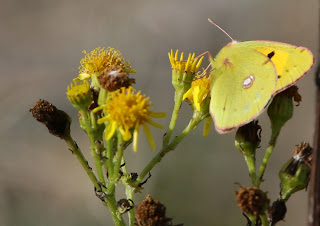 Earlier in the day I paid my third visit to Cissbury Ring in search of Ring Ouzels  but it was all in vain and I have probably dipped out this year! Three House Martins and an obliging Kestrel was my sum total! 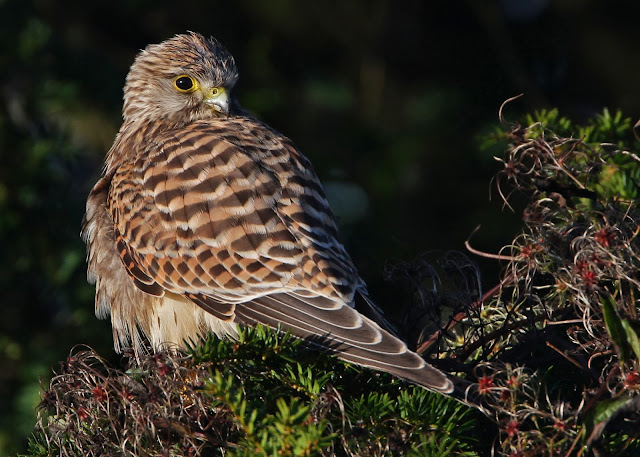 Posted by Pagham Birder at 2:53 PM No comments:


Its always good to return to base on Pagham Beach after a time away. Good to see that the Brent Geese are returning with a number of young birds; looks as if they have had a successful breeding season in the Arctic. Good to see the Spit hide has been cleaned out and is useable again. Good to see that we have not been washed away despite work on the promised rock revetment has not begun.
So, having noted all the 'special' birds I have missed (i.e. Great White Egret, Rose Coloured Starling, Jack Snipe etc.) I wandered along the North Wall to see if I could catch up with the Ring Ouzel reported on Saturday. I was joined by Peter C and together we searched in vain...plenty of Blackbirds and a couple of Song Thrushes but alas no Ouzels despite hundreds being seen earlier last week in the east of the county.

Rather than coming back with no photos I took a couple of shots of the regular species but nothing unusual....


Posted by Pagham Birder at 1:58 PM No comments: