This bird is becoming a regular visitor and continues to amuse! 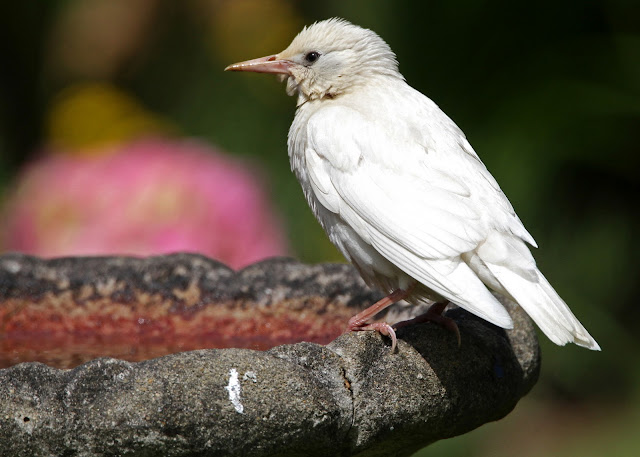 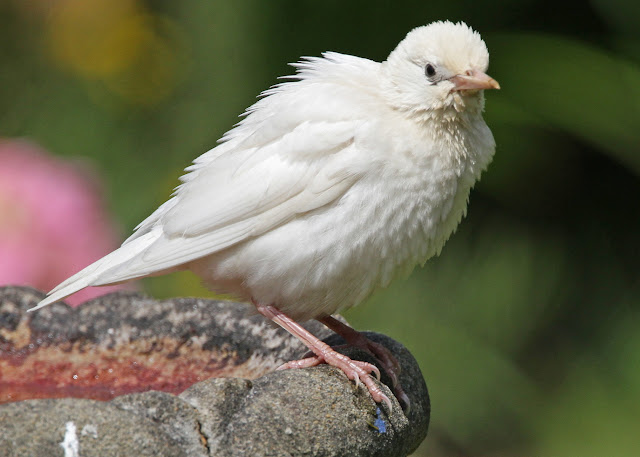 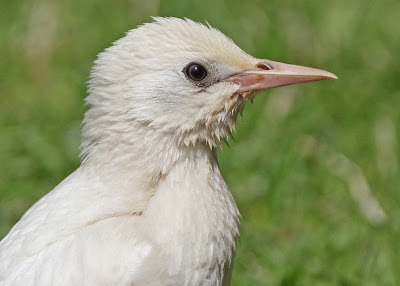 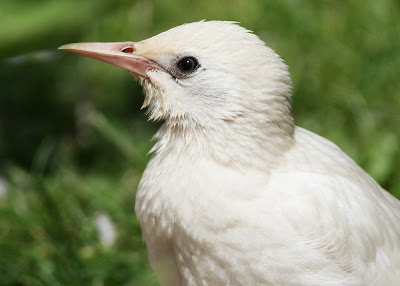 I get the impression that Starlings have had a successful breeding season judging by the growing flocks that are descending on the beach and the constant fighting and bickering on our bird table!
Posted by Pagham Birder at 3:48 PM No comments: Links to this post

An early breakfast with a treat...an unexpected visitor on the feeders... an all white Starling and as it had pinkish beak and legs I believe the bird is a true albino. 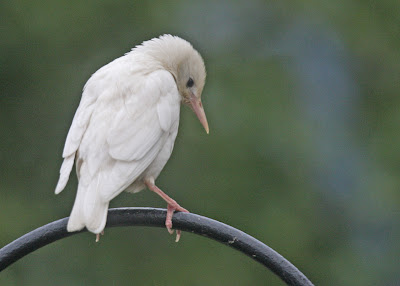 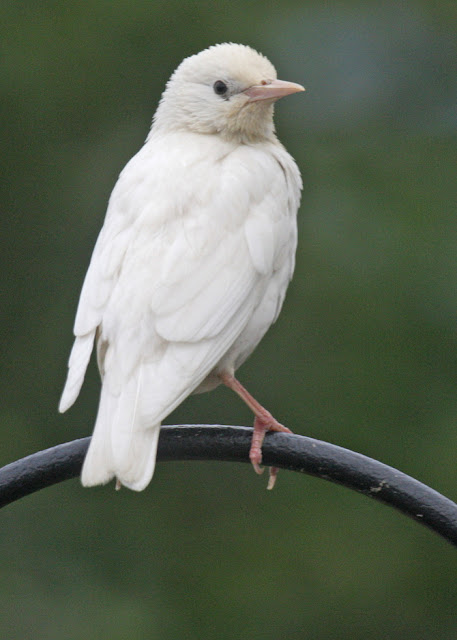 The second  'first' for the bird table was a Great Spotted Woodpecker....never in 28 years have we had a GSW on our fat balls! It is not a beach bird!

As it was an unusually calm, windless morning I decided to set out to the North Wall and by 7.30 was at the Salt House. Reed and Sedge Warblers were very active but with the water level still quite high,  there were no waders. 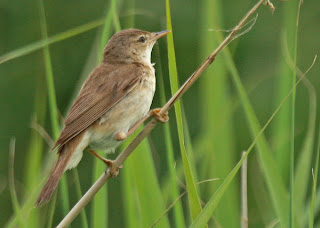 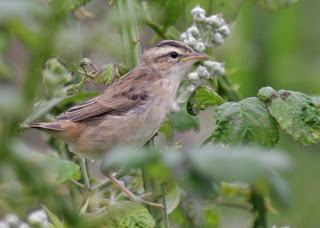 A young Little Grebe was  in the rife being fed by its parent, a Mallard with youngsters, a few coot, a Great Crested Grebe and  Tufted Ducks but little else on Breech Pool except a Common Tern on its now usual fence post.


Further along the Little Egrets were gurgling in the hawthorns and a Skylark flew into the long grassy field of  Halsey Farm. I returned to the seat by the salt house having seen only one other person and for a few moments enjoyed the peace and quiet whilst a Goldcrest fed above me in the sycamore tree and a Greenfinch gathered feathers for its nest.
It sounds blissful, does it not! 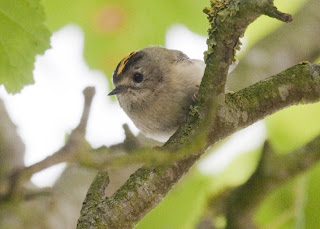 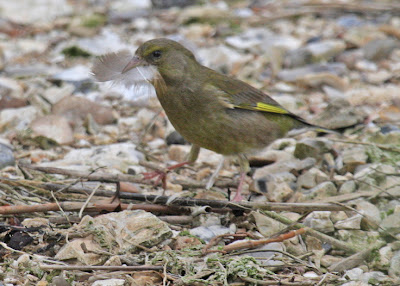 Posted by Pagham Birder at 6:42 PM No comments: Links to this post

At last a proper summers day.

An adult Greater Spotted Woodpecker alighted on a telegraph pole in West Front Road this morning at 7.30am...not a bird often seen on the beach,  presumably part of  post breeding dispersal. 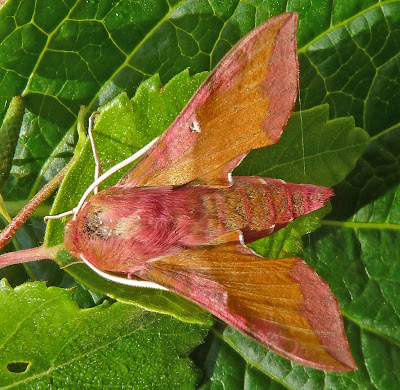 A splendid Small Elephant Hawk moth in the trap this morning...
Whilst fishing near the Mulberry a few Gannets flew east but little else apart from a few GBB Gulls
Incidentally 4 hours fishing produced 1 Ballan Wrasse and just 3 Mackerel....not an overwhelming catch, but pleasant bobbing about in the sun in peace and quiet. From tonights forecast I think this an unlikely possibility tomorrow!
Posted by Pagham Birder at 7:06 PM No comments: Links to this post

As I carried out my Breeding Bird Survey on Pagham spit this morning I was again impressed by the vegetation.... 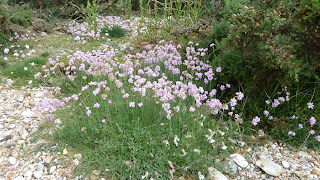 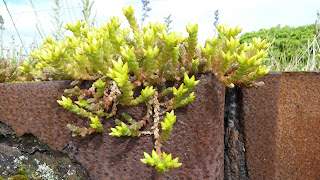 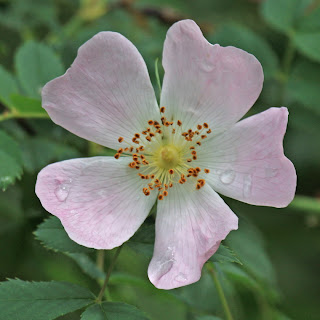 A couple of nests were occupied and it was good to discover an Oystercatcher within the fenced area. The Ringed Plover is very close to the path outside the protected area and is easily disturbed; my hopes are not high in view of the number of  occasions it will inevitably be leaving the  nest. 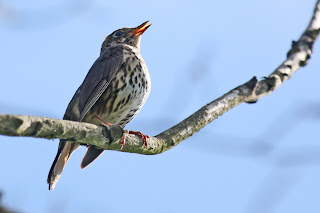 A visit to the North Wall and visitors will not have missed the Song Thrush who has been singing his heart out for the past few days down the approach track!

The Glossy Ibis is still present but then the awful discovery of a dead Buzzard in the field behind Owl Copse. I am no expert on the cause of death but the bird was in the open, face down with wings spread.

Posted by Pagham Birder at 1:39 PM No comments: Links to this post

Sorry but it was a Bunting on a Rock!


The Glossy Ibis was still present on the other side of the flooded Breech Pool besides good numbers of noisy Med Gulls.. From Pagham Spit the Black Headed Gulls on  the Island seem to be doing well and are very busy, accompanied by a few Common Terns.
Little Terns, up to 36 individuals, present over the Chuch Norton Spit and feeding in the main (new) channel.
Ringed Plover still sitting on nest after a very wet and blustery night.
Posted by Pagham Birder at 7:25 PM No comments: Links to this post

I disturbed a Ringed Plover on 'our' side who was very upset by my presence and  went into distraction mode 'broken wing' display. 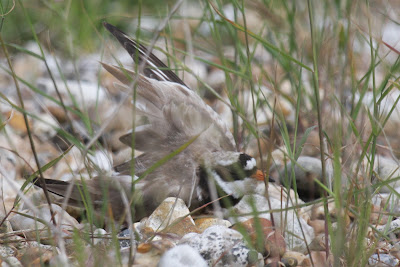 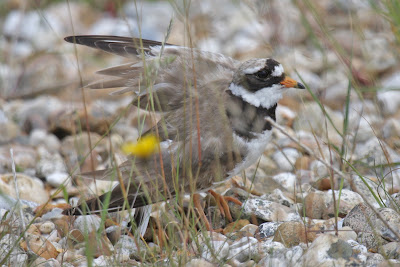 She soon settled down on her nest again,  as I beat a hasty retreat.

The Vipers Bugloss is sensational this year with more than I've seen for many a year.

Posted by Pagham Birder at 3:43 PM No comments: Links to this post

The vegetation on Pagham Spit is almost looking at its best as we enter the month of June...


My regret is that as we have lost so much shingle outside our bungalow due to erosion that we now have no Sea Kale at all! A good 30ft of splendid Sea kale habitat lost!

An interesting bird turned up today. A complete albino juvenile Starling within a flock of about 30 birds looking for leather jackets.Its beak was a pinky yellow colour and legs were light coloured too.
On reading the local paper this evening I see someone has photographed the bird in the West Meads area of Bognor during the week. So my challenge now is to get a good close up shot (naturally I didn't have my camera with me when I saw it this afternoon! )
Posted by Pagham Birder at 8:50 PM No comments: Links to this post