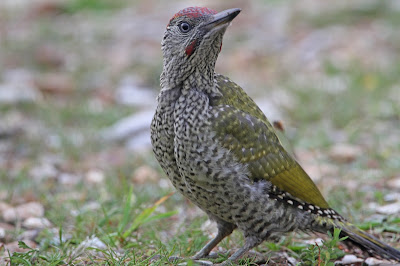 As I drew back the curtains this morning and looked out a juvenile Green Woodpecker was looking back at me!! I quickly retrieved my camera and was able to get a dozen or so shots through the double glazed windows..here's a few mostly taken when it was on the bird bath. 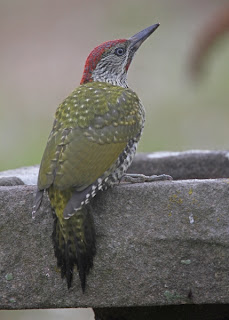 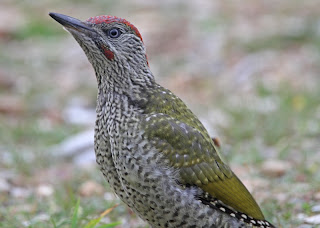 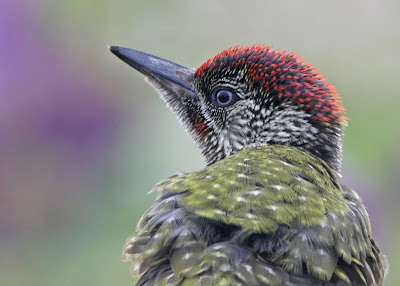 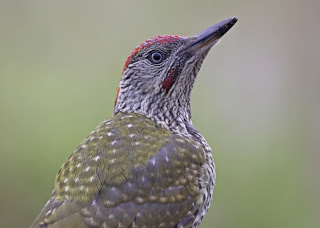 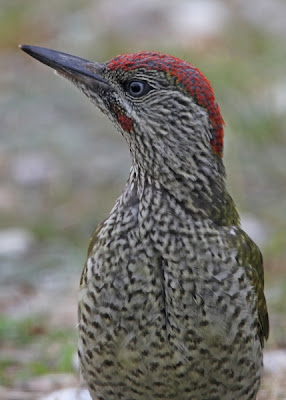 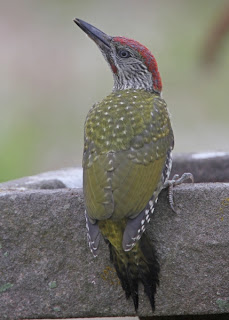 ...and visitors to the Spit don't forget the car park is now closed.  A car park is available behind the amusements near the appoach road 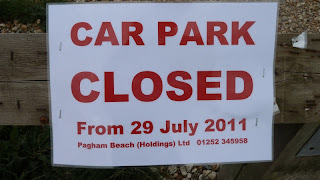 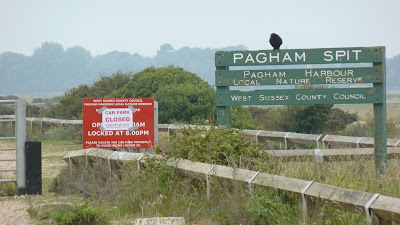 Posted by Pagham Birder at 9:51 AM No comments: Links to this post

If there are a few warblers on the spit first thing in the morning it is a pretty good indication that there are more warblers in the bushes in the North Wall area.
Having walked past Breech Pool and noted the Black Tailed Godwits in varying stages of late summer plumage I headed towards Marsh Farm in the hope of catching up with the Cattle Egret...no luck there regretably but warblers abounded in the hedgerows with a good sprinkling of Reed,Sedge and  Willow Warblers plus Whitethroats and singing Blackcaps. A few images below ...some showing just elusive they can be!
...and a close up of a scratching Mute swan! 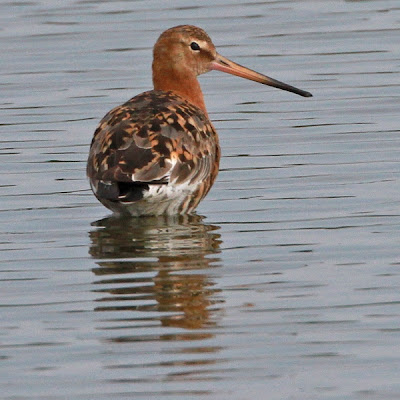 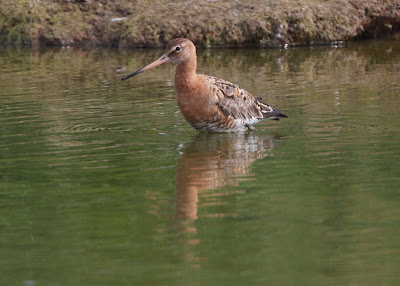 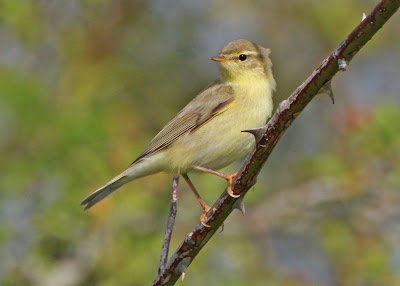 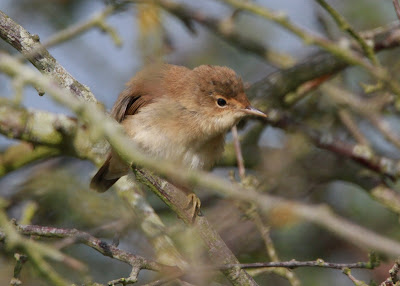 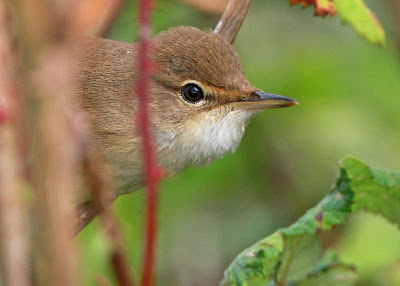 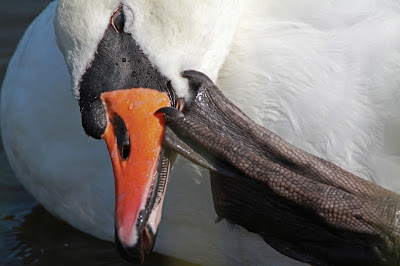 Posted by Pagham Birder at 4:43 PM No comments: Links to this post

This morning felt distinctly 'autumny'...with a heavy dew on the car and a bit of a nip in the air at 7.00am. No real surprise then that my first returning Wheatear was on one of the fence posts near the Little Lagoon.

Little else about but really good to see that a pair of skylarks have had breeding success and were seen with 2 fledged youngsters. Yesterday morning as I came out of the Spit Hide with a couple of visiting birdwatchers we watched a skylark gathering a beakfull of grubs down to within 3 metres....much to the delight of the visitors saying....'closest we've have ever seen a Skylark'.

Early afternoon and more visitors....this time in the shape of TV cameras and reporters presumably to report on the serious erosion problems on the beach and the fate of the beach bungalows which seem to be low priority compared to a rare snail...2mm in length which might be somwwhere on the shingle bank and must NOT be disturbed!! 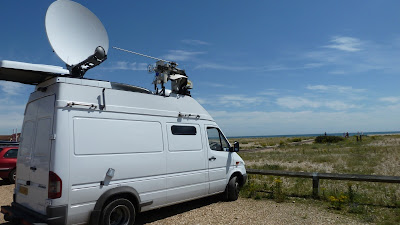 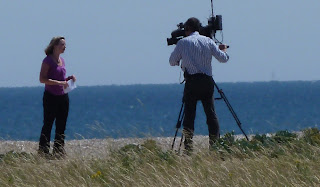 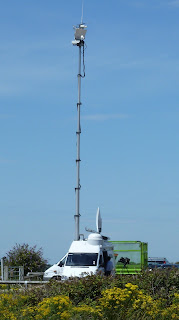 Posted by Pagham Birder at 9:47 AM No comments: Links to this post

2 Peregrines were  devouring a Swift yesterday morning on the island but this morning a single juvenile was just loafing/preening.
Greenfinches and Linnets seem to have had a good breeding season this year with plenty of juvs around...and House Sparrows would appear to have had the best season for several years.

Sand Martins were much in evidence this morning with considerable movement East. A few Swifts were going West at some height during the afternoon. We have had a Whitethroat in out beach Buddleia for the past 3 weeks and it was very busy today feeding on insects/grubs.

Apart from these bits and pieces little else.
Posted by Pagham Birder at 8:36 PM No comments: Links to this post

Visitors be advised...closure of car park

An increasing number of waders are arriving along the beach and these summer plumaged  Dunlins were amongst them this morning.
One of the Chichester Peregrines was preening on the 'usual 'island viewable from the spit 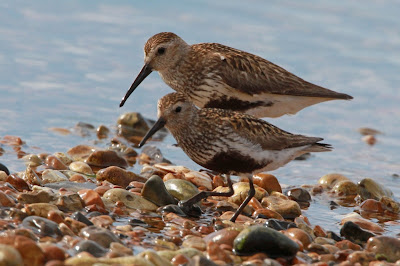 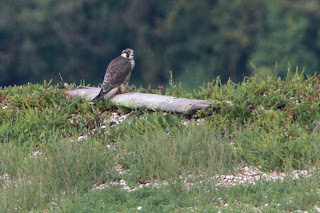 The Cattle Egret seen from the North wall during the past couple of days has again been seen today as reported in BirdGuides. Yesterday it was found in the north fields where the cattle are(notsurprisingly)but today was at roost on the heron/egret high tide roost island.
Posted by Pagham Birder at 1:44 PM No comments: Links to this post

Autumn is on the way!

A north east wind has got up overnight and a few waders were found along the beach this morning....some of them in breeding plumage. There were a few 'tortoiseshell' Turnstones but the one below was not one of them!
However, unusually for Pagham, there was a lone Sanderling - a bird  which normally prefers a sandy beach as at nearby Clymping.

Sand Martins, Swallows and a few Swifts were trickling westwards.

...and for the botanists a couple of shots of the very rare Childing Pink taken in our beach garden .

These flowers have been seen in our garden for the past 26 years....some years more than others but we always feel very priveleged  when we see them in flower. They are very tiny and have to be really looked for as the flower heads are only about 2-3 mm across. On the lower photo a greenfly can be seen which gives an indication of size! 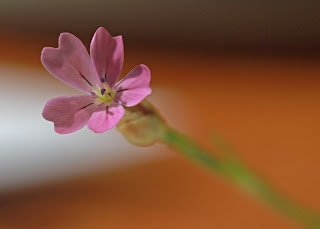 Posted by Pagham Birder at 1:31 PM No comments: Links to this post 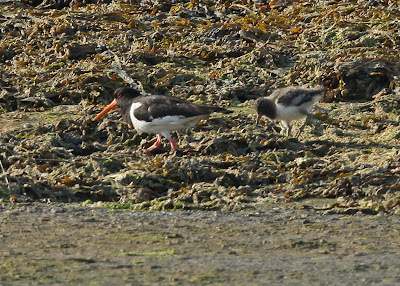 A fine start has deteriorated into a wet afternoon. The female Red Breasted Merganser is still active and feeding well in the main channel. An Oystercatcher continues to feed a youngster on the opposite spit  and the most unusual sighting was a Great Spotted Woodpecker on a post adjacent to the Little Lagoon which made off over the harbour towards Church Norton...always a surprise for  me to see a woodpecker on a treeless beach. Apart from that a few Dunlin and Turnstones on the tideline and a Ringed Plover showing concern...obviously with nest or young nearby. 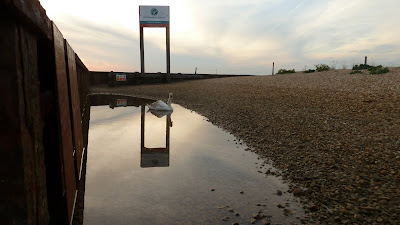 A Mute Swan  was in a pool of water near the Harbour notice board on the beach  last night and I was concerned for its wellbeing as it didn't look too good but it had disappeared by morning
. 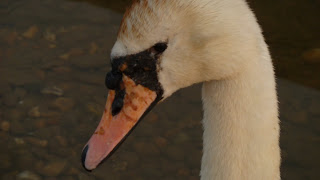 Posted by Pagham Birder at 5:19 PM No comments: Links to this post

Very little to report this morning but nevertheless a superb summer day..  Linnets and Greenfinches with young birds in attendance and flocks of juv Starlings growing larger daily! A few Curlew on the mudflats (one partial albino or 'light phase'..as seen last year at this time),several redshanks but nothing of real note.


Posted by Pagham Birder at 2:55 PM No comments: Links to this post