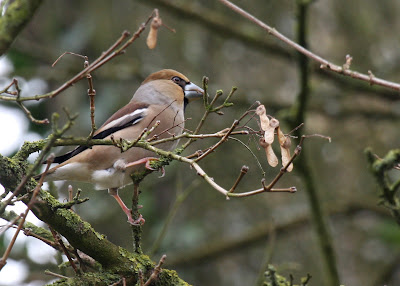 Hawfinches on Pagham Beach !.....Very unlikely but only 20 minutes away in Arundel I found the first Hawfinches I've seen for many years. Although a dull , grey sunless morning persistence paid off and I managed to get a few record shots. Apparently they have been seen for the past week so hopefully they will hang about until the next sunny day (for improved photographic conditions).
Yesterday was an interesting day with a Mandarin Duck along the Breech Pool looking somewhat out of place in his splendid 'dress'. 3 Avocets and a Spotted Redshank were showing well, Cettis Warblers bursting into song and many Reed Buntings included in the mixed finch flocks.
Posted by Pagham Birder at 5:22 PM 3 comments: 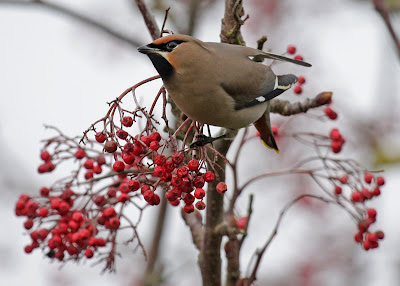 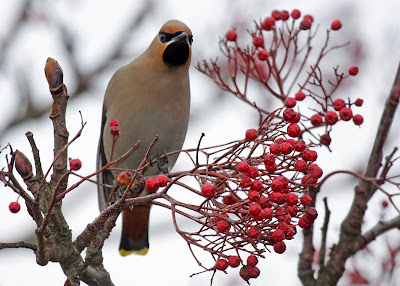 After several abortive attempts to see the reported Waxwings in Goring by Sea I I finally managed to catch up with them during the week and although the light was poor I managed to get a few shots...
Here on Pagham Beach the Brent Geese are getting restless and with the improved weather today I think they are considering returning to their homeland in the far north! A Starling was heard mimicing a Wigeon to perfection today and it seemed strange to hear the call coming from the top of a telegraph pole!
Several resident birds are now singing regularly and the thought that Spring is not far away is very welcoming.
Posted by Pagham Birder at 6:51 PM 1 comment: 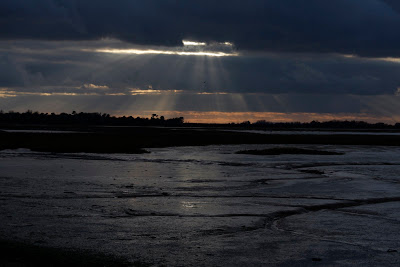 Late afernoon sun over the Harbour

As I took a walk out to see the water levels in the fields bordering the North Wall I realised I hadn't updated my blog for a week or more. Well, last Monday we awoke to a sprinkling of snow and having then turned on the news, realised we had been more fortunate than most. Deep snow had fallen in the the south east and was causing traffic chaos! Since then we have had a mixture of cold,cloudy weather but last night heavy rain had left many places under water...again living virtually on the shingle beach we are fortunate in that the rain drains away quite quickly. As far as the birds this past week 5 Avocets have been present, 2 of them still hobling on one leg. An oiled dead Gannet has been washed up on the beach and this afternoon I came across a flightless Brent Goose in the harbour. It was able to run across the marsh evading capture but was unable to fly although it didn't seem to dragging a broken wing.
From the North Wall all the fields are under deep water but on a few remaining 'islands' there were huge concentrations of birds including c1000 Black Tailed Godwits, 750 Golden Plover, 500 Lapwings besides flocks of Wigeon and many Pintail, Shoveler and Shelduck. A couple of large flocks of Brent geese were wheeling over the flooded fields and must have totalled 1500/2000+....a fantastic sight.
On my return along Slipe Field I heard my first songs of both a Chaffinch and a Greenfinch so I guess Spring is not too far away....nice thought.
Posted by Pagham Birder at 5:02 PM No comments: