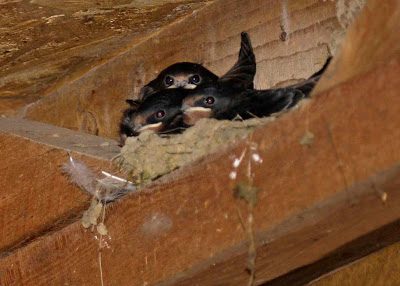 An early inspection of the nesting Swallows yesterday morning revealed that the door had been opened despite being wired up and the open observation flaps had been shut. Thankfully, I had removed one flap in case of such an eventuality. The swallow parents were flying round anxiously so I quickly opened the flaps and secured the door after first ascertaining the youngsters were still in the nest, took a record shot and beat a hasty retreat.

(The previous evening as it was getting dark I noticed 3 lads with fishing rods appoaching the end of the spit and in the gloaming saw them through binoculars fishing in front of the hide...)

The good news is that the parents were feeding them again this morning!
Posted by Pagham Birder at 10:37 AM