Having received  a report of a Great White Egret in the harbour yesterday I got out at 7.30am but alas, no joy. Plenty of Hirundines still about and Greenshanks calling plus a wheeling flock of Golden Plover and the usual Peregrine on New Island.  However having had to go out most of the morning I returned early afternoon to find an email re. 3 (sleeping) Spoonbills in the harbour (thanks Peter C.)  Sure enough I located a Spoonbill but only one and it was feeding way out in the middle of the harbour....unfortunately unphotographable (is there such a word! ).

A pair of Stonechats has taken up residence by the spit hide and they were quite obliging! 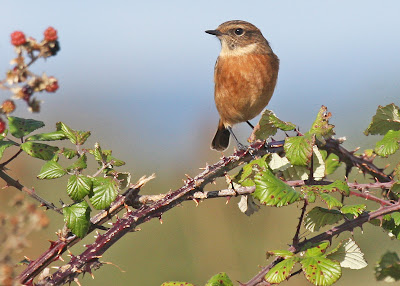 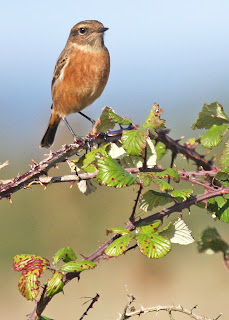 Posted by Pagham Birder at 8:09 PM